I don't live in Seattle and therefore don't usually get the opportunity to watch the Pete Carroll Show on Sunday night like I did last weekend. It's available on Seahawks.com, but it's not something I frequent regularly. What I remember from last weekend's show was the excitement about the Seahawks getting a much needed and "unexpected" win, but also the scrutiny about poor redzone performance and the inability to put this game away early.

Pete Carroll made it clear that this could've been a big win, and it wasn't. It showed this young team can take advantage of an opportunity and has potential, but there is a ways to go. The thing I took from the show above all others was Carroll saying the Seahawks needed to go "back to back." I'm not expecting them to win in St. Louis, but I think if the team that showed up against the Ravens arrives in St. Louis, or even one that proves a bit sharper than they were last Sunday, they can win this game.

The Ravens game was my fourth in-person game of the year. For me, this win was more convincing than the one against Arizona. Though it came down to the end, Seattle held the ball to close the game. Let's not forget Seattle sat 1st and 20 on their own 10 at the beginning of the nearly six minute drive. They dug an early hole, but pulled themselves out and closed with authority.

Seattle is trying to take a step forward by winning two games in a row for the first time this year. Because they are theoretically trying to build on their performance last week,  my motivation for this piece was to highlight a few plays that jumped out both in person and again when re-watching the game that could make a difference this Sunday.

First and foremost, the Seahawks need to set the tone early. This man needs to help that process along. 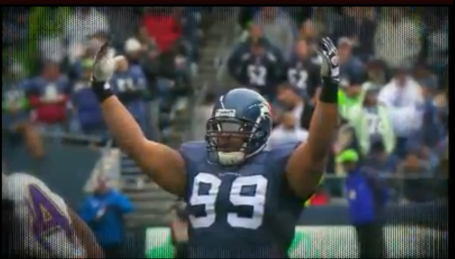 Even from my upper deck seats, it was hard to miss all 6'6, 330 of Alan Branch trying to get the crowd fired up. Yes this weekend is a road game, but the attitude needs to remain.

Branch was a tone-setter in a flag-free manner - Seattle has been struggling with unnecessary personal fouls since after the bye. Last week Branch delivered a blow on Ricky Williams after a Joe Flacco dump off. Let's take a look. Branch is the defender on the top of the screen. He's in a full run after shedding the blocker.

Another defender has wrapped Williams' legs and here comes Branch...

...who has effectively replaced Williams in the space he was previously occupying.

And now it's time for Branch to talk some smack to the little guy. A little, flag free tussle ensued as the linemen come in to help their back.

This week the Seahawks have to deal with the beast that is Steven Jackson. Alan Branch will be a part of the gameplan against Jackson. Steven Jackson isn't so little and Sam Bradford trusts Jackson as an outlet out of the backfield. Branch must be an enforcer once again.

Richard Sherman has garnered a lot of praise with his physical coverage and quick impact for this secondary. And while I'm not trying to rain on the parade, because the guy has performed above expectations, one play from Week 10 concerned me.

I'll preface this by saying I really like Brandon Lloyd. He's a crispy route runner with underrated athleticism and a knack for the absurdly acrobatic or big play.

On the Ravens' second possession last week, they took a deep shot to Torrey Smith on a double move. If Flacco had made a better throw, Sherman would have been the victim.

It's 3rd and 10 from the 27, Sherman is in man. Smith is cutting out at approximately the first down marker. Sherman is flipping his hips to follow. 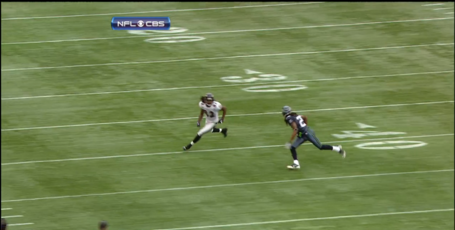 Sherman bit on the out  and flipped, but now Smith is making his cut upfield. 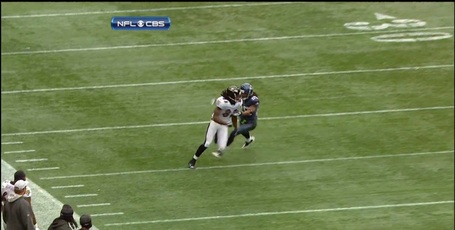 Sherman tries to recover and gets away with what looks like a slight grab, but Smith is already out in front. 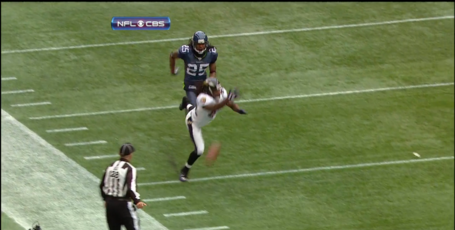 This is the ball coming down just out of Smith's reach. This play happened pretty much right in front of me - obviously I was lots of rows up - and I remember thinking the Seahawks got away with one here. Sherman won't be able to get away with this on a weekly basis. Given Lloyd's ability and general veteran savvy, Sherman (Brandon Browner, too) needs to be on full alert.

It's all about the ball, my preciouussss

Last week Seattle won the turnover battle by 3. They took care of the football, took advantage of some opportunities and showed a solid team effort in obtaining/protecting the ball. For example; Ben Obomanu had only one catch, but came through in the clutch. I like seeing the veteran lead by example here. 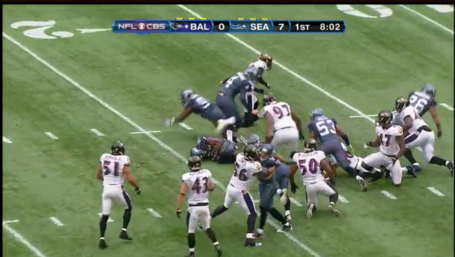 This screen shot is during the first fumble recovery on a kickoff. The Seahawk on the ground in the fetal position among the muck is Obo. Instead of trying to get something extra on the play, he proves here the most important part of this situation is simply securing the football. It's locked in his grasp as he is still on the ground; thus, his preciouussss. Seattle needs to carry the take care of the ball mentality into Week 11.

The Seahawks allowed one sack in Week 10, a strong result considering the Ravens' high sack total going into the game. This week Seattle will have new starters at right guard and tackle, so the performance of the line will be under the microscope.

Last week the line gave Jackson ample time to throw on many occasions and he played a solid game. However, he was unable to take advantage of a couple major opportunities. The following play stood out.

The Seahawks are in a one back, two tight end set. Miller came in motion from the bottom to his current position off right tackle. The Ravens are in a 4-3 look.

Right after the snap we see Seattle is trying to run a quick screen to Rice - this is a play Seattle was successful with against the Bengals. Williams is going out for the block and Miller is hidden behind a defender, but on the 20 yard line and charging behind Williams.

Jackson never throws the ball. Was this a fake? Williams and Miller both look to be in route, not looking to block. Lynch and McCoy are going into their routes on the bottom of the screen. The offensive line is holding their ground and Jackson has time to survey the field.

Jackson still has so much time. Here note Rice now streaking across the middle, as Jackson appears to be looking down the left side of the field.

Finally the pocket collapses, but after at least four seconds has ticked off the game clock. Jackson has located his receiver.

This shot is a split second later than the one above. Notice Rice is now open, 1 on 1 with the linebacker. Both Lynch and McCoy are moving to the left sideline with the flow of the play, simultaneously clearing the throwing.

The ball will land left of the CBS logo, around the S. Given Rice's position, Jackson could have thrown it more up and less across the field. But as shown in the picture above, Jackson's hips are open and potentially affecting the direction of the throw. He lofts the pass, instead of putting something on it and running the risk of an inaccurate throw.

Here you can see that Rice has continued to go across the field as opposed to towards the end zone. Jackson had a large window to throw into, but by putting the ball where he did the defensive back on that side of the field now has a chance to make the play.

Rice is preparing to dive for the catch, as the ball has floated well outside of where a perfect throw would've gone. There's that defensive back, ugh.

Because the ball floats, the defensive back is able to make the play. He never looks back, but also doesn't make contact, and the ball hits him in the helmet. Rice gets up looking for a flag that isn't coming.

The Seahawks missed one here. Regardless of whether or not the screen was botched or a fake, Seattle almost made something out of nothing. The offensive line gave Jackson the chance, but can they continue to give him time with new personnel? Also, Jackson couldn't finish the play with a strong throw. He needs to start converting crucial red zone throws, broken play or not, for this team to consistently win games.

After the Seahawks' final first down in Week 10, Unger (# 60) got off of the pile and did the following: 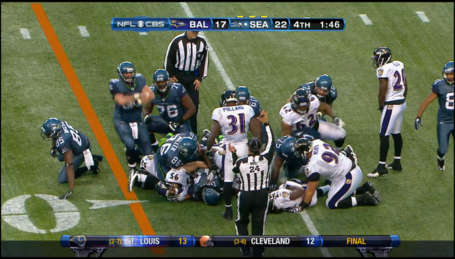 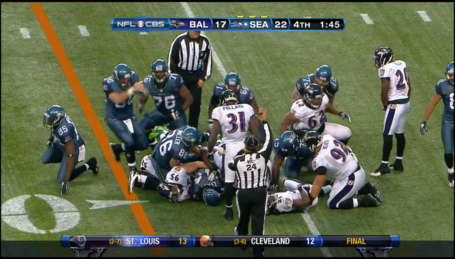 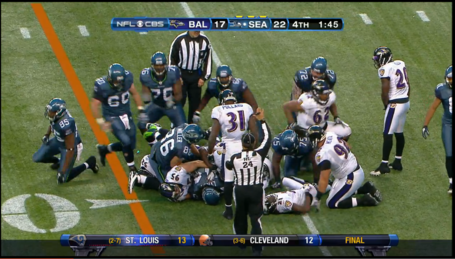 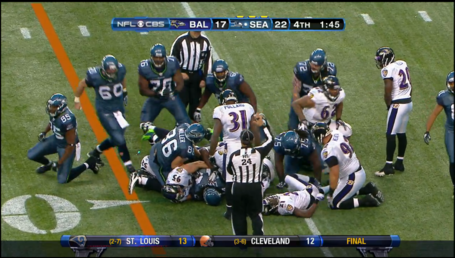 Nevermind that Aaron Rodgers is connected with the heavyweight belt celebration; Unger looks pretty darn pumped about the performance his offense just capped off. The third year player is emerging and his run blocking has been a positive factor for this offense. He needs to get this newly gelling line going in the running game, and hopefully we can see more heavyweight belt.

Seattle showed in Week 10 they aren't rolling over in the second half of the season, but instead are focused on winning as many games as possible. A win in St. Louis would mean Seattle's most consistent stretch of winning this year, and at the most opportune of times. It would give the team the opportunity to return home for the first of three in a row, simultaneously looking for their third consecutive win. Right now they must simply focus on winning two in a row for the first time this year, hopefully giving the 12th man a victory we can be thankful for on Thursday.