The Seahawks definitely won this one with their defense, stifling the Rams' struggling offense throughout.

I've quoted to you the numbers. 185 total yards allowed. 2.5 yards per carry given up on the ground. Two fumble recoveries. One interception. Five sacks. Seven quarterback hits. After Sam Bradford's pass to Brandon Lloyd for a touchdown in the first quarter, the Seahawks allowed the Rams past midfield twice.

Kenny has also quoted you the numbers: The Rams scored their only points of the game when they started on the Seahawks 27 yard line. Their longest drive was 8 plays for 42 yards. They had four drives go for 0 or negative yardage (not including the end-of-game knee by Sam Bradford.)

When your defense plays that brand of football it's kind of tough to pick out any 'play of the game' because the performance was so damn consistent. That being said, there were a few in there that stood out more than the rest, so let's take a look...

The Rams are in a five-wide look here on 2nd and 10. The Seahawks rush four, and in this case Chris Clemons badly beats the Rams new starting left tackle. It's not particularly impressive when taken in the context that this guy he's going against was playing in relief of the backup tackle Mark LeVoir, but the outcome certainly made a big difference in the game.

Clem gives Kevin Hughes a shove and bounces out and around him easily, swats the ball from Bradford's hand, and the Seahawks recover. Keep in mind that at this point in the game the score is still 10-7 Seahawks, so it's a seminal play (that sounds bad but you know what I mean). 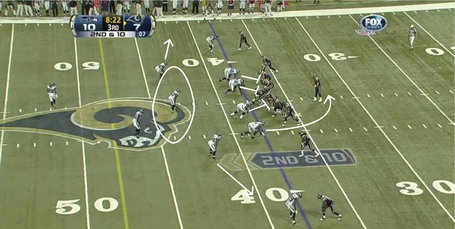 I'm combining two plays into one because I just really like Brandon Mebane. First in the opening frame, Mebane knifes through the line in the A-gap and stonewalls Steven Jackson (get it, Stonewall Jackson?) in the backfield. He did so with a quick first step and good technique. And because he's awesome.

Similar play in the second quarter, 3:26 remaining. Again, Brandon Mebane uses a quick jump off the snap to get into the backfield through the A-gap, even before Sam Bradford has handed the ball off to Steven Jackson. Again, a three-yard loss for the Rams. I'll just take this moment to point out that Mebane had himself a good game.

Here's a split-sack by Red Bryant and Chris Clemons, where persistance and motor pay off for the two Seahawks' defenders. Now, again - the Seahawks were going up against 2nd and 3rd string offensive linemen so in the big picture this play doesn't tell you a whole lot, but dammit, it was fun to watch. Red Bryant plays angry.

On this play, Raheem Brock starts as the DE, Big Red as the DT and the Seahawks are in their nickel package. Brock stunts behind Bryant, and Red, for his part, uses his quicks to get around the Rams' RG and then RT. Pretty impressive for a big man, regardless.

The feather in Chris Clemons' cap. Clemons takes advantage of a mis-match, using a simple upward swim-move to get around Hughes. The Seahawks brought six on this play - the four down linemen, Earl Thomas from his safety spot, and David Hawthorne -, keeping the heat on the Rams until the very end.

Clemons forces his second fumble and the Seahawks recover. 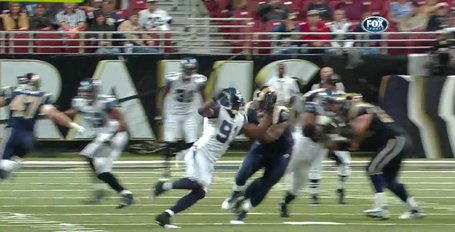 This play doesn't need a whole lot of introduction - The Rams in 2nd and long so the Seahawks drop Red Bryant into coverage. I think that Charlie is going to break down this play in a little more detail so I won't do it here, but the decision pays off - the ball is tipped at the line and intercepted by Red Bryant, who does this...

via BigTrain21, the gif magician.

Vote on the Top Defensive Play of the Game below y'all.