Red Bryant made one of the top defensive plays of the season for the team against St. Louis, when he intercepted a twice-tipped pass after dropping back into zone coverage. While this is the first big-time play we've seen as a result of this schematic wrinkle, dropping the defensive tackle is something the Seahawks have done with regularity this year. Now, 'regularity' can mean a lot of things, but here I use it to mean at most a handful of times a game and it's something they've broken out a little bit each week.  It doesn't always work, but it can be effective.

During the preseason Gus Bradley "joked" during a Seahawks.com, Tony Ventrella piece about the possibility of having Red out in the open, dropping into coverage. It seemed almost like Bradley was half kidding about the prospect of having such a large man in coverage, which on the surface seemed somewhat unorthodox. Clearly, he wasn't.

The Seahawks have used both Bryant and Alan Branch in this coverage role. While both of these men are primarily seen as run stoppers, I like the idea of dropping them into short coverage because their unique size and movement ability creates some scheme versatility - both of the following plays are in nickel, where Seattle can defend the run or pass. Both men are extremely intimidating when controlling the middle, too. I mean, you imagine catching a pass on a short cross, then running into 330+ pounds of angry man.

I highlighted a four man pressure from the Cincinnati game where the Seahawks dropped Branch in a very short zone, along the line of scrimmage and in the middle of the field, his job being to protect against the scramble and generally be disruptive. I liked this strategy because it puts a mobile giant in space and limits the quarterback's ability to make a play when the pocket breaks down.

The play Bryant intercepted the pass on is an evolution of this idea, and is very similar to a play I noticed the Seahawks use against Baltimore with Alan Branch. This is a unique idea the Seahawks have been scheming into a growing defense and it's paid dividends on a few occasions.  Let's take a look.

The first play is from Week 10. The Ravens spread it out and then motion Ray Rice into the backfield. Branch is the defensive tackle over left guard. Notice Hawthorne defending the middle behind Branch, Hill in the slot as the weakside Nickel 'backer. It's 3rd and 8, a passing situation. 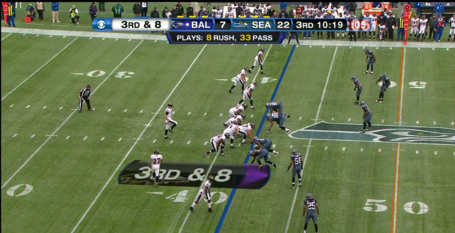 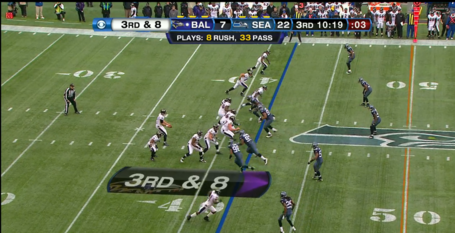 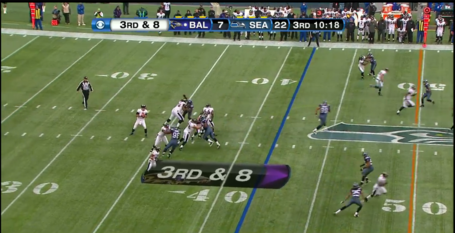 Branch is dropping with his attention on the receiver-overloaded side. Torrey Smith (the top receiver) will eventually get the ball. He is getting jammed by Browner, who will ultimately not factor into the rest of the play. Keep your eye on Roy Lewis, the Seahawks' corner currently near the top 50. 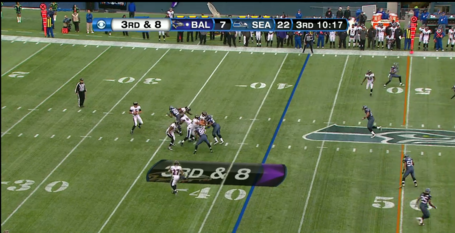 Branch has dropped 6-8 yards, a couple yards shy of the first down marker in the middle. Nothing appears to be open downfield and the pocket is collapsing. Flacco ignores Rice on the right side and looks towards Smith on the left side. Browner will drop, and that bodiless-arm in the picture belongs to Roy Lewis. 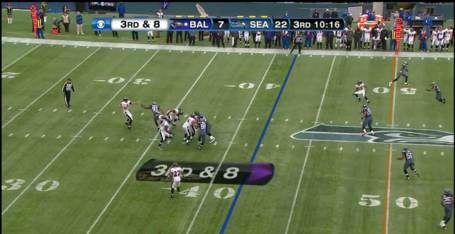 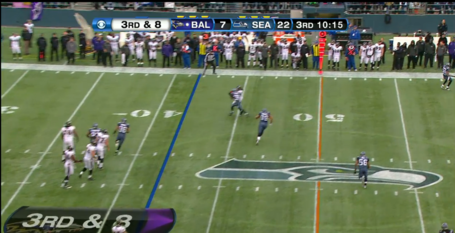 The bodiless arm is now Roy Lewis all over the ball. Branch is on his way to the spot, but notice he doesn't move far from his spot until the ball is out and basically to the receiver. 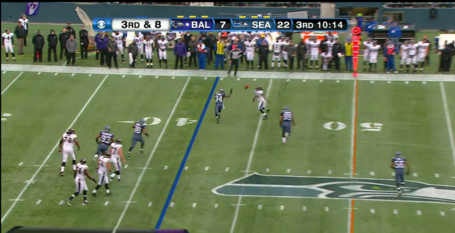 The ball is tipped and up for grabs. Smith is the nearest man but Branch is bearing down. 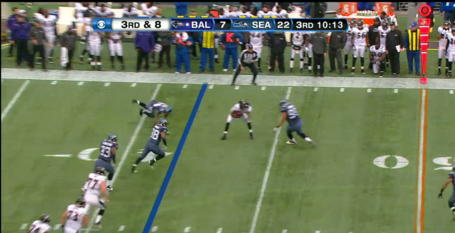 Smith makes the catch. And now he's thinking "oh, crap, no wonder we decided to abandon the running game." 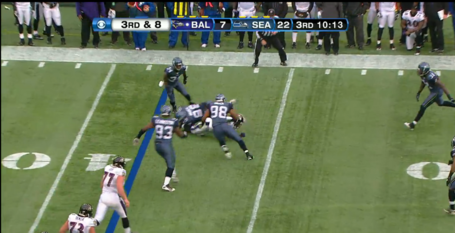 Instead of getting trucked, Smith goes to the ground. This was a crucial third down stop for Seattle. They kept Baltimore from gaining any momentum and were able to get pressure with just three rushers, while taking away the middle of the field with one of their most mobile lineman. Furthermore, Branch was able to keep the receiver from gaining any yards after the catch, after his teammate made a good play to deflect the ball. For a team that is struggling to get pressure consistently and capitalize, consider this a successful play even though they didn't get the sack.

Now onto the play we've seen way too many times and want to see again. Click here to see Danny's top five defensive plays from Week 11, which includes a GIF of the interception.

Notice how both play one (3rd and 8) and play two (2nd and 19) are passing situations. Here Seattle is in nickel again. However, play two has a few minor differences. 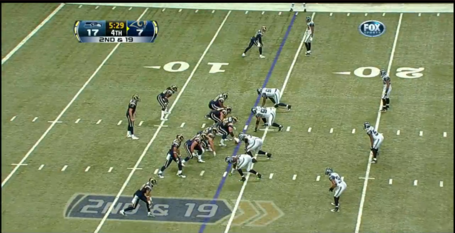 First, Hill is now to the top of the formation. Consequently, notice that Bryant is the defensive tackle over right guard. The Seahawks appear to have flipped their formation. The receiver that is covered by Row Lewis in the slot (on bottom) will eventually get the pass, around the 21 yardline outside the right hash. Beginning to notice a trend of Roy Lewis making impact plays as the third corner?

(Just a general FYI; there are only 10 players shown because this is the camera shot from the game. The Rams have a receiver to the bottom, out of picture, covered by Richard Sherman.) 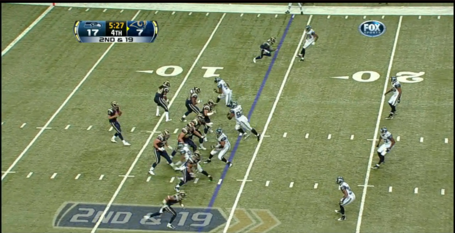 Like the first play, only three men rush. Red starts in, but stops. Just like in play one, the linebackers and corners drop back. 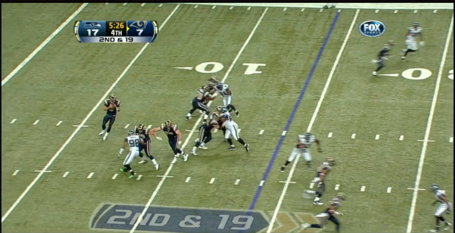 Red is in the middle of the screen and retreating with authority, and facing the receiver-heavy side like Branch did in play one. 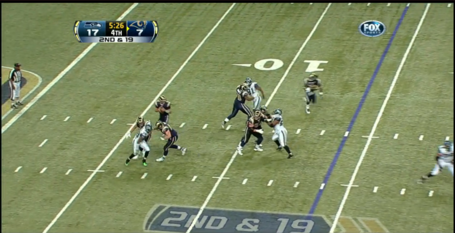 Now everyone is out of the picture except Red, still in his drop but now flipping towards the quarterback. Also, notice Mebane fighting a double team in the middle. But, he's about to make the first part of this play. 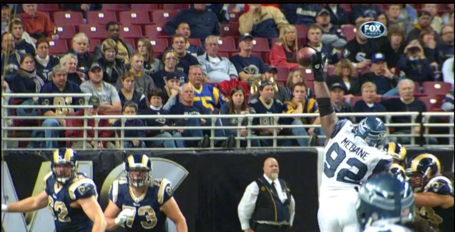 Mebane tips the Bradford pass, which is a major factor. It starts the domino effect. 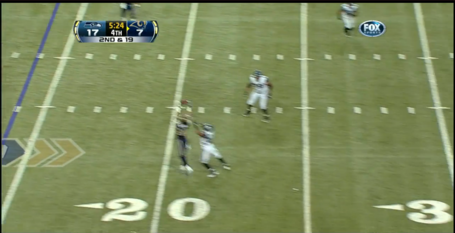 The receiver goes up to get the tipped ball with Roy Lewis breathing down his neck. Red has dropped about 8-10 yards which is a little deeper than Branch was, potentially because of the extra distance on the down (19 yards compared to 8). One thing that gets lost in the snap shots, as the camera footage doesn't show this; Pete Carroll said that Red dropped with great technique, and commended his discipline for staying in his spot long enough to get a read on the about-to-be-deflected again ball. 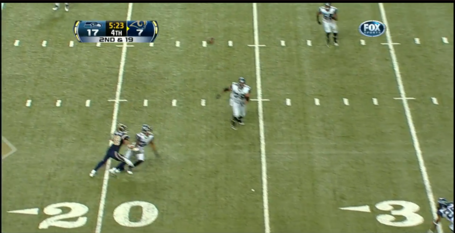 The ball is up for grabs, but unlike the tipped ball in play one this is anyone's ball. Plus, the two closest players are Seahawks. 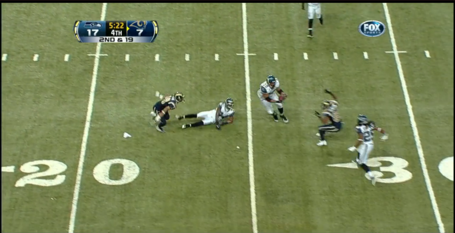 Ball skills and soft hands by the big man, who reportedly played tight end once upon a time. The receiver with his two hands up is thinking "dive button!" 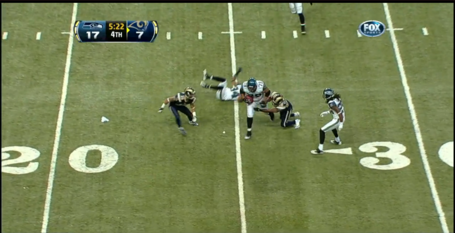 Dive button didn't work. Also, notice Red has the ball away from the defender. What's coming up is one of my favorite parts of this play; Bryant's cognizance about taking care of the football. Austin Pettis, the receiver who couldn't make the catch, is closing in on Red. 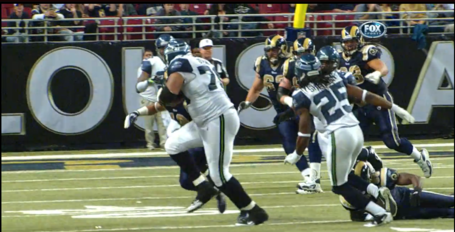 From this angle we see Red has switched the ball to his left hand, a savvy move for a guy who doesn't handle the ball. Maybe we'll see him on offense. At fullback? Maybe out on a swing route, like Jim Harbaugh has done on a few occasions with his more athletic offensive lineman. 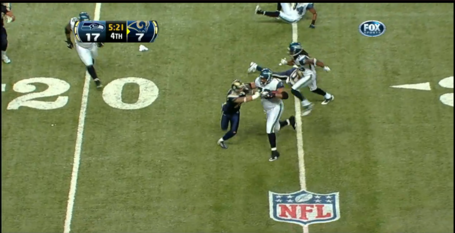 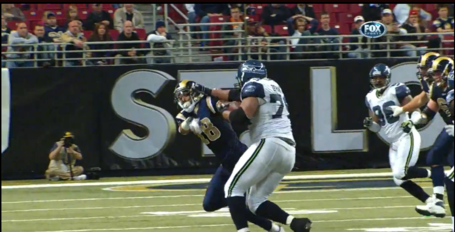 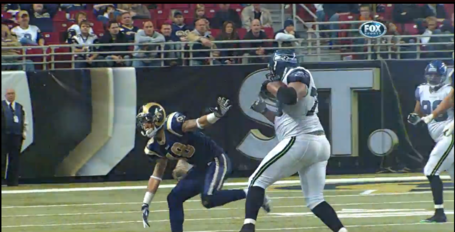 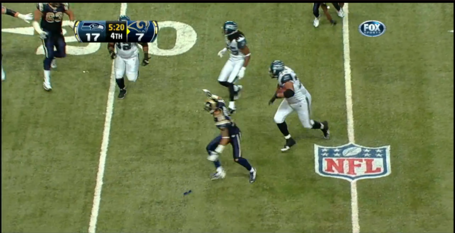 Look at that stiff arm. Somehow Pettis stays on his feet and eventually makes the tackle. But still, really nice execution by the big fella.

So there you have it. Not only can both big men stop the run with authority, but they can be effective in space as well. We've seen the Rams and Ravens both have trouble running the ball and then opt to spread it out, and I think it's awesome to see Seattle using the length and mobility of both big men not only around the line of scrimmage.

In both scenarios, Seattle has the lead and therefore more flexibility to call a play like this. Furthermore both examples show them utilizing Branch and Bryant on passing downs, a key to this play working being they need to get pressure with just three rushers. When it happens, great. When it doesn't, there are holes to be exploited.

These two plays show there is some versatility built into this defense and these two run stoppers are here to play a variety of roles. It's just another example of how Carroll and John Schneider successfully find players with unique skill sets and athleticism to add potential to the roster. Hopefully we'll see more success with this wrinkle in the coming weeks.