I liked this play for a number of reasons, but principal among them was Marshawn Lynch's three-point stance, shown in the image below. Just drink that in, folks. A beast ready to strike. Anyway, that was cheesy.

There are real reasons I like this play, and I'll tell you about them. First off - look at the down and distance. It's 3rd and 1 in the from the 3 yard line. Seahawks are up three, midway through the third quarter and you know if they come short on this play, the media is going to crucify Carroll for whatever it is he decides to do, - whether it's to go for it Big Balls Pete Style, or to play it safe, boring, and pansy-ass style and kick the field goal.

So, to avoid all that, I really like that Lynch just went ahead and scored the touchdown on this one, despite the real play call not really working how you'd like it to.

I also like it because it's unconventional, at least in a personnel sense. I don't know how often the Seahawks use Lynch as the fullback but it can't be more than once or twice a game, if that. Michael Robinson is sitting back, a few yards further than he's used to, just ready to crash through the line for a touchdown, but they wouldn't call his number this time.

The Hawks are going to run a basic run play here - with each lineman downblocking to their right and right tackle Breno Giacomini reaching to his left. Anthony McCoy is going to seal to his right and create a hole in the C-gap for Lynch to hit hard. 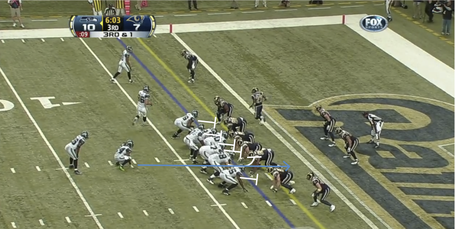 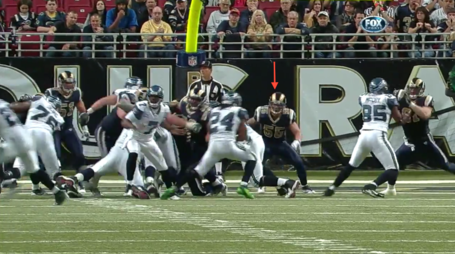 Here you can see that the line has actually done smashing job opening up the running lane of the meaty defensive linemen, but the Rams' venerable linebacker James Laurinaitis is going to be right there to take Lynch on head first.

Lynch wisely decides to bounce this one to the outside and despite the announcers arguing over whether Anthony McCoy held Chris Long or not (he didn't), Lynch out runs Rams' safety Craig Dahl to the edge. It's a pure speed play by Lynch after the Rams smartly respected his ability to simply ramrod through the C-gap.

Lynch shows his versatility and lateral agility by bouncing it out to the sideline and beats the safety Dahl to the corner. A big, big 3rd down play that set the tone for the rest of the game and began to put the Seahawks away. Had they settled for three here, or worse yet, gone for it and failed, who knows what would have happened. (I mean, they probably still would have won, but that kind of thinking makes this more dramatic, right?)