Updated: Brock Huard actually just broke down this play for his Chalk Talk about 15 minutes after I posted this. As could be expected, it's an even better look at the play by Huard that works as a great addendum to my piece. It's validating that Brock makes some of the same points I just did - and the detail he brings is excellent as usual. I've attached the video at the bottom of the post so give it a watch.

Each week I break down a "power play" of my choosing - sometimes I like to look for 'power' in the truest sense of the word, with players winning individual battles and smashing their opponents in the mouth, bending them to their will, outmatching them physically. Other times I like to look at plays that were powerful in the sense that they made a big impact in the game, and that's more where the following comes in.

Screen passes, in general, rely less on smashmouth football and more on slight of hand, misdirection, timing and finesse. Oftentimes you need to have a little luck when it comes to the opposing defensive call. I've talked about the Seahawks' use of the screen pass a little bit here this season - Marshawn Lynch and Justin Forsett had some success with it back in week four against the Falcons that I thought was encouraging - but in general the screen has been anything but the Seahawks' bread and butter. In fact, it's sort of been a bane to their offense, falling short on key third downs, moving the Seahawks backwards, failing to develop at all, and in general just frustrating the hell out of me.

That's why I always like to point it out when the Seahawks run a well-executed screen pass and in this case it went for a very big (at the time) touchdown. Here's the situation: 1st and 10 at the Redskins 20 yard line, 11:08 in the 2nd quarter. Up to this point in the game, it had very much been all Washington, including a 14-play, 80 yard, 7:49 clock eating drive in the first quarter that went for seven. The Seahawks, by this point in the 2nd frame, hadn't gotten past midfield and were looking listless.

However, with 11:19 in the 2nd, the play before Lynch's TD, Brandon Browner picked off a Rex Grossman pass, flipping the momentum in the Seahawks' favor and putting them deep into Washington's end of the field. The Hawks needed to keep the momentum gained and punch it into the endzone.

For their first down play, Darrell Bevell dials up a screen pass, a play-call that I like in this situation, considering the Redskins' very formidable pass rush and taking into account the down and distance. In a first down and ten situation deep in their own end, most defenses aren't thinking screen pass. They're probably more apt to be thinking, let's get to the quarterback and take these assholes out of field goal range or create a turnover, or something along those lines.

This plays into Seattle's favor. Below you can see the Seahawks are in their "21" personnel - two running backs, Marshawn Lynch as the tailback and Michael Robinson as the fullback, and one tight end, Zach Miller, set to the right in-line. Sidney Rice and Mike Williams are out left on the wing, and the Redskins run a man coverage scheme with their cornerbacks, leaving the right side pretty wide open.

One notable and interesting wrinkle in this personnel package is the fact that Paul McQuistan has switched spots with Breno Giacomini and is playing RT, with Breno moved into the RG position. On one hand I'd say this is a grievous tell of what was coming next (McQuistan pulling downfield) but on the other hand it's just another way to make the defense think and thus react more slowly. 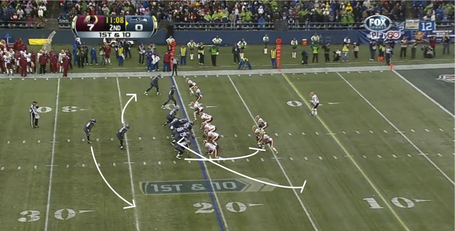 As you can see, Mike Rob breaks to the left, Marshawn right. As I illustrated above, Zach Miller releases downfield to take on the middle linebacker and seal him off, and right tackle Paul McQuistan hesitates before releasing under Miller to find the outside backer to that side. 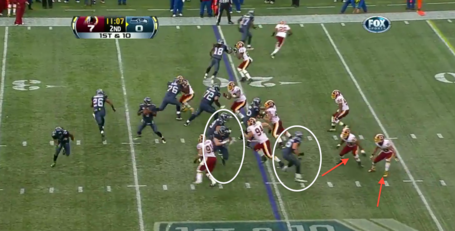 The Redskins send five and the Seahawks do a great job of executing the play quickly enough to avoid the oncoming pass rush of an unblocked Ryan Kerrigan (bottom left center above, #91) 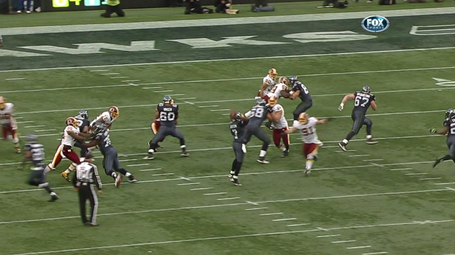 Breno and Max Unger do their jobs, as seen above, and Tarvaris Jackson passes to Marshawn Lynch to avoid the sack by Kerrigan. All part of the plan. Gooooooood, gooooooooooood.

Lynch reels in the pass, looks downfield and has blockers in McQuistan and Miller. He has two Redskins linebackers and a safety to beat.

As you can see above, the big redhead does his job with a cutblock. Miller, as can be expected, does his as well. This leaves Reed Doughty in the secondary, but he overplays to the sideline and Lynch smartly cuts it back inside.

Now, here's Brock Huard doing what he does, from MyNorthwest.com: