What, Richard Sherman again? But Danny Kelly already dug deep into his play on his game ball of the week writeup. Well yeah, but does that mean there isn't more to talk about? In the immortal words of senator Clay Davis: sheeeeeeeeeeeeeit. Of course there is.

Richard Sherman was my favorite of the many DB additions we made this off-season. That's not saying too much since I didn't really love any of the DB additions we made and was (and am) mostly excited about our 2010 draft picks in the secondary developing, but Sherman stood out to me. I never figured out what Legree's role with us was supposed to be (though I wouldn't have predicted him being kicked to the curb and getting no interest from anyone in the league) and when scouting Byron Maxwell I found him to be noticeably stiffer in movement than Sherman.

So. If anyone was to start from our young additions, I'm glad it is Sherman. That still doesn't exactly make me ecstatic to see him as our starting CB2, and I would walk 500 miles (and 500 more) to see an elite cornerback in a Seahawks uniform. Johnathan Joseph dammit. Ahem. Sorry.

I'm not trying to take away the Prestigious Field Gulls Game Ball from Sherman. Considering he was a fifth round rookie in his first NFL start, there's not much else to say about a performance than "that's pretty good", with an interception, an interception caused and two more passes defended.

But there's a few footnotes that are crying out for attention. For one, it's hard to miss that when Sherman stood out in the preseason, it was in running tight coverage on go routes, and here he is making two big plays running tight coverage on go routes. In fact, my first note on A.J. Green was, "this guy runs a lot of go routes". The go route is an ideal route to cover for someone of Sherman's athleticism and ball-tracking skills. The fact that he was on Green most of the day (Sherman played offensive right corner) means he was rarely asked to cover more complex routes. Which in turn kind of explains his criticism of Green.

And because I enjoy linking to myself to an indescribable extent, I'll reiterate this defense is currently optimized to beat teams of Cincinnati's mold. These run-to-setup-pass, take-what's-given passing offenses with clearly limited quarterbacks are candy to our defensive players, and while losing our two best corners (by my estimation) certainly hobbles the defense, it doesn't  change what the defense is good at doing.

In other words, this was kind of a perfect storm for Richard Sherman and our defense. Next week, playing Dez Bryant, Miles Austin and Jason Witten is the opposite of the perfect storm. It might be an F5 tornado. {beat} Good Frith, not an F5. Quick, Bill Paxton, save us with your blandness.

Some game notes after the break.

In the first Bengals drive, Sherman got two and a half tackles, but wasn't actually targeted a single time, rather coming down from his assignment to make the tackle each time. During the game (and in the recap) I noted Sherman was being targeted a lot, but that was a misread. The Bengals threw to the right a lot, but rarely at the receiver covered by Sherman.

This was actually the first time Sherman was targeted all game. On this one Danny noted "it looked like he probably should have had help over the middle from Earl Thomas". Well. Yes. Sort of. But not really. This one is dead right from the snap: 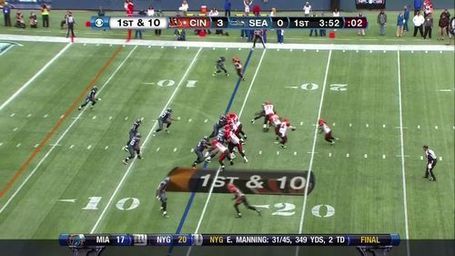 Richard Sherman allows Jerome Simpson a free release. Earl Thomas and Kam Chancellor had the deep halves but Earl Thomas sneaks up to cover the Bengals fullback Chris Pressley (there is no slot receiver on this play) who is releasing for an outlet option. But the real problem is K.J. Wright, and possibly David Hawthorne. Wright bites really hard on the play-action, and then flails around trying to recover when he realizes he messed up. 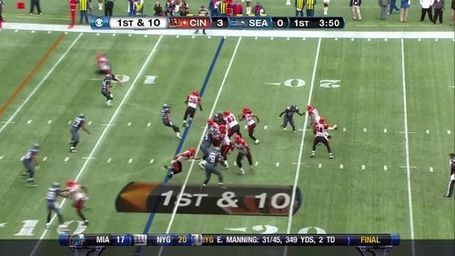 Too late, Dalton is already in his windup. He can already be in his windup because Simpson had a free release, and that allows this play to develop much more quickly than it should. With no under help at all, nothing stops Simpson from making the catch right on the goalline. At that point, I don't see much beyond blatant pass interference that Sherman could have done about it, but the biggest factor in this play is Simpson's free, unhindered route.

1-10-CIN 14 (14:51) A.Dalton pass incomplete short left. Play is not reviewable.
Point 1: Screw you gamebook for noting "play is not reviewable". You guys are total Beenies.
Point 2: This is Dalton's backward-pass-that-was-a-forward-pass. Prior to the snap Green motions from right to left, and this play is designed as a quick outlet pass to Green with several linemen releasing to block for him. 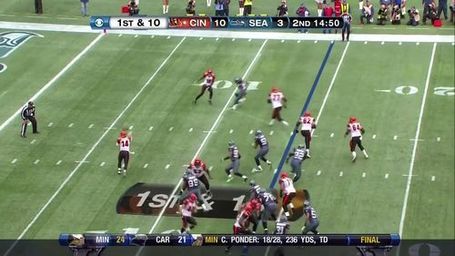 Even if Dalton didn't fumble the ball, it wouldn't have mattered as Sherman was all over Dalton all through the pre-snap and post-snap process.

1-30-CIN 49 (9:38) A.Dalton pass short right to A.Green to SEA 42 for 9 yards.
Let me just note here I was really frustrated with the broadcasting direction during this game. Pre-snap, both WRs are lined up left, with Sherman on Green in the slot. After rolling out right, Dalton throws a 9 yard completion to Green, who is on top of the right sideline, with Sherman about four or five yards in front of him. I would love to know what happened in between. But I don't.
2-6-CIN 35 (3:18) A.Dalton pass incomplete deep right to A.Green. 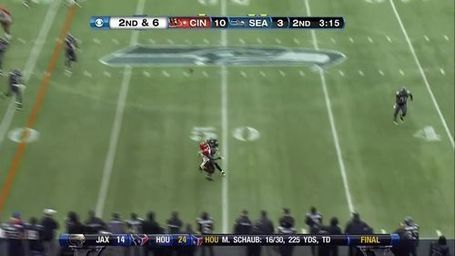 Not a big fan of this one. The coverage is tight, but Sherman never turns his head throughout the play, even when Green is clearly setting up for the catch. There wasn't a catch, because the throw was horrible, but Sherman didn't know that, because he never looked for the ball. Jenningsesque. 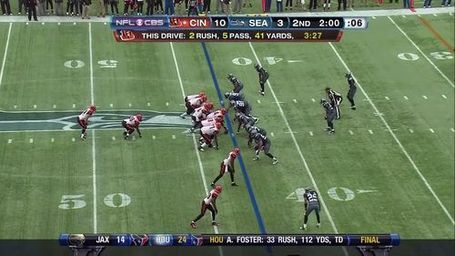 I hate this play by sheer dint of us being in zone (the corner stance is a tell, if you're wondering), and I hate it when we're in zone. Because we're not good at it. I hate it even more when the opposing team lines up two receivers on one cornerback, in this case Sherman. Sherman, as far as I can tell, covers Simpson. Browner doesn't cover anyone, he ineffectually runs after Green, in the slot. 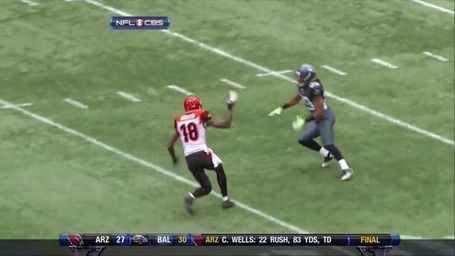 Earl Thomas bites on the little stutter-step here, and that allows Green to get behind him. It's not a pure speed thing, though I'm impressed by Green's speed otherwise, it is in fact mostly a mistake by Earl Thomas. The pass is a pretty one too, right in the basket. I don't like anything about this play. Not a thing. Best we can tell Earl Thomas is to blame because CBS again decided to show no useful camera angle, so I can't really tell what anyone else is doing, particularly Kam Chancellor.

2-4-SEA 43 (5:25) A.Dalton pass incomplete deep right to A.Green [R.Brock].
Sherman is playing with a five yard cushion here, and no one has the underneath on Green. Sherman then positions himself in the wrong place to intercept the ball and also the wrong place to try and break up a catch if the pass was actually good. 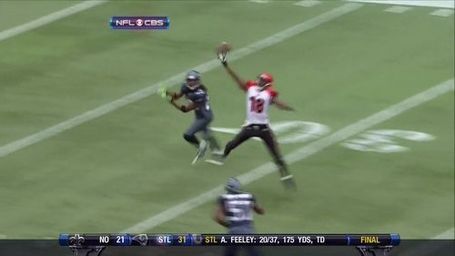 The ball is placed badly because Raheem Brock is about to smack into Andy Dalton. Dalton's pocket presence and feet impressed me, but the pass rush was starting to get to him in the second half, leading to more errant throws. Good to see. 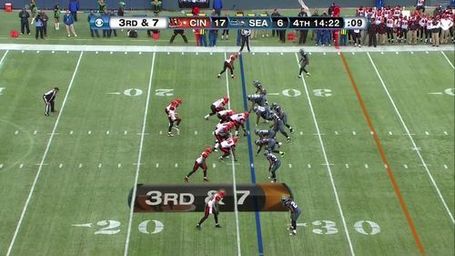 This one's not highlighted due to Sherman, but because it was an interesting play. I call this our "hah, in your face!" formation. Seahawks are in nickel, with the linebackers and Earl Thomas on the line. Right before the snap, David Hawthorne motions out to the offensive right. Snap. The nickelbacker, Roy Lewis, flies at the quarterback unblocked while David Hawthorne drops back to cover his guy, Andre Caldwell. Love the play, but it is sadly the Hawthorne-on-Caldwell matchup where it falls apart, as Hawthorne loses Caldwell on a simple comeback route and Dalton gets the easy and quick completion for the first.