The Seahawks' Doug Baldwin is a Third Down Machine

Share All sharing options for: The Seahawks' Doug Baldwin is a Third Down Machine

Raise your hand if you thought undrafted free agent Doug Baldwin would lead the Seahawks in nearly every receiving category and be their most prolific first-down seizing third-down target through the first 11 games of the season. My hand is not up, and props to anyone with their fist in the air.

Baldwin leads the team in catches (37), yards (604), and YPC (16.3). His fifteen catches over 20 yards are good for T-7th in the league. Only five receivers have 35+ catches and a higher percentage of catches for first down than Baldwin (78.4). If judging by the basic numbers, Baldwin is ballin'. There's more.

The Pro Football Focus "Yards per Route Run" figure "takes into account the number of snaps a player went into a pattern, providing a better indicator of production than Yards per Reception or even Yards per Target." Baldwin is 6th behind Victor Cruz, Jordy Nelson, Wes Welker, Antonio Brown, and the Panthers' Steve Smith. This isn't necessarily a reflection of third down performance, but those five have been game breakers for their teams this season and strong company for Baldwin. The point here is that he is being productive, in general.

However, this post is titled as such for a reason. Baldwin has 19 third down catches (5th), more than 50% of his total catches. 17 of those resulted in a first down, tied for best in the league. His eight first down catches on 3rd and more than 7 are tied at the top. His three catches on less than 3rd and 3 are tied for fifth. And top it all off, he's generating explosive plays on third down, with a 20+ yard catch on third down in seven games.

He's getting the ball on third down and making first downs, in a variety of situations and with different types of plays. Baldwin has seven 3rd down catches for a 1st in the past two weeks, including two of his three catches on less than 3rd and 3 and one on more than 3rd and 7. We'll take a quick look at all three.

On this first play the Seahawks are coming out of the two minute warning, potentially looking to move the ball across midfield and even into scoring position. Seattle is in shotgun with one back and one tight end. Baldwin is circled up top. The man above him is Mike Williams. The lines signify their routes. 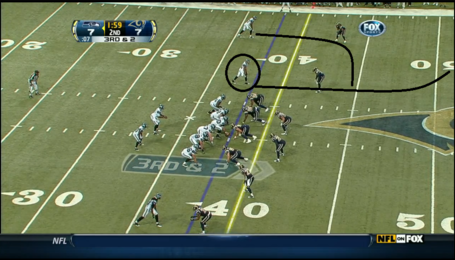 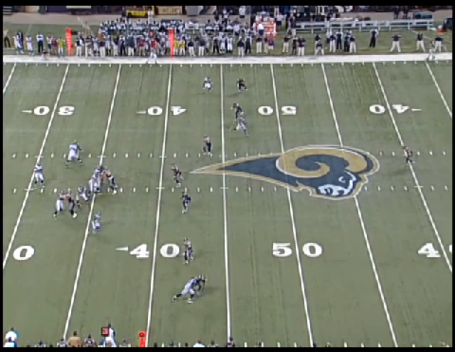 This is a shot from the coaches film. Notice the clean pocket. The Rams drop a defensive tackle into coverage and have one safety deep over the top. Jackson is looking in the direction of Baldwin and Williams, and likely notices that both corners are playing Williams. Baldwin, on the other hand, is in full stride still going out in route... 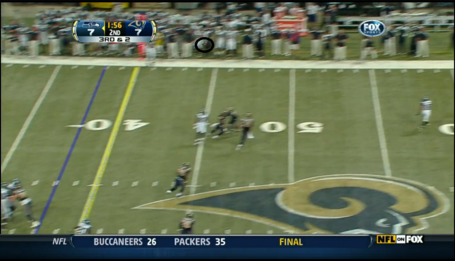 ...And he gets wide open. Both corners lose track of Baldwin on the corner route after being distracted by Williams. Was there confusion with the coverage? Instead of merely trying to get the first and start the hurry up with a completion, the Seahawks go for the big play. 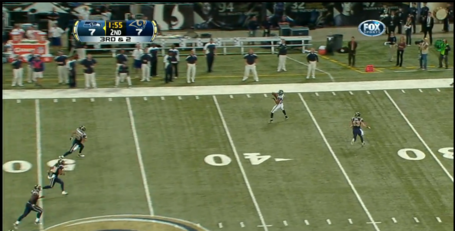 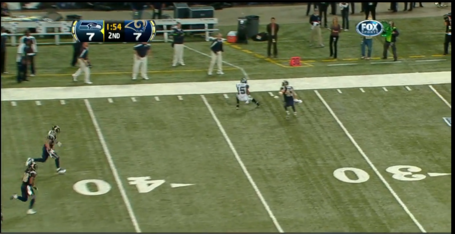 When making the catch, he is aware enough to feel the safety. Baldwin spins and cuts upfield. He'll stop at the 27 and make another series of cuts, evading a handful of defenders and ultimately he ends up another seven yards downfield, between the numbers and the hash (below). About seven or eight screen shots would've been needed to accurately show the whole six or seven yards of zigging and zagging. 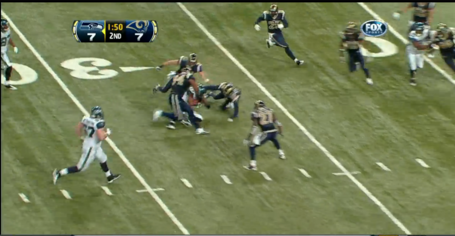 Atleast half of those eight defenders had a chance at Baldwin but couldn't bring him down, a pretty impressive display of short area elusiveness.

Here we see his ability to create separation as both a receiver to get open, and runner after he catches the ball. I also like this example because though it's only 3rd and 2, this is a call the Seahawks could make on third and long if they were looking for the explosive play, or simply willing to take the underneath throw to Williams if it's there (he ran a seven yard route).

Moving on to play 2, which also occurred in the Rams game. This one is on 3rd and 8 early in the third quarter. I'll forewarn you - it's nothing fancy, but it's worth appreciating Baldwin in this capacity. Seattle is backed up in their own territory and needs the first down. In this five wide set they are simply trying to space the field and find the open hole for the completion. Baldwin is circled, with his route. Rice is the top receiver. 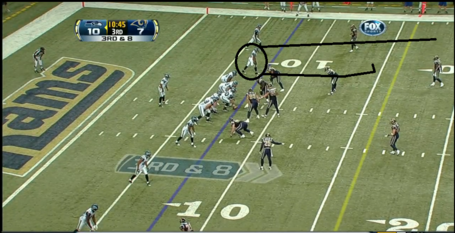 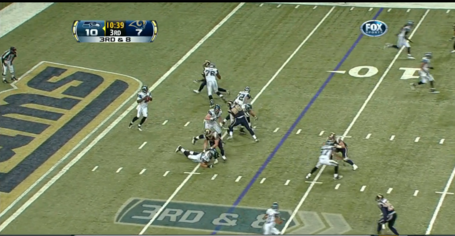 Jackson is only looking left, towards Rice and Baldwin. Baldwin is about to go into his break. His suddenness helps create just enough separation to go into traffic... 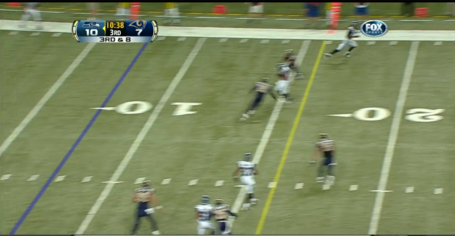 ...and make the catch. The go route by Rice distracts the outside corner and opens just enough room for Baldwin to sneak underneath his defender, who was playing well off at the snap. Maybe he was respecting the deep route, as Baldwin had already burned them? 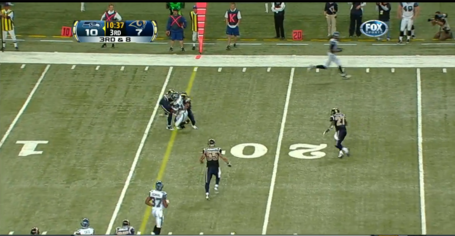 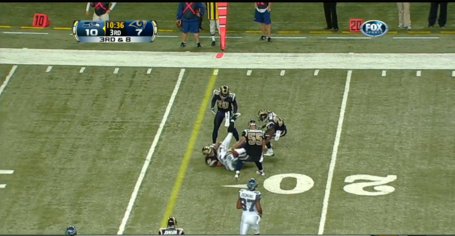 After making the catch, he fights for the first down. Baldwin doin' the dirty work. It's easy to appreciate the big play, but the fact that he's an undersized receiver and is willing to put his body on the line adds to the Dougie-Fresh allure.

This final play is from the Redskins game and is a different type of play. Two similarities to the first play shown; both plays occurred on 3rd and 2 (the NFL gamebook has this play listed as 3rd and 2, not 3rd and 3 like Fox indicated) and are near midfield, but on the Seahawks' side.

However, the difference in game situations I think makes them dissimilar in their nature. The first play is in hurry up mode inside two minutes, and on the second play the Seahawks are simply trying to sustain a drive inside of four minutes. One play is looking to gain a chunk of yards and the other is more geared towards moving the chains before the hurry up is necessary.

Seattle is in one back, one tight end. The line denotes that Baldwin is about to go in motion. In person this particular motion caught my attention, to the point where I stopped talking to my friend mid sentence and stood up to watch. A bit dramatic maybe, but I was intrigued. Anyway, the two defenders are circled because they will move. The "deep" safety is a non factor in the play. 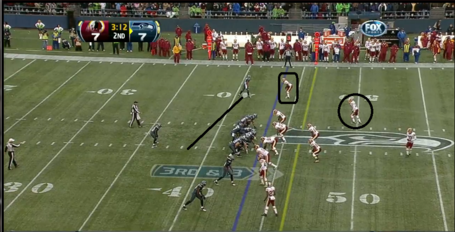 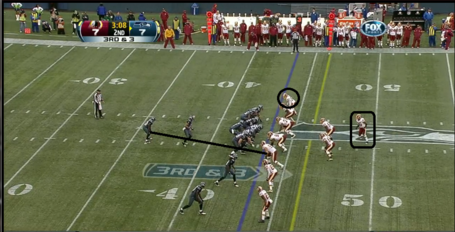 Baldwin is now the "fullback/H-back." The previously circled safety has moved onto the line of scrimmage over the tight end, and the cornerback motions with Baldwin. The defensive advantage of press coverage is taken away by the motion. The line from Justin Forsett to the stand-up rusher signifies Forsett will pick him up in pass pro. 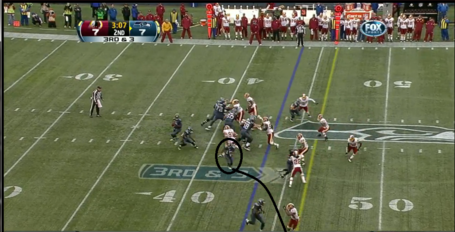 Baldwin is circled. Three players are separating Baldwin and the corner, who is stuck behind the linebackers and corner that is jamming Sidney Rice a couple yards downfield of Baldwin. Baldwin has room to work. 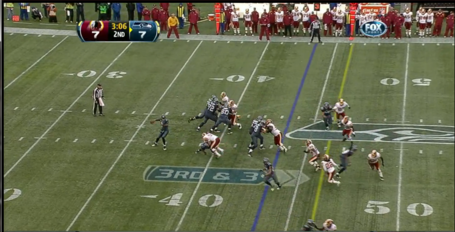 Rice did the trick, setting a "pick." Jackson just has to make a good throw, leading Baldwin towards the sideline marker. 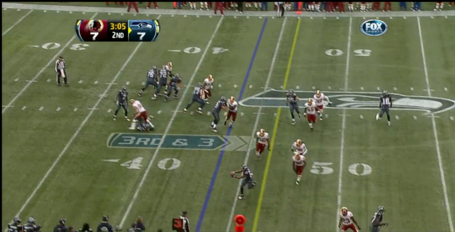 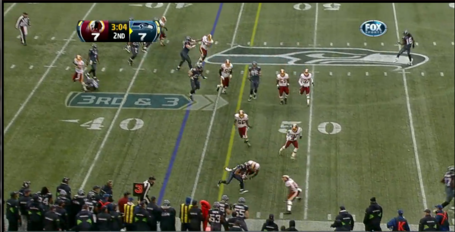 Secure the catch, turn upfield, and get the first, check. 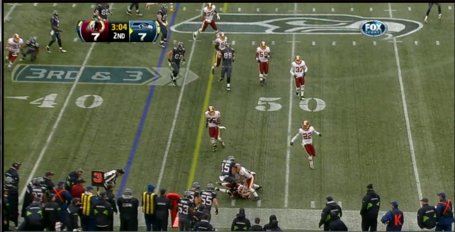 Baldwin sheds the first tackler before being stood up and pushed out of bounds by the second man. His effort and slippery nature create a recipe for breaking tackles and getting yards after the catch - we've seen him do it, to an extent, on all three plays.

If not for Baldwin, the injuries and inconsistency at receiver would have an even greater impact on the offense than they already have. He may not be a primary receiver, but as a complementary player it looks like he can do almost anything that is asked of him. His ability to play both inside and outside is a major factor, not to mention Baldwin's football savvy appears well beyond his years. The fact that he's been clutch on third down is just icing on the cake. So far, we've seen why John Schneider wanted Baldwin so badly. Hopefully this is just the beginning.