The 2-5 Seahawks want to rebound from a 22 point home loss, now heading into the second game of a crucial three-game stretch that could greatly affect their playoff chances. Coming off of a 27 point road defeat, the 3-4 Cowboys are in a similar position. A win gets them to .500, a loss puts them further down the same hole the Seahawks are trying to scrape their way out of.

Seattle's two most recent early kickoff, road games came down to the final minutes, Seattle 1-1 in those games. In one game they started well and finished strong, in the other they did neither. This week I'm hoping Seattle can be aggressive and dictate the tempo early, as the Cowboys will try to take advantage of being at home.

Earlier in the week I appreciated the potential return of Tarvaris Jackson, so I won't belabor the point. We know he's currently a better option than Charlie Whitehurst. Hopefully the gametime decision on Sunday yields a Jackson start and some early offense.

Jackson knows what he must do to right the ship; get some wins. This week Pete Carroll praised Jackson as a potential quarterback of the future, and then Jackson gave himself an "F" for his performance thus far. I love Jackson's harsh-honesty here.

Despite a couple of career-best passing performances in 2011 for Jackson, the team is 2-5 and he hasn't started two games. He knows that his job is to lead the team to wins, and he wants to be judged by wins and losses. He doesn't sound like a quarterback that is giving up any time soon. If Jackson is close to 100%, I think he plays.

Tony Romo's quarterbacking - the "Romocoaster" - can be unpredictable. He's a savvy quarterback with a knack for the big play, but he's also prone to the boneheaded mistake.   Regardless of Romo's physical performance on any given Sunday, he is very capable reading defenses and has a gunslingers mentality.  When he's on, he causes problems.

Carroll said Romo is "going to work us at the line of scrimmage, so we'll have to do a good job with our looks and disguises." Romo can be dangerous when the play breaks down and he gets outside the pocket, but he happens to be struggling against the blitz this season. He is completing 66.7% of his passes with a 98.1 QB rating when not blitzed, compared to 52.2% and a 68.6 rating when he is blitzed.  Seattle will need to bring pressure, but also keep him contained. Romo is very slippery on the move, but also can let the ball slip away. It's a gift and a curse.

Though Andy Dalton's longest run in Week 8 was three yards, opposing quarterbacks have found scrambling lanes easily against Seattle.  Given that Seattle needs to both bring pressure and find a way to keep Romo from using his legs to get first downs, here's a blitz from Week 8 that Seattle could use this weekend. 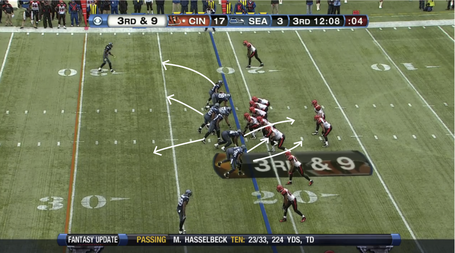 Here Seattle has eight men on the line on 3rd and long.  The arrows show where everyone will go post snap: Roy Lewis, Chris Clemons and Anthony Hargrove bring pressure from the bottom hash and Raheem Brock pressures from the top. 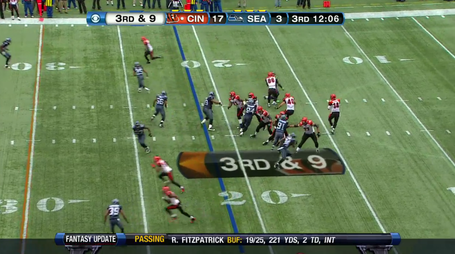 Here we see the play in action. Notice how Alan Branch is simply hovering around the line of scrimmage and not pursuing towards Dalton. Hill drops behind Branch, while Hawthorne drops deep with the slot receiver.

Branch stays hovering around the line spying Dalton, either waiting for a scramble or ready to get his hands up in the passing lane. Hill's responsibility appears to be the area behind Branch. Seattle got home with the four man pressure, but also protected against Dalton finding a lane to run or throw down the middle.

Branch is abnormally mobile for his size (6'6", 330), well suited to play the spy/disrupter role. Branch is questionable for the game, thus throwing a monkey wrench into the equation. Seattle has used Red Bryant in short zone or around the line as a spy this season, so he could be an option. Given Romo's mobility Seattle must get creative this weekend, especially if they are without Branch.

Will Seattle continue to experiment with the defensive front seven?

Seattle's defense lined up in a 6-1 or 3-4 formation on a couple of occasions last week - I have seen the 3-4 previously - showing another layer to the defensive playbook.  These two formations were used on early downs, primarily when the opponent had more than 9 yards to go. 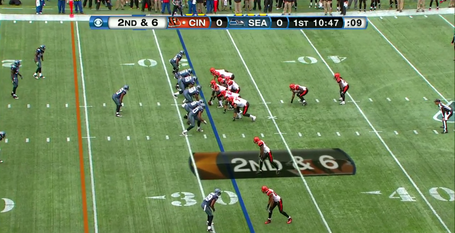 This happens to be one of the few plays when Cincinnati had less than nine yards to go and Seattle used this formation. From top to bottom: Hill, Clemons, Branch, McDonald, Bryant and Wright on the line. Hawthorne is solo in the middle.

The Seahawks get good penetration off the snap and Kam Chancellor comes up from the secondary (currently standing at the top 21 yard line), as Richard Sherman drops behind him into coverage. Scott takes the handoff outside left and picks through Seattle defenders, who are pursuing hard down the line of scrimmage. Scott gained one and Wright was credited with the tackle. The fact that Scott got one on the play is mildly impressive.

Seattle was in a similar formation on the 1st and 15 play that yielded the 43 yard Andy Dalton touchdown pass, proving it wasn't always successful. I'm curious to see if this was installed to counter the Bengals' offense and Bernard Scott's running style, or if this is something we'll see more of going forward. 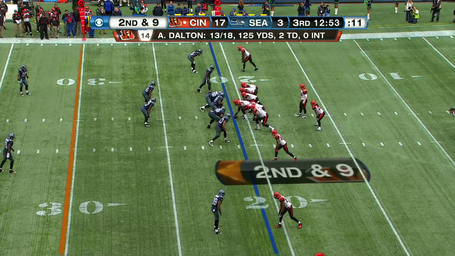 The use of the 3-4 had a pattern. I don't think Seattle used the formation more than a handful of times, but they usually ran it on 2nd and long.  The play above is on 2nd and 9. Clemons is standing up off tackle on the top, Wright standing on the bottom. The down-linemen top to bottom: Branch, Mebane, Bryant (McDonald was used in place of Mebane on another play). The picture below shows post snap; the Seahawks front three gets a good push and eight drop. 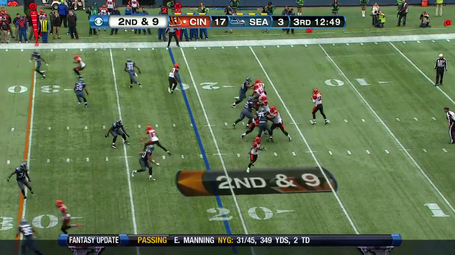 Dalton eventually dumps the ball to Scott just outside the bottom 20 and Chancellor (currently on the bottom 30 and facing us) comes up to make the play. The key here was they generated pressure with just three guys and the zone forced Dalton to check it down. On another occasion the Bengals ran a reverse when Seattle was in the 3-4, but Chris Clemons defended the edge well.

I personally would like to see this as a normal wrinkle in the game plan because of the length and versatility in Seattle's front seven personnel. Given their success last week, I wouldn't be surprised if Seattle used more 3-4 this week to disguise their plays.

Here we are, the halfway point. Part 2 will cover shorter thoughts pertaining to Week 9, playcalling and more. Check back in the morning!