--Miles Austin and Dez Bryant are a challenging duo for the Seahawks' corners. Bryant's beastliness against Richard Sherman and Austin's route running/ability to draw flags on Brandon Browner are two things I'm watching. Seattle needs to account for Laurent Robinson, too. How does Sherman back up a great first start? Can Seattle's secondary hold up?

--When I think of defensive coordinator Rob Ryan: versatile, unpredictable and aggressive come to mind. I'm no expert on their scheme, but I liked his defense in Cleveland and I know he moves Demarcus Ware and others around often. Similar to the other Ryan, they create confusion with amoeba like formations.  Rob also seems to have that Ryan honesty, taking accountability for his defense getting beat badly by Philadelphia. I'm not happy we're facing this defense this weekend, as Rob is now re-focused  on stopping the run as well. The scheme could be one of Dallas' best weapons and Seattle must be prepared.

--Dallas' inside linebacker Sean Lee is doubtful for the game, and that's potentially a major loss. His five passes defended and three interceptions to this point are impressive. He's also second on the team with 22 stops. Can Seattle attack with short and intermediate routes over the middle? Also, Dallas is without cornerback Mike Jenkins. Veteran Frank Walker could be an interesting player to watch.

--Carroll said the reason we haven't seen Leon Washington more on offense is because they haven't gotten enough first downs. He's shown a good burst and the defense notices when he goes in motion. At this point, I hope he simply gets more involved.

--Demarcus Ware has 12 sacks on the year. Good luck James Carpenter and Russell Okung. Also, Seattle needs to make sure they roll Jackson away from Ware. No gift-wrapped sacks.

--The Cowboys also have Jason Witten, one of the league's most complete tight ends. He may be Romo's favorite target. The Seahawks need to keep an eye or four on him, period.

--Seattle had 11 penalties last week and they are in the top five in flags drawn. No surprise there. This has been one of the most telltale signs of this team's youth. Hopefully time remedies this problem.

--The special teams meltdown last week I think was building throughout the game. Jon Ryan may have out kicked the coverage on Adam Jones' long return and Brandon Tate returned a kick 45 yards on the opportunity before the punt return touchdown. This is the second time the Seahawks allowed a return touchdown in the 57th minute of the game, and ultimately went on to allow another return touchdown. This is a painful way lose. I think it will ultimately build character for this team, but a strong special teams performance this week would be a nice rebound.

--The Seahawks successfully used play action and mixed formations on 2nd and long during a two drive stretch in the Cincinnati game. Can they use formations/play concepts on more than just a few drives to keep the Dallas defense off balance?

--Demarco Murray has carried 58 times for 400 yards, with only 20 rushes for 97 yards left of center. Of those 20, 8 have come outside tackle for 66 yards. What I'm getting at is that Murray has struggled running inside on the left. Furthermore, he has gained most of his yards on the right side and right guard Kyle Kosier is questionable. Can Seattle shut down the inside, right side running game and force Murray to gain yards elsewhere? Or not at all?

--The Seahawks will focus on creating offensive balance, which has been an issue because Seattle holds the ball less than any team in the league. Jackson understands the offense needs to stay on schedule and put themselves in third down situations where they can run or pass. If Seattle can't find balance and get themselves into favorable downs and distances, the Cowboys' pass rush can pin their ears back and go after Jackson.

A play to stay ahead of the sticks

Last week the Seahawks used a quick screen to Sidney Rice to gain a few first downs, and Zach Miller was a key component in those plays. If Seattle plans to stay ahead of the sticks this week, they may hope for similar success with this play. Here is one successful attempt from Week 8. 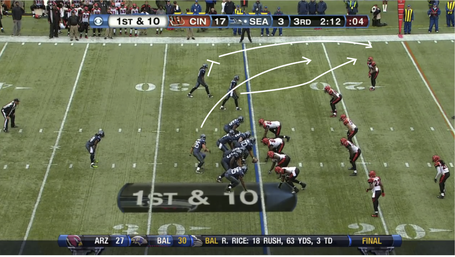 Seattle is in ‘12' personnel. Zach Miller originally lined up on the top of the line, then came down in motion before turning back towards the two receivers as you see now. As the lines show, Miller will release off the snap to help Ben Obomanu block downfield for Sidney Rice.

Post snap Jackson throws to Rice. Note the solid blocking by the offensive line, and both outside blockers getting downfield.

See Sid catch. Note Miller leading the way for Rice and Obomanu out in front finding the cornerback.

Note the double team by Miller and Obomanu to seal the crease. Also, see Sid run.

See Sid get the first down. After the Cleveland game I said that I wasn't a huge fan of Rice on a quick screen, alone in space. Against Cincinnati, the Seahawks used Miller as a lead blocker in front of Rice and it paid dividends. I really liked this play in particular because of Miller's motion before the snap.

Though Miller's numbers haven't been as strong as expected, his importance in other aspects of the game must be acknowledged. I'm hoping Seattle can find more ways to get the ball to their playmakers in space, with Miller out in front.

Heading into the past two games, I've hoped/semi-expected this team could deliver a W. I'm hoping the team can go to Dallas and re-learn the feeling of being in the game for a full 60 minutes, instead of falling behind early, lacking balance and facing tough decisions that become magnified because of the situation.

Pete Carroll spent part of the week addressing questions about juggling the pains of rebuilding and not winning; there is no doubt this organization knows the importance of this game, as this week Carroll himself acknowledged the team's preseason goal of winning the division. They don't want to keep losing.

I want to see what happens when this team doesn't hand the other team the game through untimely penalties, big plays or third down conversions. Seattle still hasn't held the ball longer than their opponent.

There is a lot of room for improvement, but one thing Seattle already has going for them is they play hard. They've won on the road before, and they could go into Dallas believing it's possible. Regardless of the result, hopefully they hang tough for the whole game.