Game Ball of the Week: Four Quarters of Beef'Moe

Share All sharing options for: Game Ball of the Week: Four Quarters of Beef'Moe

The Seahawks did something this past Sunday that might have flown under the radar a bit - and I'm going to piggy back on Krazyleggs' post from yesterday about patience and consistency and confidence in your systems - they stuck to the run. They committed to it.

Hawkblogger almost had an aneurysm when the Hawks ran the ball four times in a row in the second half. Some of us, including me, might have been a little annoyed when they were running it in the fourth quarter, trying to come back. They're wasting the clock! They're not in hurry up! Well, they scored a touchdown though, I guess.

I don't know if this was it or not, if this was what was going on, but I remember Davis Hsu tweeting during that 4th quarter drive - a drive that went ten plays (six of them runs) and 70 yards - and he struck a chord with me:

Rage against the machine.

"I agree with the amount of running in that drive despite being down - more about establishing some success and identity on O - not the win. Seahawks have to build the confidence of the OL, Lynch and to a certain degree BMW on that drive."

Pete Carroll said after the game that the Seahawks saw something in Dallas' defense that they wanted to exploit and that they really wanted to run on a good Cowboys' run D. The did.

Davis said after the game, "Seattle 30 rushes, 30 passes, 18 first downs, and get this - won Time of Possession - 30:30ish. Rare. This is a game where Tom Cable put the kabash some on the no huddle - the O-line had some penalties but opened up holes and gave up few sacks.

I love Davis' musings - and I don't know if he's wrong or right, but one thing is true about this game - the Seahawks stubbornly stuck with the run despite being down. As Davis said, 30 rushes, 30 passes and won the time of possession. They ran the ball 16 times in the first half and 14 times in the second. They ran for 72 yards in the first half and 87 in the second.

As Krazy put it yesterday, "The offense is trying to grow and learn, but the offensive gameplans aren't drastically different from each other, and the play calls are good but designed to play to our talents and keep hammering them home."

"Look at the running game, they aren't trying to do all kinds of different things, there are about seven base runs they are trying to get this line to learn. If they become good at some, who knows, they may call more different kinds, but improvement before expansion is a good idea. It'll be tough to watch, but I imagine a day soon, were this line can learn those seven runs and run them with their eyes closed and hog tied."

He pointed out something Pete Carroll took away from Bill Walsh's philosophy in coaching: "Bill talked a lot about getting your formula down as a team. Once you've identified your formula - which will be unique to only your team - that is when you can win consistently."

Pete Carroll wants balance for the Seahawks offense. He wants to be able to run the ball. I think Davis is probably right that the fourth quarter drive was more about establishing identity and imposing your will than it was about pulling out all the stops to try and get the comeback win. The playoffs are out of the picture, really. That didn't change on Sunday, and wouldn't have had the Seahawks won. That's not to say the Seahawks don't want to win, or try to win, but as Krazy pointed out, it's probably more important that the Seahawks establish 'their own way' of playing rather than using a mad-dash, trickeration-heavy, or desperation style of gameplan to get themselves back into games.

"Really, Tom Cable made an issue of it last week that we needed to take this step (and run the football)," said Pete Carroll post-game. "We had talked about it as a staff. We needed to make a step ahead. We were not moving ahead with what was going on as a running game. He addressed them perfectly, they responded perfectly, they did exactly what he wanted them to do, and we made a big jump for us."

We've talked about it here a lot but this season now, moving forward, becomes about forming that identity and perfecting those bread and butter plays. I had thought that the Seahawks' best chance for offensive success was to build the run game by passing well but I suppose I could be wrong. There are many ways to skin a cat. Which is a really gross idiom.

I went through the game and took note that Marshawn Lynch broke off at least one big run in each of the four quarters on his way to rushing for 135 yards and a touchdown. Consistency. He averaged 5.9 yards per carry and that is why he gets this weeks coveted Game Ball. I know Lynch was disappointed that the Seahawks lost and that frustration was apparent on his face the entire game, but I have to think that some of these runs were cathartic for a Seahawks offense that hasn't been able to run the ball at all these past few seasons.

Said Cowboys linebacker Bradie James after the game on Marshawn Beef'moe Lynch, "He's good, man. I think he is one of the most underrated players in the league when it comes running the ball cuz we were on him. They do a good job of scheme running."

Let's take a look at some of his runs, for shitzengiggles if nothing else.

The Seahawks in 1st-and-10 on their own 20 after Dallas kicker David Buehler blasted one out of the back of the endzone following a Cowboys field goal to go up 3-0. I've given the blocking assignments below - Russell Okung, Robert Gallery, and Max Unger are going to reach blog with outside leverage and Zach Miller is going to work on Demarcus Ware to create a hole through the C-gap (outside shoulder of left tackle Russell Okung). FB Michael Robinson is going to help on this, immensely. 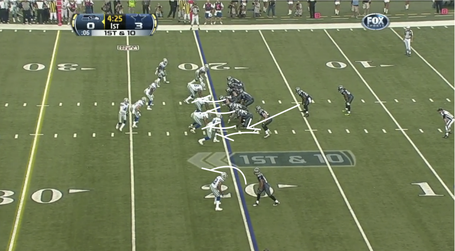 Above, you can see that Okung and Gallery do a good job of getting the leverage and opening up a lane. Michael Robinson is going to seal off Ware as he leads the way for Lynch, who will now be matched up one on one with the safety, Terence Newman, coming in to clean up the gap.

Lynch wins that one and drags Newman, by my estimation, about 7 yards before going down at the 29 yard line. Beef'moe baby.

On to the 2nd Quarter:

Seahawks in a 2nd and 3 from their own 13 yard line, 5:49 left in the half. The Seahawks are going to run an inside zone play - similar to this run I broke down a few weeks ago.

Essentially, Max Unger is going to block the nose tackle, with the quick help of John Moffitt to his right. Once Moffitt knows that the tackle is taken care of, he'll move along to whatever is closest and/or most threatening, and in this case it's the safety creeping up to the right top of your screen, who James Carpenter is going to pull and engage as well.

Zach Miller, who is motioning to the left in the shot below, is going to pull back to the right and cut block the menacing defensive end there, currently mostly hidden by Carp. 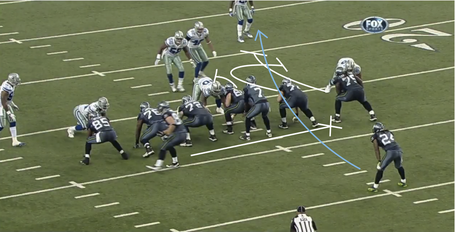 You can see above that Zach Miller has done a good job of effectively taking the defensive end out of the play - his cut block will occupy him long enough for Lynch to get by. Ahead of Lynch, Carpenter is in the second level engaging the safety... kind of, and Moffitt is now moving on from the NT that Max Unger is handling aptly. 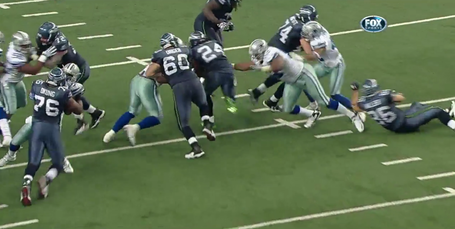 Moffitt crack-back blocks, more or less, on the safety and as you can see above, the defensive end misses Lynch as he runs past. Once through the line, because Robert Gallery has done such a nice job of releasing downfield and making his block (see above, top left), it's nothing but green pastures in front of Beef Moe. He picks up 19 yards on the play before being corralled by Gerald Sensabaugh.

14:22 on the clock. Seahawks at their own 10-yard line in a 2nd and 6 situation. The Hawks are going to run a counter play where all the down linemen, save for Russell Okung at the left tackle, are going to down block to the right, drawing the defense that way.

(A lot of safeties and linebackers watch the guards for first indication of where the offense is going - if the guards block downfield, it's a run, and the safeties' first instinct is to go towards where the guards are blocking. If it's a pass, the guards will be in pass pro blocking and the safeties/linebackers will adjust accordingly. That's the simplified version, obviously, but generally speaking that's where it starts).

In this case, Gallery, Unger, Moffitt, Carpenter and McCoy all down block to their right (and in the second photo you'll see linebackers and safeties gravitating to that side like moths to a light). Miller is going to pull again - something in which he's been really effective, and seal the running lane against DeMarcus Ware. Ball is snapped. 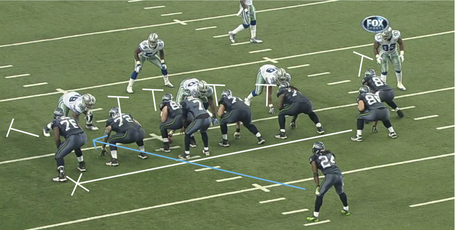 Above you can see where the linebackers and safeties have anticipated a run - to the offensive right. Lynch takes the handoff and goes left through the B gap, and in this case Robert Gallery has done his job. Russell Okung has slipped up a bit with Ware but Miller is going to clean it up.

Said Carroll, on neutralizing Ware, "We picked him up with the tight end, we motioned the tight end to block him, we used the backs, we slid in ways that would give us an advantage on him."

Lynch hits the hole hard and rumbles forward for a pickup of 16 yards. (Below, you can see Lynch rushing through the hole with a bunch of green in front of him).

Nearly the same play, but this time Gallery is going to pull and take on the linebacker, and Unger is going to reach block the d-tackle to his left. Okung is going to mind Ware. Ball is snapped. 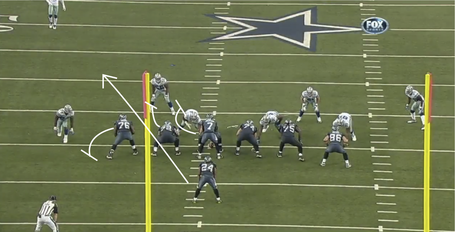 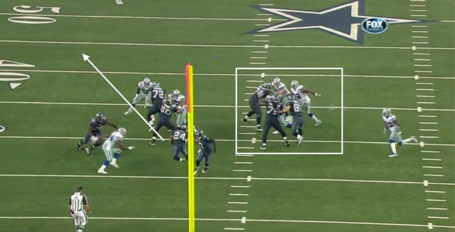 As you can see above, Unger does just enough to get in the way, as does Gallery. I'd say that with a good running back, this is really all you have to do, and Lynch (whether you believe him to be good or not) takes advantage. Meanwihile on the inside, Moffitt has done a great job of getting in the way of the backside defenders.

Ben Obomanu does a good job of occupying the corner - he doesn't actually block him but basically forces him to attempt an arm tackle. Which doesn't work. 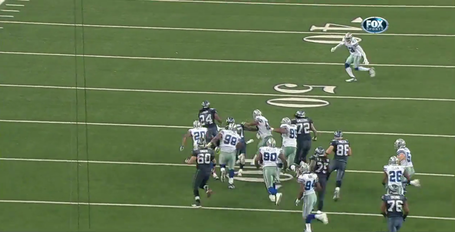 Next week, however, will be a very difficult test for the Seahawks. Let's see if they can manage any consistency in running the football.