Name Your Top Defensive Play in the Seahawks Loss to Washington

Share All sharing options for: Name Your Top Defensive Play in the Seahawks Loss to Washington

Before we put last Sunday to rest and focus on tonight's game - which we will do today, in this weird, short week - I wanted to talk a little bit about a few key plays made against Washington.

The Seahawks' defense didn't play the way it was capable this past Sunday and on the way gave up 23 points to the Washington Redskins. They made some mistakes and the Redskins took advantage, but that doesn't mean there weren't some highlight worthy individual plays to focus on.

This is why it's nice to have 6'4 cornerbacks that used to play receiver. Brandon Browner does a good job of anticipating the pass Rex Grossman sailed toward Jabbar Gaffney, and picking it off at its high point. The pass is a poor one but Browner showed good instincts by blanketing Gaffney in his route. It was a big play at the time, as the Seahawks trailed 7-0 early 2nd quarter.

Even more important was the very next play was a 20-yard Marshawn Lynch touchdown on a swing screen pass. 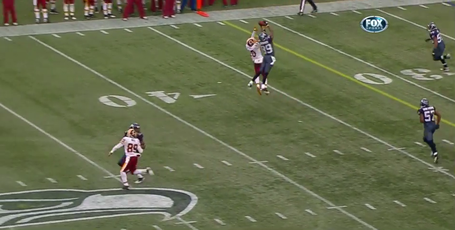 Red Bryant just bowls over Redskins G/C Will Montgomery. This is, purely and simply, physical domination. I need no more words to describe this, I just have to show you this picture.

I'm loath to call this a good defensive play - it's really more of just an awful throw by Rex Grossman but the fact that Richard Sherman was in position to make the play is worth pointing out. The Redskins send two deep here, a play after a missed field goal attempt by Steven Haucshka left the score knotted at 7; the left wing receiver, Armstrong, runs a deep corner route and Santana Moss runs a post.

Rex Grossman says f*ck it and chucks the ball, but severely underthrows it into triple coverage. At least Rich Sherman catches it right? (Red arrow points to ball. Circle points to intended receiver).

This play immediately follows another brilliant defensive play by Brandon Browner where he broke up a pass intended for Dante Stallworth. The Redskins are now faced with a 3rd and 6 with 8:08 in the 3rd quarter - the score still tied. Washington is trying to mount a drive and get out of their own end as they line up at the 34, but Anthony Hargrove foils their plans.

I like this play because really it was all about effort. The Hawks run a safety blitz with Earl Thomas despite the Redskins' protection package of twin running backs on each side of Grossman. Those players vacate the pocket and Hargrove just straight up beats LG Maurice Hurt to the quarterback. See below:

The Anthony Armstrong TD put the Redskins up 20-17.

This play might seem rather inconsequential as it comes immediately after the Redskins have managed to re-take the lead late in the fourth quarter after being down by ten earlier, but this blocked point after attempt is actually perhaps the biggest defensive play of the game.

With 6:26 left in the game, taking into account how well (read, awful) the Seahawks offense had been moving down the field, keeping the Redskins lead to three here could have proven to be a big difference. Now, obviously, it didn't work out in the end for the Seahawks as they were unable to mount any kind of offensive charge, but at the time, it was a big-time play.

Red Bryant, instead of bowling over Redskins G/C Will Montgomery as he did earlier in the game, used his uncommon quickness to get by him laterally and through the A-Gap, see below. Brilliant play by Bryant. Again.