When I think of the Eagles offense one of the first plays that comes to mind is the screen. Michael Vick and Jeremy Maclin are out for this game, and LeSean McCoy is questionable. This is not the Eagles offense, but this is not a group to take lightly, either. On a short week and without all of their weapons, the coaching staff must gameplan creatively to beat the Seahawks.

Now, by no means am I an expert on the Eagles' screen game. But as a football fan, this particular offense has always intrigued me. They can be so dangerous creating explosive plays with misdirection or well-timed patience; personally I think one of the more difficult team specific, offensive sub packages in the NFL to stop when clicking on all cylinders. They are currently tied with the Bills as the league's best screen blocking team according to Pro Football Focus. The Eagles may not be having the year they hoped for, but they are still prolific running the screen.

My impression of the Seahawks' performance against the screen is that they are OK, at the least they are better than last year - that's not saying much. Last week the Redskins used the screen early and often - the first offensive play of the game was a screen. They had decent success, notably mixing the screen game in on their two touchdown drives.

For the Seahawks to win, they can't allow the Eagles to get into a rhythm and dig into the screen playbook. Let's take a look at a few recent examples of Seattle against the screen.

The first example is from Week 8 against Cincinnati on 3rd and 11. But before we get to the play, it's worth mentioning what happened on 1st and 10. The Bengals ran a double screen concept from the shotgun; they faked the run left, came back to the right to fake the wide receiver screen, only to come back to the running back on the left with the screen.

The defense, in a 3-4 with Kam Chancellor as the sixth man on the line, didn't bite. The three down linemen didn't rush up field because of the wide receiver screen fake. Ultimately, the Bengals got -1 yards on a play that could have been even worse.

On 3rd and 11 the Bengals tried again, but with a different play. Seattle is in 'Bandit' versus the four receiver, shotgun set. Tight end Donald Lee is circled, as he will get the ball. 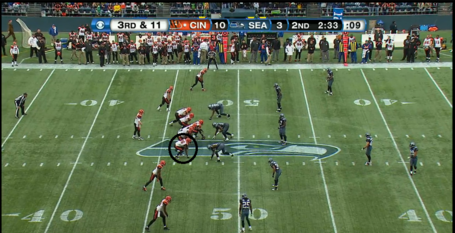 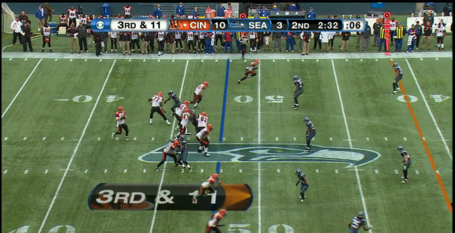 The offensive line and Lee start pass blocking, while the defense drops into coverage with a three man rush. 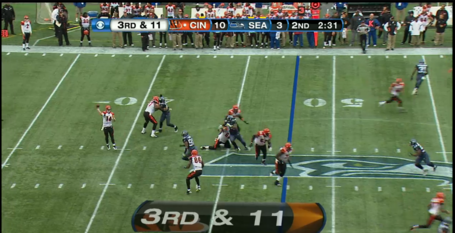 Lee lets his man go and here come two offensive lineman out in front. David Hawthorne recognizes the play; he is on the Seahawks logo and charging towards the ball. 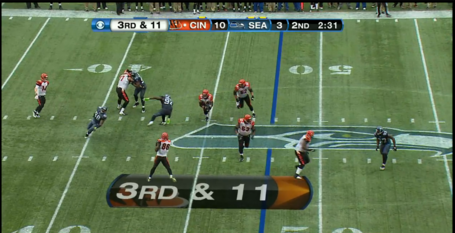 Lee catches and is about to turn upfield. The lineman out in front targets Hawthorne, while 63 will come in and lead the way for Lee. 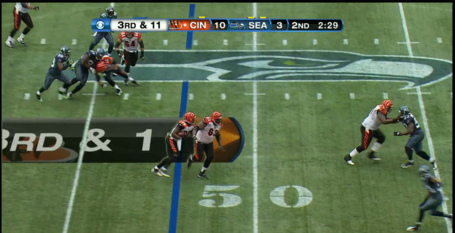 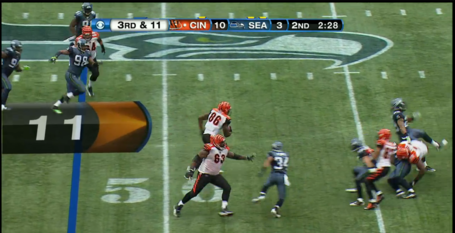 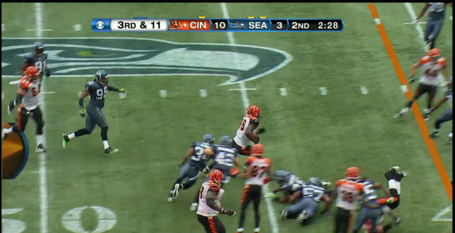 ...but Lee gets around Roy Lewis anyway, and also Chris Maragos. The first down is well in sight. 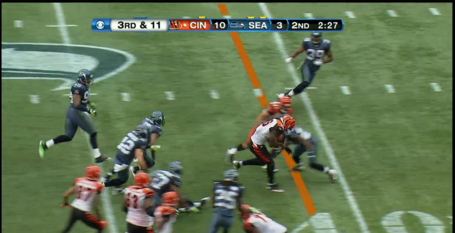 Lee falls forward for the 1st and the Bengals score two plays later, after the two minute warning.

I commend the Bengals for sticking with the screen after it didn't work on 1st down, throwing the curveball with the tight end screen. Even though the Seahawks pursued closely on the play, the Bengals offensive line did a solid enough job creating a lane and the tackling could have been better.

When researching for tonight's game, I came across this article that highlights an Eagles touchdown drive earlier in the season. The drive ends with a 3rd and goal, tight end screen to Brent Celek for the touchdown. Thus, my fear is the Eagles could get creative with two screens in three plays or use Celek in other ways, perhaps trying to take a page out of the Bengals' playbook. Just something to watch tonight.

Let's move on to last week's game. The Redskins went screen heavy against Seattle, running at least a handful of them, if not more. They did use different formations to disguise the play, but I noticed something that I'm wondering if the Eagles will pick up on.

In the following screen shots, play one will be on top, play two below. Play one is on 1st and 15 for 14 yards, play two is on 2nd and 6 for 11 yards. The point here, however, is to look at what happens pre-snap. 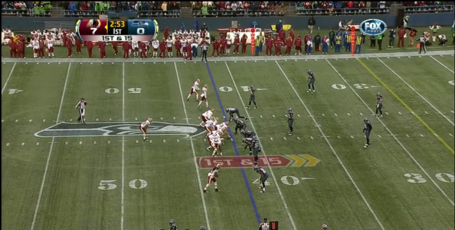 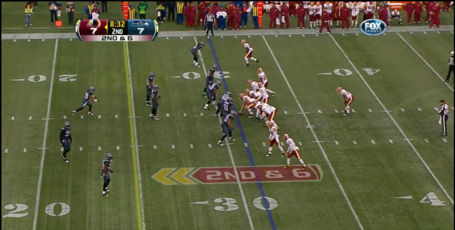 In both pictures the Redskins are in one back, one tight end. On top the Seahawks have four linemen and five defensive backs, on bottom they are in a 3-4. Now watch the motion. 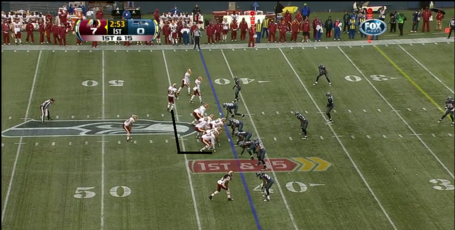 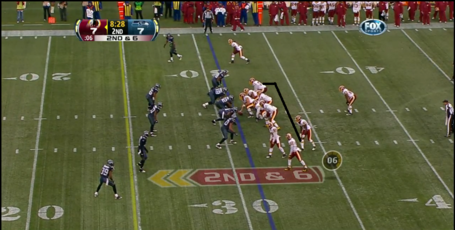 Tight end Fred Davis has moved off the line and across the formation in both pictures. The defense makes minor adjustments both times, following Davis. Thus far, these two plays look very similar. 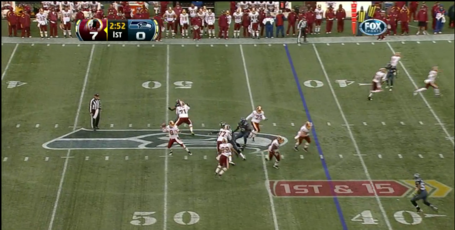 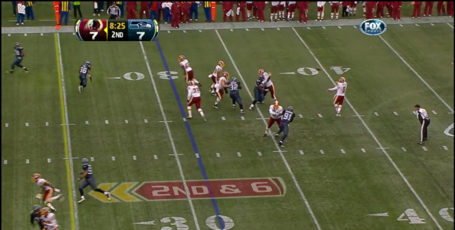 In fact, they are nearly identical. Both are screens run to the opposite side of the trips bunch, which is in essence a decoy for the actual play. Furthermore, Seattle was unable to stop either play for a minimal gain. I'm curious to see if the Eagles pick up on this in film study and implement something similar into the game plan. If they do, how do the Seahawks counter?

This final play is a pretty basic screen, and is intended to simply show a little more of what happened last week. Seattle is in a 3-4 versus a one back, one tight end set. One observation; Seattle has been in the 3-4 on three of the five plays I've mentioned. 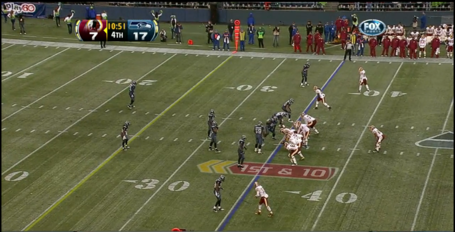 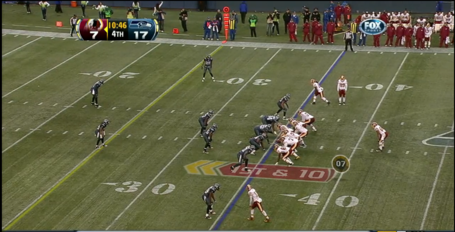 This time the motion is by the receiver, initially lined up out wide on top of the screen and now facing the quarterback, standing behind the inside receiver. 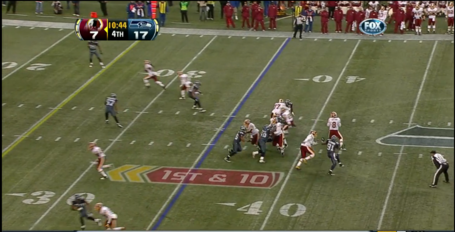 The Seahawks bring five, Hill and Clemons the two stand up rushers. K.J wright drops back off the line (now standing on the 33). 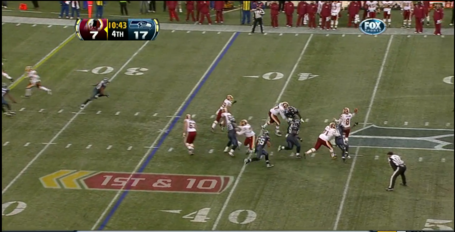 Clemons almost gets home, but not before Grossman can dump to Helu. K.J Wright sees the whole thing develop. He will slip and re-gain his footing before the pursuit. 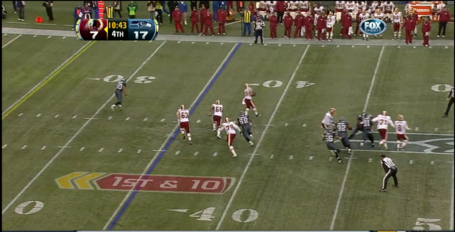 Wright has a path to Helu. Clinton McDonald has broken from the rush and is barreling downfield to help out. 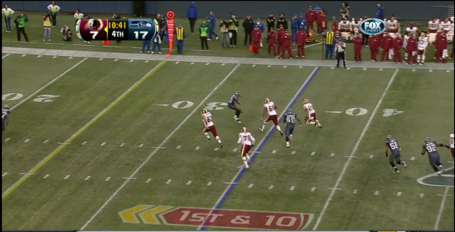 Here the Seahawks have managed to make it 2 on 2; the lineman versus Wright and McDonald trailing Helu in pursuit. Two of the linemen are not helping the play, and the Seahawks are in position to stop the play. It's up to Wright to shed his man and McDonald to slow down Helu. 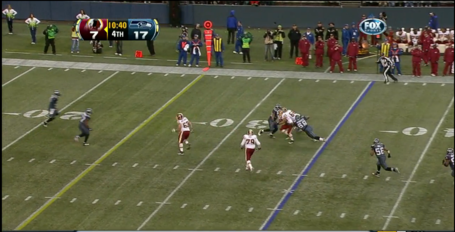 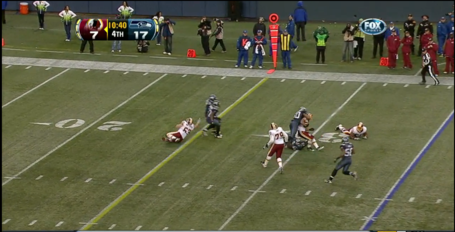 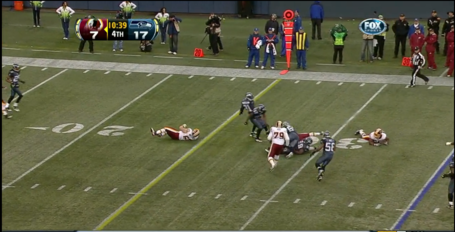 Momentum gets Helu a few extra yards, but overall a solid job by the two Seahawks for seeing the play, giving a strong effort and minimizing the damage. If Helu breaks the tackle or Wright can't shed the blocker, this play could go for a bigger gain. LeSean McCoy is a big play threat every time he touches the ball. If he plays, the Seahawks need to tackle well and get him to the ground.