Share All sharing options for: Thoughts About Seattle's Pass Defense

Seattle's defense has quickly become one of the more welcome surprises of this 2011 campaign. I will grant that they haven't exactly faced a line of elite QBs--particularly recently, which likely has a lot to do with the spike in defensive performance.

However, neither have the Texans, and no one is doubting the legitimacy of their seriously elite pass D. No, stop, have you actually looked at the numbers there? It's absurd how good they are against the pass. You want traditional stats? They're allowing a 60.7 QB rating against, and giving up 183.4 yards per game. You want better traditional stats? They're allowing a 49.8 completion percentage against and 5.4 yards per attempt.

Ok, still not convinced, and want better, not-traditional stats? According to DVOA, they rank 3rd in the league in pass defense, at -11.7% (behind the Jets and the Ravens)--which means the passing attack of an opposing team is performing 11.7% worse against the Texans than against the "average" pass defense.

And one of the most eye-popping stats, whether you put much stock in it or not: they are allowing a ridiculous 3.8 ANY/A (adjusted net yards per attempt). To give that some context, Blaine Gabbert's ANY/A this year is 3.7. This Texans pass defense is stiflingly dominant. I think this year's MVP award may need to go to Wade Phillips (kidding... sorta).

Alright, so I got a little carried away there, but after looking at those impressive numbers, consider this list of QBs: Kerry Collins, Chad Henne, Drew Brees, Ben Roethlisberger, Jason Campbell, Joe Flacco, Matt Hasselbeck, Blaine Gabbert, Colt McCoy, Josh Freeman, Blaine Gabbert, Matt Ryan. Not an incredibly impressive list. Definitely a couple semi-elite to elite passers there, but a whole lot of terrible passers as well.

That's a list of the starting QBs the Texans have faced this year. Yet, does anyone think this should take away from their status as a legitimately elite pass defense? Of course not, because each of these guys is still a starting QB in the National Football League, which means each of them is among the top 50 to 75 most talented passers in the world.

Succeeding in any sport is about winning the matchups you should win and doing your best against the rest. Every elite team has stepped on any number of incompetent goobers on their way to the top. Look at Green Bay's schedule so far, particularly the defenses they've faced. There have been some good ones, but there have also been a lot of really really bad ones. So does that mean Aaron Rodgers' passing accomplishments somehow become hollow? Not a bit. His job is to tear apart defenses, and he's doing that, whether they're elite or not.

This has turned into a bit of a stream-of-consciousness rant as I've considered these thoughts, but to sum it up, my point is that the Seahawks' pass defense has been above average. It hasn't been elite. But it has definitely been above average, and don't listen to anyone who tries to point to their record of opponents as any kind of evidence that their performances have been hollow or deceiving.

Now, all that being said, I'd like to look into a couple plays from the Eagles' game last Thursday night. To the jump!

This was the second game in a row I spent screaming myself hoarse and dizzy in the CLink. The game against the Redskins started well and ended disappointingly, but the Eagles' game was glorious. I absolutely relish any moment spent screaming with fellow Twelves. We have some freaking good football fans here in Seattle, guys.

In fact, toward the end of the game, during the Seahawks' drive after Browner's second pick, you could hear the chants on the TV broadcast: "EAGLES SUCK! EAGLES SUCK! EAGLES SUCK!" Those chants actually began in the section my friends and I were in (#327, up above the south endzone). There was a large contingent of Eagles' fans up to our left who had been chanting "Seahawks suck, Seahawks suck, Seahawks suck!" often throughout the game, though obviously growing quieter as it wore on. In fact, a couple of them were escorted out by security at one point, though we couldn't tell why. After the Hawthorne pick-six and the Browner pick to ice it, everyone surrounding them turned on them and let 'em have it. Apparently the rest of the stadium followed suit.

But back to the play.

Without picking through play by play to absolutely confirm this, I will assert that this was the longest play from scrimmage the Seahawks' surrendered in the game. It was obviously a broken play, but what caused it? Let's take a look. First, the pre-snap alignment for both teams. 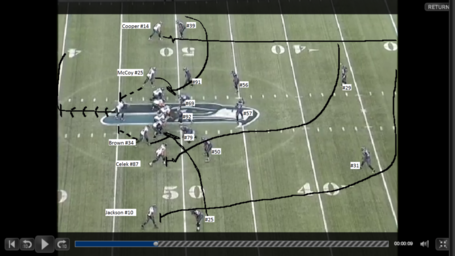 I have marked each Seahawk defender with his number, and have named the Eagles' receivers, as well as drawing out their routes, and outlining Young's dropback. Here is an alternate view: 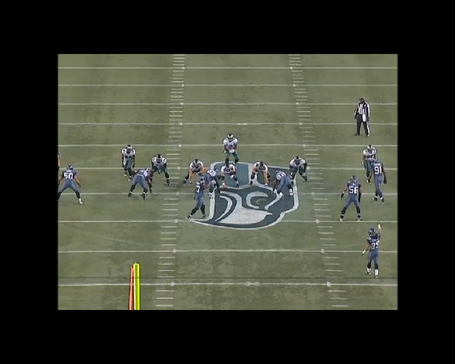 Just as I took this shot, which is less than a second before the snap, Kam rapidly begins backpedaling out of view, and Hawthorne urgently looks toward Hill and Browner making some sort of a call. When the ball is snapped, Hawthorne almost seems to get caught with his pants down momentarily.

On the offensive side of the ball, Vince Young starts under center with LeSean McCoy and Ronnie Brown lined up behind him to his respective left and right in a split-back look. As Young drops back into the shotgun, McCoy and Brown shift up to their current spots, as indicated by the dashed lines. 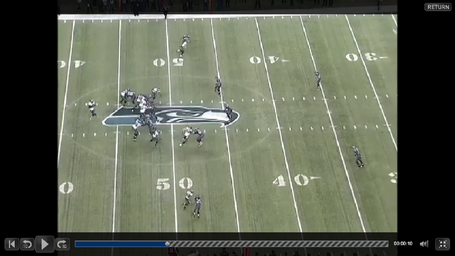 McCoy and Brown both chip in and roll out into the flats. Cooper and Jackson stutter-step and head deep to the inside of Browner and Sherm. Celek ends up being the key to this whole play. He takes a step directly at K.J., then ducks his shoulder under K.J. inside shoulder and runs past him. K.J. releases him to Hawthorne, as Brown is releasing out into the flat in front of him. Celek makes a beeline for Hawthorne's outside shoulder and wraps his rote perfectly around behind him. Hawthorne trails. Hill has shaded toward the offensive left flat to defend McCoy. 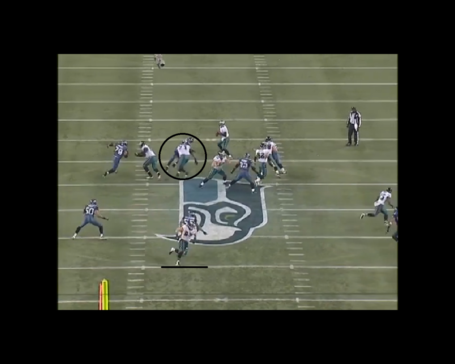 Meanwhile, Clemons has blown to the inside of Peters and completely owned him. His inside move is quick and deadly. Peters is left with naught but to desperately cling and try to push Clemons through and out the opposite corner of the pocket. He succeeds marginally. A lesser tackle would have held.

McDonald has stunted around the outside where the LG nearly holds him as well, and the two combine to flush Young from the pocket. 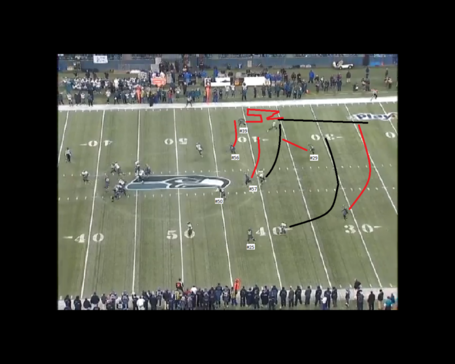 Downfield, Celek's route has wreaked havoc among the Seahawk defenders. I've outlined the Eagles' routes in black, with Jackson running the deep in from the bottom, Cooper running the fly on the top, and Celek rounding over the top of Heater and heading across toward the Philadelphia sideline. The Seahawks' angles are outlined in red. Heater trails beneath and slightly behind Celek, Kam shadows over the top of Jackson, and Hill stays close enough to McCoy to keep him out of the equation.

As humorous as it looks above, that is almost precisely how Browner dances. At first I thought it was him blowing coverage on Cooper and releasing him deep when he sees Celek coming across the field. But on the opposite side, Sherman releases Jackson to Kam at almost the same spot, so after everything, I think this one is still on Earl.

He bites HARD on Celek's route. Granted, the route is a thing of beauty. And I think if he hadn't jumped it, the pass would probably have gone to Celek. But in doing so, he allowed Cooper behind him, and in the words of Mayock, as a third-level defender you cannot allow anyone behind you.

So there are positives and negatives to take from this. The pass rush from Clemons and McDonald dominated the Eagles left side, and Bryant and Mebane provided enough penetration to force Young out of the pocket and to his left, where a pass becomes more difficult. Kam's recovery speed to make the tackle is impressive for the big guy. Honestly, I think we have Jackson's route to thank for that, because if he ran a fly mirroring Cooper, I don't think Kam Bam would ever be in position to make that tackle.

Anything else stick out to you guys?

Oh, and one more thing. A textbook example of how to beat a speedy receiver with press coverage (top of your screen). 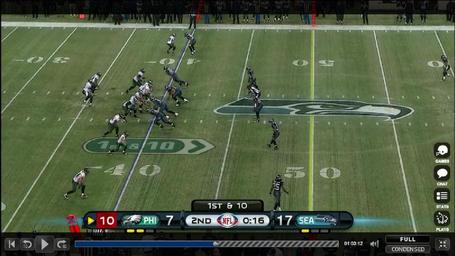 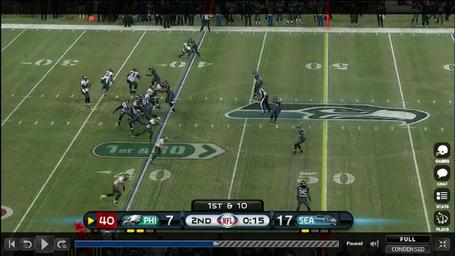 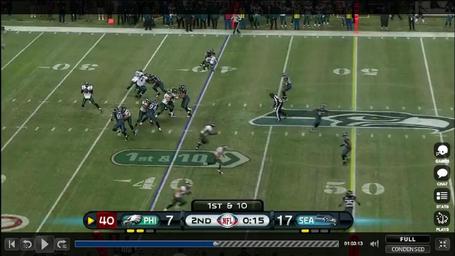 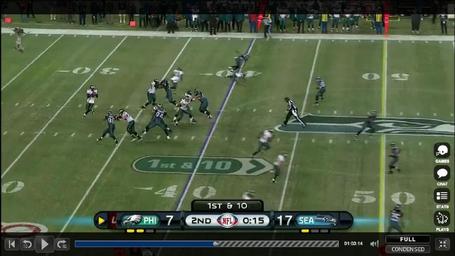 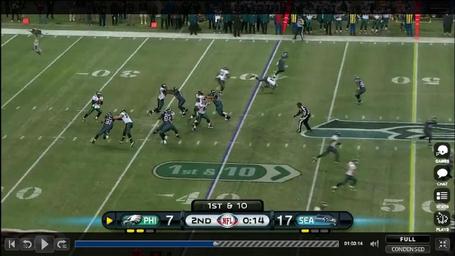 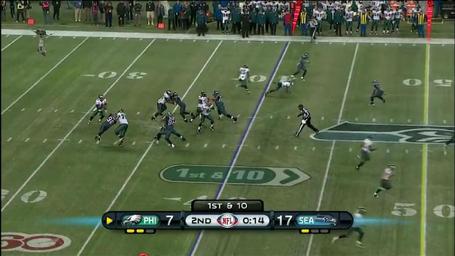 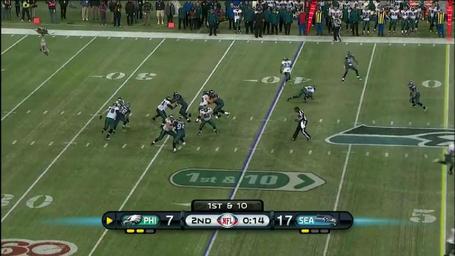 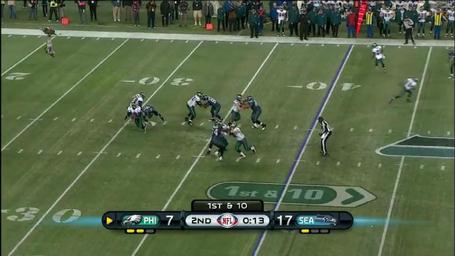