It's relatively easy to examine and break down Seattle's defensive identity and philosophy, or that of most teams, really. In general, the Seahawks run a 4-3 with some 3-4 tendencies, play some nickel, a little bit of dime, and every now and then they break into their 3-1-7 'bandit' formation. For the most part though, they depend on their base scheme and look to execute. They stop the run, the limit big plays, and they're physical. They play press on the corners, the shift between over and under looks. Nothing really that exotic. Some blitzing, some zone.

Examining any team's offense, when it comes to the actual plays and strategies, is typically more complicated. Offensive playbooks can be hundreds of pages long and have infinite wrinkles. The play names are thirty to forty syllable lines of jibberish that apparently mean something but just sound complicated and confusing to me. I'm not going to try and talk about what specific plays Seattle runs the most or try and point out why they run specific sets, or against which defenses. What we can talk about, and one way to simplify what is undoubtedly a complicated offense, is the Seahawks' proclivity in running with certain personnel formations, specifically tight-end heavy sets.

First, a little background. In their last four games, the Seahawks are 3-1, have outscored opponents 84-61, and have rushed for 543 yards (135.8 ypg) on 3.9 yards per carry. In the last four games, in reverse chronological order against Philadelphia, Washington, St. Louis, and Baltimore, the Seahawks run:pass balance has looked like this:

I don't know how much these numbers have to do with opponent or an unflagging determination to establish their run game. I don't know if this is a tenable strategy going forward, but it is distinctly different from the beginning of the season and going into last season as well. In terms of personnel preferences that are emerging, the easiest pattern to see is the increased usage of two and three tight end sets.

First, to compare to last season, here's an except from something I wrote in the offseason about how the Seahawks would use their tight ends going forward. I said, 'Using Brian McIntyre's excellent and praiseworthy formation tracking from 2010, I found that in the win versus New Orleans in the Wild Card game, the Hawks used two tight ends 24 out of 61 plays, or 39% of their offensive plays.

It's kind of funny how I wrote 'whopping' in reference to the Hawks using two tight ends in 50% of their snaps, because in the last four games, here's what the Hawks have been doing with Zach Miller, Anthony McCoy, and Cameron Morrah (h/t to Chad Davis again for his game charting):

Total in last four games: 137 out of 249 plays, or about 55% of their total offensive snaps with two or more tight ends. It's like they're Stanford or something.

As I wrote in the offseason, the use of tight end heavy packages is a big part of the Seahawks' offense. Apropos that the Seahawks are playing the Rams this week, I wanted to again point you to a really great article from over at the Turf Show Times that was, too, written over the offseason. Writer Joe McAtee, aka 3k, wrote about two TE sets and why they're effective (with reference to New England's offense), and pointed to their recent draftee Lance Kendricks as the object. If you want to glean one thing from the whole thing, it might be this sentence:

"The biggest strength in utilizing a second tight end with regularity is managing possessions, killing the clock and wearing down defenses."

In the last four games, here is what the Seahawks' time of possession has looked like:

So, the Hawks use two tight end sets a lot. It's easy to read that and notice this on the field, but I wanted to take a quick look on how exactly they're using their tight ends. The two most frequent formations they're using are the "22" set - two running backs, two tight ends, and their "12" set - one running back and two tight ends. Here's a quick look on how often these sets have been used in the past four games, and whether the Seahawks are passing or running in those looks (and also the trend we're seeing in their use).

So what you can see here is that as we get further into the season, the Hawks are leaning less on their one running back, two tight end look ("12") and throwing Michael Robinson in with Marshawn Lynch, Justin Forsett or Leon Washington and leaving just one wide receiver on the wing ("22").

I want to take a look at how the Hawks are using their 22 personnel grouping, so I picked out a few plays from the Seahawks last game against the Eagles.

This is a basic play look the Seahawks ran quite a few times. An essential pairing with a strong running game is the effective use of play-action. The Hawks were quite effective in play-action last Thursday, and here is one example.

The Hawks set up on their own 40, with Golden Tate out to the left weakside, and Zach Miller and Cameron Morrah lined up in-line on the strong side. Prior to the snap, as you'll see out of this look pretty often, Morrah motions out to the right wing. Ball is snapped, Tarvaris Jackson fakes the handoff to Lynch as MikeRob leads through the line.

Lynch will swing out to the left after the play-action fake and Michael Robinson out to the right, where Tarvaris Jackson will hit him with a little outlet pass. 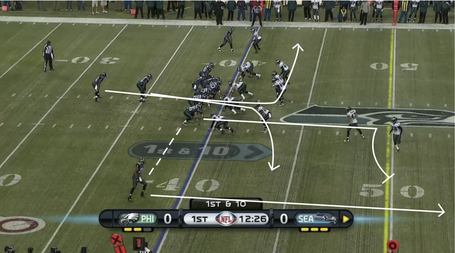 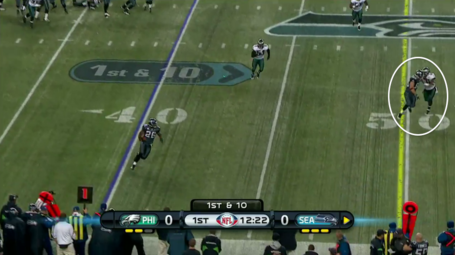 Morrah runs a streak and Zach Miller releases to block downfield, which, to no one's surprise, he does very well. TJack hits Michael Robinson in the flats and he gets some help from Miller (circled) in picking up the first down on a 19 yard reception.

With so much of Philly's focus on stopping the run here, this little dumpoff to MikeRob works like a charm.

This next play is an example of a run the Seahawks will run from this look. As is pretty standard, at least in this game, Morrah sets up to the right with Miller in-line, but then instead of going to the right wing he motions left.

Michael Robinson leads through the B-Gap upon the snap and that gets the attention of two of Philly's linebackers, shown in light blue. Lynch then breaks through the gap they've left open and gets a key cut block from Paul McQuistan on the strongside linebacker.

The run goes for nine, and I saw the Hawks do a very similar look several times throughout the game. 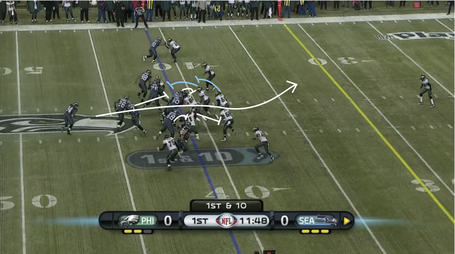 This next play is a stretch run to the outside by Marshawn Lynch, with Robinson leading the way. The Hawks have a balanced two tight end set here, with Miller to the right and Morrah to the left. 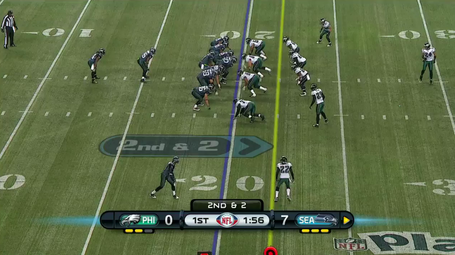 Upon the snap, Philly actually does a decent job getting to the edge, and I've circled the Eagles weakside linebacker rushing through the B-gap in an effort to head off MikeRob. In this case though, Robinson leads to the outside instead of crashing through that gap. 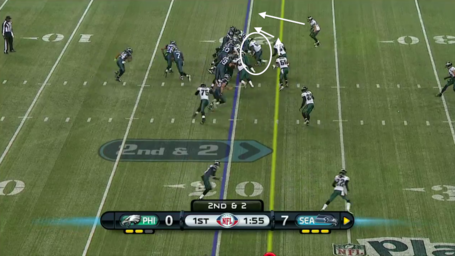 This play isn't a great example of Seahawks blocking, but rather just really good running from Lynch. Below, you can see that he's pretty bottled up, with middle linebacker Jamar Cheney about to stuff Lynch for a loss. 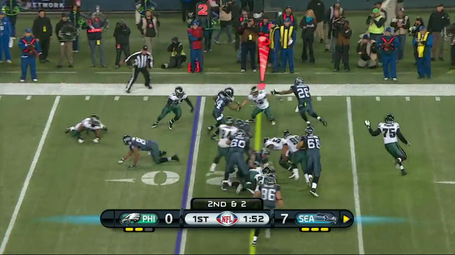 Lynch has other things in mind, cuts upfield breaking two tackles, and picks up 16 yards. This stretch play to the outside was used on several occasions, with varying degrees of success.

This next play is where play-action comes into effect again. As the Seahawks ran out of this set 18 times to their 7 passes, it's natural for the defense to anticipate the run. To counter that, the Seahawks targeted Michael Robinson out of the backfield. 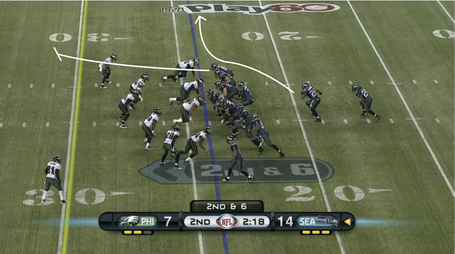 Zach Miller, set to the right, is going to release downfield and the Hawks will run play action with Robinson and Lynch crashing to the right. 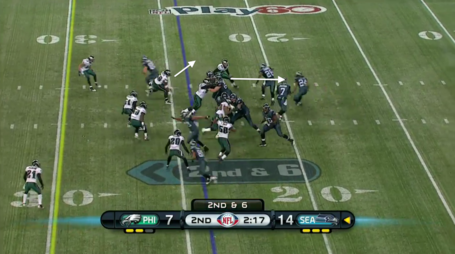 As you can see above, the Eagles defensive end is going to take Marshawn Lynch and pretty much ignore Robinson. This leaves a linebacker (sometimes the middle, sometimes the weakside) responsible for Robinson. In this case, Robinson has a step on the weakside linebacker above as he's still sort of waiting for Lynch to take the handoff. Once TJack hits MikeRob in the flats to the right, the Eagles are out of position. The pass goes for 11 yards and a first down.

This final play is remenicent of the first play I broke down. You'll see Robinson and Lynch release through the line after play-action and swing to the flats. Zach Miller, instead of blocking to the right for Robinson as we saw in the first play, instead releases downfield and catches a dime from Tarvaris Jackson. I broke down this play in detail earlier this week. 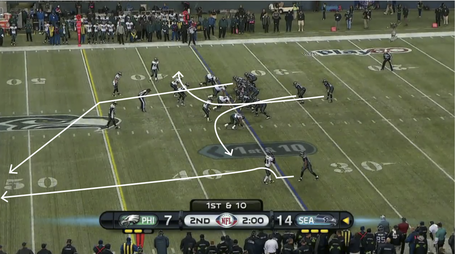 I'll follow up with the other end of the spectrum - the Seahawks' use of wide receiver heavy sets - later today. Stay tuned...