Earlier this morning I wrote about the Seahawks' use of 'heavy' or 'jumbo' (or whatever you want to call them) sets with two and three tight ends this season; if I remember correctly I thought I saw Brian McIntyre tweet a bit ago that on the season, the Hawks are approaching 40% for the number of total snaps with 2+ tight ends. Per our charting here at Field Gulls, the Hawks are using these sets around 55% of the time in their last four games (we've only charted the last four), and eclipsed the 70% mark against the Eagles.

The trend makes sense - the Hawks are trying to run more, they've got a lot of talent at the tight end position, and the injuries on the offensive line mean a little help there isn't a bad idea. With Cameron Morrah back in the mix, his hybrid TE/WR frame makes it easy for the Seahawks to motion him out to the wing and play receiver, forcing changes from the defense and creating mismatches. Zach Miller and Anthony McCoy are excellent at downfield blocking and simply put, these formations have been working pretty damn well. Why not stick with them?

An advantage to using these sets with such frequency is that it opens up play action and it also affords the Seahawks the chance to change things up at randon times, and you will see them break out four- and five-wide-receiver sets now and again. Particularly, against the Eagles, these sets worked extremely well.

The Hawks ran out of their 4WR ("10") look three times, and out of their 5WR ("00") set twice. In the three of those five plays I broke down (below), the Hawks picked up 62 yards and a touchdown. Not shabby. Turns out the Seahawks have a pretty talented receiver corps as well and combined with their weapons at TE, all this in theory just really makes me intrigued for what this offense could do with relatively normal health.

As for now, without Sidney Rice, the Hawks are down to Golden Tate, Ben Obomanu, Doug Baldwin, Mike Williams, and Deon Butler at receiver, and that's the group we'll see in the following play.

This play comes early in the game, on a fairly key third down. With no conversion or no gain here the Hawks would be looking at a 53-yard field goal attempt, or so, but they decide to spread things out. The Eagles are lined up in a fairly standard 4-3 nickel (in what looks like a zone), with Nnamdi Asomugha in the slot left and linebacker Keenan Clayton to the right. Jamar Cheney is in the middle and he'll be one to watch. Chalk this up to a good change of pace play call by Darrell Bevell, as you're seeing two linebackers matched up with Seahawk receivers.

Below you can see the routes each receiver will run, Deon Butler on the bottom, Golden Tate, Ben Obomanu, Doug Baldwin and Mike Williams as you go across the field. 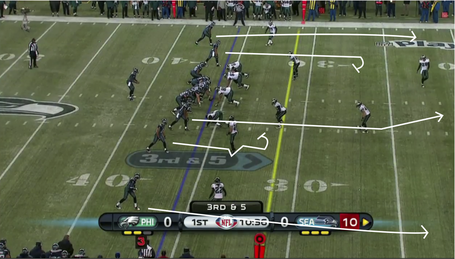 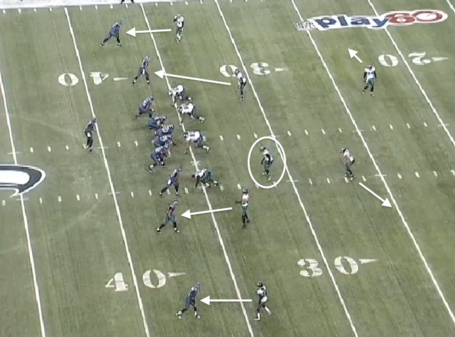 Above, the All-22 gives you a better picture of the Eagles' coverages. The two corners are on the outside; Nnamdi will stick with Tate in his zone; Kurt Coleman and Nate Allen are the two deep safeties, and they'll each drift outside; Clayton will mark Baldwin in his intermediate zone, and middle linebacker Cheney will have to decide whether to follow Obomanu or Tate in their routes. This proves to be the difference.

On the snap, above, you can see Obomanu running his route. Kurt Coleman is watching him from his safety spot and MLB Cheney seems more dead set on watching out for Golden Tate (look at his gaze). 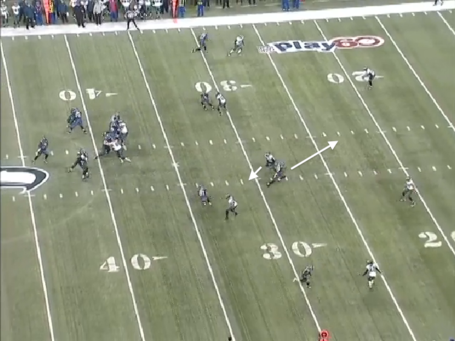 Above, you can see from above that Cheney commits to the short route, leaving the middle of the field open. Coleman and Nate Allen are too far back to cover Obomanu as he streaks down the middle on a post-route. 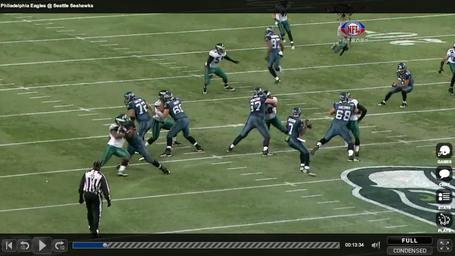 Here's an approximate view from TJack's angle as he sees Cheney looking to Tate. This one is easy money. Jackson lets it fly to Obomanu down the seam, who picks up 26 yards.

Later, into the 2nd Quarter...

Another 3rd down play, four yards to go. Golden Tate has taken the previous play for 8 yards on what is officially a lateral but was essentially a swing pass. The Hawks now line up in a four-reciever set with narrow splits. The all knowing Mike Mayock has a timely analysis on Tate as the Seahawks are going into the huddle, offering this prophecy:

"Do you remember the position he played when he went to Notre Dame? He was a running back, so it's difficult for him to learn how to run routes. He's a raw, explosive kid.

However, once he gets the ball in his hands, he's special."

It's impossible for me to tell here but easy enough to guess - from the looks of it, Tarvaris Jackson sees the coverage and probable blitz coming on and makes a 'hot route' call. (In other words, he yells something in the receivers' directions prior to the snap changing the play; if I'm guessing correctly (and it seems likely I am based on what happens), he switched to receivers' routes to a blitz call so he can get rid of the ball very quickly).

Below, whether this was the original playcall or not, here is what each receiver is going to do, with obvious hot routes by Obomanu and Tate. 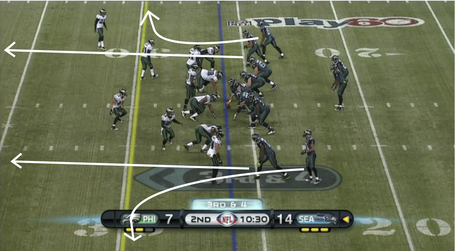 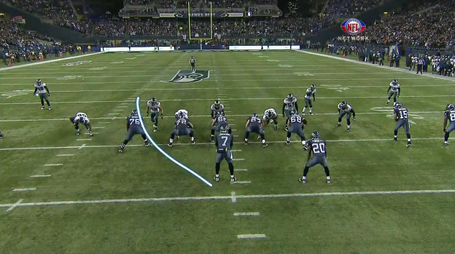 Above, you can see what Tarvaris is seeing - eight men in the box. Mike Mayock has drawn up where the blitz will be coming from. Justin Forsett takes the nickelback spying from the right, leaving the safety Kurt Coleman unchecked through the B-gap. 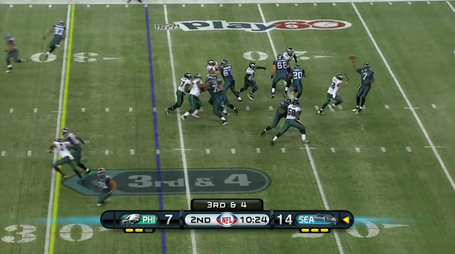 As you can see above, Coleman comes through untouched and Jackson throws the football even before Tate is looking, as shown above.

Tate does a good job to get his head around and makes the catch, a few yards short of the first down. He turns, makes Nate Allen miss, heads upfield, makes two more players miss with a nifty spin move (his signature) and herks and jerks ("now he's turning into a running back!") his way to 25 yards. 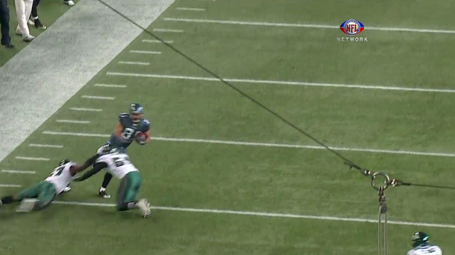 Third quarter, another big third down play here. The Seahawks break out of their 'heavy' routine and spread things out, offering up four wide receivers, with Justin Forsett in for pass protection. From top to bottom (left to right) - Mike Williams, Golden Tate, Doug Baldwin and Ben Obomanu. I've outlined their routes. 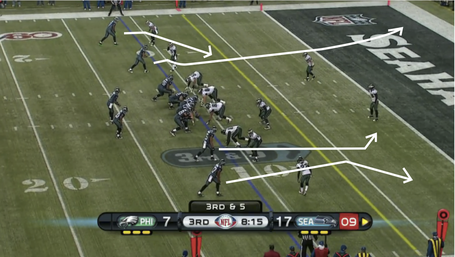 Ball is snapped. Circled are the Philly defenders - all seven of them dropping back into coverage. 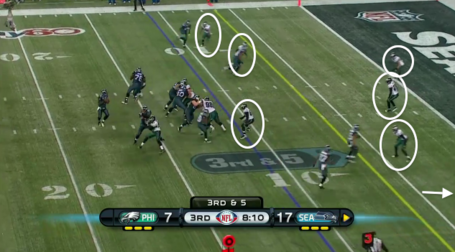 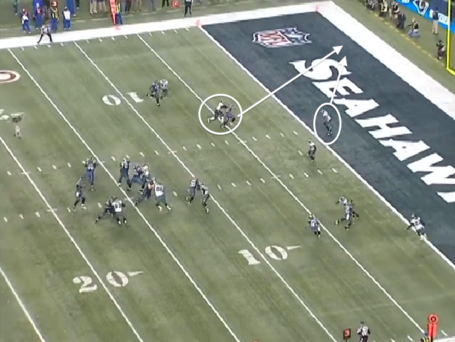 Golden Tate runs up the hashes and towards the back of the endzone. Right about at the moment above is when Jackson decides to throw it up for Tate. He'll be marked by two Eagles, but beat them both. 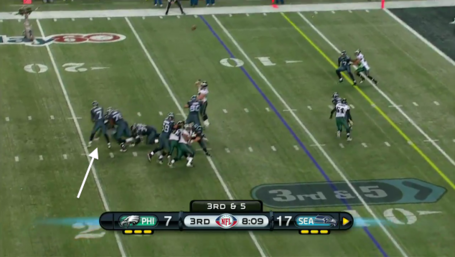 TJack makes the throw, drifting back under pressure from the left. The touch on this throw is truly impressive, - in a spot where literally no one else could get to it - something Jackson will do a time or two a game and remind you what the Seahawks saw in him in the first place.

Oh, and Golden Tate is starting to make some big plays, yo. 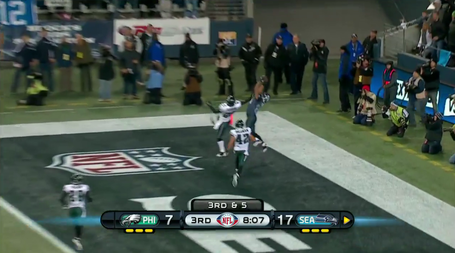 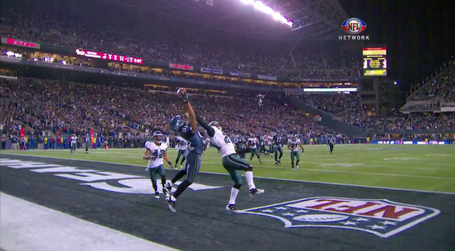 Keep an eye on these four- and five- receiver sets tonight.