Share All sharing options for: The Green Bay Model & its Influence On John Schneider Part II

First of all, part one of this study focused a bit on Ted Thompson's drafting, so if you've got a minute, I'd recommend going back to read over that before you proceed. Now, a little explanation on why I do this: as I have been reading and building models, fertile ideas have been flying all over the place. Why am I studying another franchise besides the Seahawks? Why have I purchased books on the Pittsburgh Steelers and plan on purchasing books on the Baltimore Ravens and other franchises? Why have I downloaded articles and studied the Green Bay roster on www.packers.com? Why?

Simply because I want my team, the Seattle Seahawks, to win a Super Bowl.

So, I figure I should study teams that have won and have a good chance of winning multiple Super Bowls. And I believe these franchises are not satisfied with winning just winning one, but expect to be in position year after year to compete for a Super Bowl. I believe that is Paul Allen's goal, and I believe that is why Pete Carroll and John Schneider are here in Seattle.

This triumvate wants to build a perennial winner.

It is not lost on me that the Packers are benefiting at a historical level from Aaron Rodgers quality of QB play in 2011. How good would the Packers be without Aaron Rodgers? 8-8. 10-6? I am not confident that I know. He may be worth 5 wins- which is an amazing level of value. He may be hiding major flaws on their roster right now.

Nonetheless, I still think there is a lot to glean from this organization. Paul Allen and Pete Carroll thought so when they hired John Schneider.   I do know this - the Packers did draft Aaron Rodgers before any other team - and they did draft him with a good quarterback already on the roster. They get credit for that.

They also get credit for building a roster and a team in a manner that will allow the Packers to pay Aaron Rodgers market rates (upwards of $20M) for his talents for the remainder of his career and most importantly, when his next contract comes up. He does not make $20M today, but I am fairly certain he will.

A few more disclaimers: John Schneider is not Ted Thompson (from hereafter "TT") and I do not think the Seahawks will implement the "pure" Green Bay system in Seattle. I say that for a few reasons: (1) John Schneider has said that he will be more aggressive in free agency and has demonstrated that in his time in Seattle, (2) Pete Carroll makes the final decisions anyway, (3) the roster Pete Carroll & John Schneider (from hereafter "PCJS") took over in 2010 was in worse shape than the roster TT took over in Green Bay in 2005. The 2004 Green Bay Packers that TT inherited won their division at 10-6 and had a quarterback that threw for over 4000 yards and 30 touchdowns.

WIN FOREVER VS THE CYCLE

Listening to sports radio in Seattle, as I often do, I recall a time in 2009 when ESPN's Brock Huard mentioned a conversation he had with his grandma. I think he calls her "opa" or something like that. Anyways, she asked, "Why are Seattle sports teams so bad?" The Huskies were in a losing season, fresh off the 0-12 year. The Sonics had left town two years prior. The Mariners were losing 100 games. The Seahawks were in the process of going 5-11 under Jim L Mora.

Brock didn't exactly know - but he said something to the effect of "Maybe, it's cyclical." The Cycle. Like a business cycle?

Expansion, Bubble, Crash, Recession then Expansion again, like the economy?

In sports maybe I could liken it to the Holmgren Era, which was very successful, and I do not dispute that. He spent the early years locking in key players, then formed an identity and let the key players grow together. As the key players peak, at the same time, you hopefully compete for a Super Bowl.

After the peak you may enjoy a few more good years and then age and injuries and free agency begins to erode your team. Alas - you finish 4-12 and 5-11 back-to-back and then draft some good players with high picks and begin the cycle again.

Pete Carroll and John Schneider do not want the cycle, they want to Win Forever. Pete Carroll won seven straight Pac-10 Championships. In his 9th season at USC he went 8-4. Lane Kiffin went 8-4 in his first year, but just capped out a 10-2 season. Credit to Lane. Also, credit Carroll as right now USC would probably be a challenge to every college team in America, including LSU. Kiffin recruited a lot of the players, but so did Carroll. Despite the sanctions, USC is still Winning Forever.

In the book, Win Forever, within the chapter "Hard Lessons in New York," a younger Pete Carroll strolls onto the field at night after his first big win in Buffalo and stares up at the rafters with no one but the cleaning crew in his company-

As I write this, Green Bay is 12-0 and is winning with the 4th youngest roster in the NFL. Currently, the three rosters that are younger than Green Bay all have losing records: Tampa Bay, Carolina, and Seattle.

You would think a Super Bowl winning team would be cresting in their age cycle, yet that is not the case.  The 2011 NFL season could very well end with Green Bay hoisting another Lombardi Trophy. Is there any sign that the team as it is currently constructed will begin to dismantle due to age or losing players via free agency? At first glance the answer is no.

In 2008, Green Bay drafted 9 players - which is an important note as I detail that further in this series. Green Bay has already signed Jordy Nelson and Josh Sitton to longer term contracts. Great contract staggering and long-range planning has been shown. My feeling is that they will let Patrick Lee and Matt Flynn walk at the end of the year. They will re-sign Jermichael Finley to a large contract. Brian Brohm is out of the NFL. Jeremy Thompson had a career ending injury. Breno plays for the Seahawks. Brett Swain is on the 49ers active roster. Not TT's best draft, but not a bad draft at all.

Green Bay should be very competitive in 2012 and beyond.

THE RULE AND THE EXCEPTIONS

Here is the Green Bay model in a nut-shell. Stock your 53 man roster with about 30-35 players on low-cost rookie contracts. 19 out of 20 of these "rookie contract" players were drafted directly by Green Bay or signed right after the draft as rookie free agents.

Right now, Green Bay has 32 players on these rookie contracts and 20 players on Free Agent contracts.

When you sign a player to a non-rookie contract - in 9 out of 10 cases - make that a player that is a player that you drafted and has performed well in your own system for 3 to 4 years.

Of the 21 players on Free Agent contracts - they break out in 4 Categories:

TRUE FREE AGENTS (2) - year specified is when they joined GB

EXCEPTIONS (3) - year specified is when they joined GB

Peprah spent most of his career in Green Bay but was on KCC roster for a few games on special teams, Walden was picked up in 2010 but had bounced around the NFL since 2008. Evan Deitrich Smith was with Seattle for a short cup of coffee but I am not even going to mention him - he is a Green Bay guy.

Green Bay has 45 players on its 53 man roster that Green Bay originally drafted or acquired directly after the draft in rookie free agency. Only four players on the roster have logged significant snaps for another NFL Team (Pickett, Woodson, Green and Walden).

TT took over the Packers in 2005, and signed Woodson and Pickett in 2006. He also picked up Tramon Williams in 2006. The Packers haven't had a key contributor sign a big free agent contract, after being drafted by another team, in almost 5 years! Ryan Grant never played for NYG during the regular season.

I have created an over simplified Green Bay model below for the sake of illustration. This is not exactly how the team is constructed, but demonstrates some basic concepts.

I have mentioned in previous articles that TT drafts, on average, over 9 players per year despite how successful the team was the prior year. It's been a consistent theme in his seven drafts with the Packers. By stocking your team with young cheap players, it frees up money in the salary cap era to pay your best players when their rookie contract comes due.

The model is not designed to free up money to pay a free agent that was a star in another system. I don't count Woodson and Pickett as they were signed in 2006 in the TT early years. Now that the model is mature the Packers do not sign big time free agents that performed on other teams.

So, the stocking of the roster frees up money to pay free agents - but only your free agents - not other team's free agents. My guess is that signing another team's free agent is risky because you have less information on that player in terms of: character, leadership, injury history, practice performance, fit in your system and a host of other factors. By only signing your own team's free agents, you may miss out on some opportunities on other great players, but you also mitigate tons of risk. This system also does wonders for your continuity and unity as a team. Too much turnover is bad.

In theory, Green Bay can always pay market rates to their stars and not risk losing them to another team. It also may mean that the players on big contracts on Green Bay are better on average than similar type players on other teams. Can you name a really good player in the last 5 years that left Green Bay as a Free Agent?

All this is modeled below, 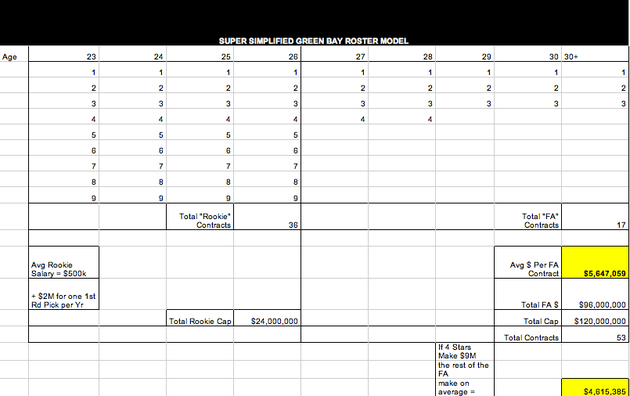 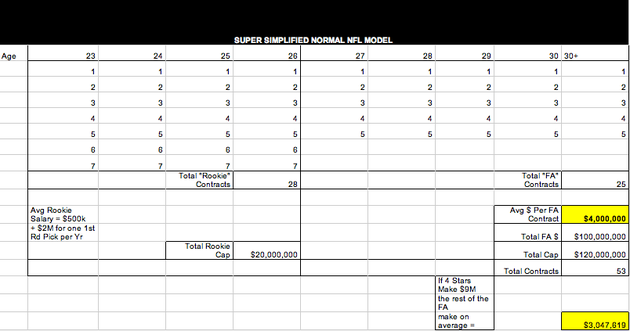 In a few days, I will go into more detail on the actual Green Bay model, which is more nuanced than the attached super simplified model. I will use the names of the actual players on the 2011 team and group them in their draft year/age year.

I will also go more in depth on the importance of signing rookie free agents in Green Bay, the steps each year Green Bay could take to keep the roster young, and how this model can have some influence on what Seattle may do this offseason.