Share All sharing options for: The Seahawks' Top Five Defensive Plays For Week 14

You guys know the drill. I'm going to lay out a few nice defensive plays by the Seahawks from Monday's win over St. Louis, and you're going to tell me which one was the best. Shoot, we could do this every weekend. Alright? That alright with you? Yeah, keep bangin'.

This first play isn't so much a 'defensive play' as it is a 'special teams' play but I don't care. The Seahawks, after giving up a few first downs to the Rams on their first drive of the game, managed to stop St. Louis' momentum at their own 37 and force the offense off. The Rams line up to punt.

Jaws mentions Doug Baldwin creeping in from the wing and a St. Louis player mirrors him. I will leave that St. Louis player, playing in his first NFL game, nameless because he's probably now cut. Regardless, Doug does this: 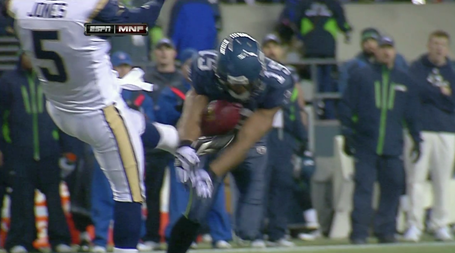 If you've read anything I've written about Doug Baldwin, the same thing I keep saying is that "Doug plays mad". He's that uber competitive guy that you LOVE to have on your team and hate to play against. After the blocked punt led to a touchdown, you'd think that, as many players do, he'd be smiling, laughing and jumping around. Not really the case with this one. 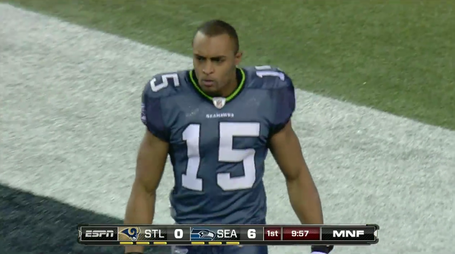 A Forrest Gump quote comes to mind (because I love Forrest Gump): "Now me, I was scared, but Lieutenant Dan? .. He was MAAAD."

For some reason, I feel like this clip perfectly captures how Doug Baldwin plays football. In a good way.

This next play shows a little bit of K.J. Wright's versatility as he comes off the edge to sack Sam Bradford.

Browner's interception came on a poorly thrown pass but was a nice pick nonetheless. Also, you can see that K.J. Wright, - who had a very good game in my opinion - almost tips this pass. Wright's positioning possibly forced Bradford to adjust where he wanted to throw the pass. 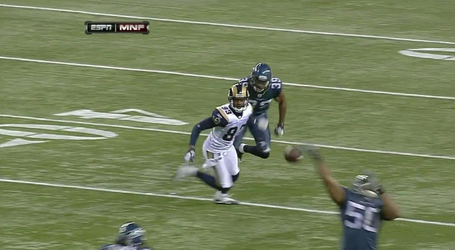 This is Chris Clemons abusing a backup left tackle.

I wanted to highlight two Brandon Browner plays in one because the plays were back to back. On the first, Browner is backed off about 10-15 yards in a zone, allowing Austin Pettis to catch a quick out in the flats. Browner is fairly unheralded for his physicality on the outside, in tackling in particular, and this is a good example of the force he applies when bringing players down. I have one still of this where Pettis literally looks like a rag-doll.

After demoralizing Pettis on a simple out route, Browner tips away a pass from Brandon Lloyd on third down to get the Seahawks' defense off the field. I'd have loved it if he had turned his head around to see the oncoming pass, but he does a great job of swiping the football out of Lloyd's hands when he tries to make the catch. 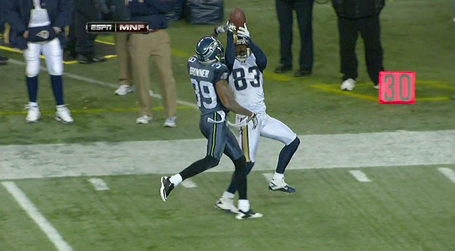