Mike Williams and the See-It-Throw-It Quarterback

Share All sharing options for: Mike Williams and the See-It-Throw-It Quarterback

Mike Williams' performance has dropped from last year in a way no one would have predicted. Going from a 65-catch, 751 yard season to what is now projected as a 15-catch, 260-yard performance, well, that's quite a significant drop off. Even with our number one receiver out he's barely showing signs of life, as younger and - quite frankly - better players are grabbing the spotlight. In fact, he did not start last game, in a technical sense, since the Seahawks started the game in 22 with Golden Tate as the lone receiver. He's still technically the starter, but I can't offer a good reason as to why he is.

For me, Mike Williams was a hard player to peg following last season. I tried doing so in two write-ups entitled BMW is a number one WR and BMW is not a number one WR, but I'm not so sure I did even a half-decent job. It's hard because he doesn't really fit any prototype. His only outstanding assets are his size and body control. He's not a typical possession receiver because he lacks precision route-running and excellent hands of a possession receiver. He's not a field-stretching receiver because he lacks speed. He's not that great a tweener either because he lacks short-area quickness. He's close to a non-blocking tight end in skillset but not in how he plays. Obviously, with all those limitations he still put up a 751-yard season and he's not a bad player by any measure, but this serves to remind us of a truism worth keeping in mind for the NFL: the more limited the skillset, the more quickly a player is influenced by changes in context, in the team's roster, coaching, matchup strength or when switching teams entirely. This is especially true for WRs, with many reminders available throughout the NFL's history (read: Harper, Alvin, particularly here).

For BMW, it's all about changes in the roster, specifically at quarterback. When talking about this position, one term Greg Cosell likes to use is "see-it-throw-it"-type quarterback. These are quarterbacks that do not throw ahead of the receiver beating his guy, that are limited in their ability to analyze matchups or grow proper timing with their receivers. The anti-WCO players, in other words. Vince Young is your prototypical example. Most of the SITI QBs are bad, and will always remain bad, or at least limited. Some transcend their limited reading skills by physical acumen, the most pronounced example being Jay Cutler, who compensates with outstanding accuracy and velocity. Tarvaris Jackson isn't a perfect example of a SITI quarterback, he can get in a rhythm with receivers where he makes nice, timing-based throws. But his tendency to hold on to the ball is tied directly with his shying away from receivers that look covered, but aren't really. This is something Cosell said would happen prior to the season, and it did. Matt Hasselbeck is the opposite. He would see the one-on-one matchup with Mike and almost instantly know where to throw it where only BMW can get it. That's part of what made Hasselbeck a better quarterback than Tarvaris is ever likely to become.

This problem didn't show up so much with Sidney Rice. A lot of that has to do with Sidney Rice's skillset not being as limited as Mike Williams', with much better hands, better route-running and better speed. And a lot of it has to do with Tarvaris being much more familiar with Rice. As a sidenote, Rice looks every bit the star wide receiver we hoped he'd be, which wasn't a sure thing considering he'd only had one outstanding season. Now if only he can stay healthy. Props to the FO for properly assessing how much our group still lacked a true #1 WR, too.

Keeping the above in mind, you can't really just note "it's the quarterback" and move on. Mike Williams isn't just under-performing, he's disappeared. And he's disappeared because he's a fundamentally flawed wide receiver. If I were to rank our current group of wide receivers by "talent" - an ever-elusive concept you can only be wrong about -it'd probably go Sidney Rice-Doug Baldwin-Golden Tate-Mike Williams-Ben Obomanu-Deon Butler (with no idea about Lockette or Durham), with Obomanu being much more valuable when Tarvaris Jackson is under center. It's easy to go "yeah, but Tarvaris isn't the quarterback of the future", but that's part of the problem, with a full off-season we should see more trust between the two and thus more output from Mike Williams. However, if we're starting a young quarterback soon I wouldn't just assume he'd be able to use BMW's unusual skillset. That raises the question of how much value BMW has for the near future. I don't think his skillset is fast eroding, yet I'm not particularly optimistic about his worth to this team.

Of course, whenever a veteran player sticks around on a young team but doesn't perform, the story always goes around that he's providing veteran guidance and leadership, and the same is true for Mike Williams. That's not to say he's not providing said veteran guidance, obviously he is, but I've heard this story a million times if I've heard it once, and it's not something that changes my valuation of BMW for the long term in any significant way. That noted, there's some insightful material in the Cosell Shutdown Corner podcast at about the 24 minute mark where they discuss wide receivers reading routes. Farrar notes how in this last Rams game Baldwin couldn't read the coverage in the first half, which was hampering his performance. BMW pointed out certain things at halftime and then Baldwin came out 4-4 to start the second half. That's pretty awesome.

I haven't seen charting data yet, but my impression if Mike Williams continues to play a fairly low amount of snaps, suffering under our antiquated proclivity towards the 22 formation - and please don't compare our tendency to line up two tight ends to the Patriots doing the same, it is an inherently different approach to offense. This wasn't a good game for our offense anyway, as the Rams could disrupt our passing rhythm with just four guys all day. We were bailed out by the Rams' terrible run defense, but that won't continue into this week. So it wasn't a great game to get notes from, but it's the freshest in memory so here's a few notes on BMW.

Seahawks go four wide. Rams blitz five and have four guys in man coverage with no underneath help. Mike Williams and Golden Tate both run slants on the offensive left side, and either one would've been a first down. Pretty easy scheme win as long as protection doesn't collapse. 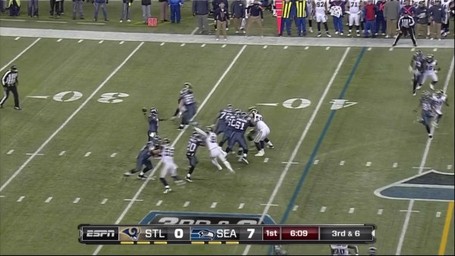 Not on topic but I like this play, Deon Butler's first (and only, for now) catch of the season. 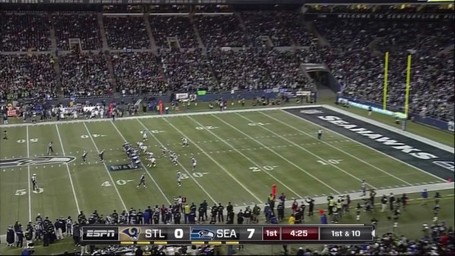 Prior to the snap, Butler is lined up as the flanker with the Seahawks in 22. He then moves behind the RT/TE combo prior to the snap. Snap, and Baldwin flies to the left. Tarvaris has a free rusher coming at him but makes the defender pause with a subtle pump/shouldertwitch to the right and then releases to Butler near the left sideline. 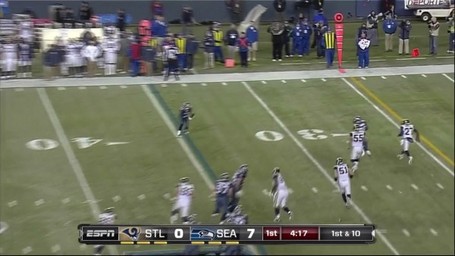 Butler gets four yards for free thanks to the play's design, and creates four more with a quick change of direction. Quintin Mikell makes up as much as he can on this poor Rams secondary, he's around the ball to an impressive extent.

Seahawks line up with Golden Tate as the flanker, Doug Baldwin in the slot and Mike Williams as the split end on the other side of the field. This is a good comparison play. Tate and Williams both run dig/in routes near the sidelines. Williams is being jammed, while the corners on Tate/Baldwin play about 4-5 yards off and are focused on the quarterback like they're playing zone (what can I say, it's a thrown together bunch). Williams beats the jam well (and I should note as an asset that he's a hard receiver to jam), and his route is a little deeper than Tate's, but you can see how slowly he turns here, which means he offers much more slowly developing route. Tate has pretty good short-area quickness, but still, he's already catching the ball by the point that Williams is turning into his route and well before BMW is ready to look back for the pass. It's hard to lose a corner if change-of-direction routes (in, out, comeback, curl, cross, hook) are as slowly developing as Williams' are, even if you run crisp routes - which he doesn't. And with that, note that our bad pass protection is also a big factor against passing to receivers that run slower routes.

Also man, the Rams corners had such a horrible game.

Please, networks, I tune in to see the game, make sure you show all plays fully. This one comes in with the ball in the air, a screen to Baldwin. Golden Tate and BMW have to block in front of Baldwin, and both do it well, though Tate has the harder inside assignment, and does get thrown just as Baldwin passes him. Our receivers are coached up well to block smartly though, which is good to see in action.

Again, unrelated but I had to talk about these plays. The first is a really good playcall, as the Seahawks are in 22 and the Rams completely bite on the run, but it is a poorly thrown pass. The second one is four wide, with an all-out blitz. Jackson creates some time with his legs rolling out to the right (the Tate/Williams side), but the ball is tipped and Hood is all over Tate to tip it. This is one of those plays where I wish I had all-22, because I'd like to watch all the optoins and see why Jackson picked Tate specifically, which was a high-risk pass.

Seahawks line up what is de facto five wide, from left to right: Ben Obomanu, Golden Tate, Cameron Morrah, Deon Butler and Mike Williams. Rams are in nickel with all corners playing with cushions and one of their defensive tackles dropping back. This allows the linebackers to split and cover Morrah and Butler, which frees up Mikell to move on to BMW. Chris Smith (the corner on Williams) gives an enormous cushion, FS Quintin Mikell moves into under coverage as Jackson stares down the matchup, but the throw has good zip which puts it out of his range. And that's it for BMW, he was targeted two times all game according to official charting, behind Baldwin (7-8), Tate (3-7), Forsett (2-5) and Miller (2-3) and the same amount as Lynch, Robinson and Butler.