Share All sharing options for: The Seahawks Offensive Line and Context Sensitive Analysis

To set up this story, first read Charlie's story on the Beast Mode on the road and/or Danny's piece on the same subject, both on the Beast Mode in particular. I hate to cite Greg Cosell again but he's just so right so many times, as he said earlier in the season that he does not understand why Marshawn Lynch is not being used more as a foundational player for the Seahawks offense.

The easiest answer for us who knew the Seahawks indepth would be "because our offensive line is in flux". And here we were, weeks later, and both notions have proven true: once our offensive line "gelled" (with apologies for the trite terminology), Marshawn Lynch became the foundation of this offense, the motor that keeps drives running. Since the Bengals game, he has 706 rushing yards (117.6 a game) on 151 carries (4.65 YPC) with seven rushing TDs. And that's just contextless stats, anyone who watched his 3.4 YPC performance against Baltimore knows it was a very important 3.4 YPC performance, which you wouldn't normally assume a 3.4 YPC performance is. Tarvaris has 159 attempts, 26.5 attempts per game, so the balance is as atypical as it gets.

But where is the story at now? I've always kind of struggled to peg down a narrative for Marshawn Lynch, I didn't agree that he was "the worst starting running back in the NFL" as Evan Silva was prone to say in the first few weeks of this season, but I don't think he's a fundamentally different back now than he was before, even when he's performing well above a level where I expected him to perform this year. This feels really odd to write, but I think one of the defining factors on Marshawn Lynch is that he does not create big plays by himself. He creates a handful of yards, up to four, by simply beasting, but he can't overcome bad first-level blocking. And that is about as useless a criticism as I can offer, since there are almost no running backs that can operate with a bad offensive line (Adrian Peterson, Steven Jackson, some of that ilk), but I think it was the biggest factor in Silva et al underestimating Lynch before the season.

But! It's also a factor in overestimating him now. He's really really good, but he hasn't suddenly grown transcendent of his blockers. It certainly seems that way, as he put up 115 yards and a skittle-laden touchdown on the Rams after losing Okung on top of Moffitt and Carpenter. So was this wrong? No. Because I say so. Or rather, because the Rams are just that bad against the run. By Football Outsiders' DVOA, the Rams have been 30th in run defense so far this season, with only the Panthers and Raiders worse than them at stopping running backs. They're followed by the 3rd ranked Chicago run D, the 1st ranked San Francisco run D and finally a 24th ranked Arizona defense that has looked much improved in recent weeks.

I feel fairly confident in saying Lynch's performance is about to drop heavily through no fault of his own, which really shouldn't change our estimation of his abilities, since he won't rush against top-3 run defending teams back-to-back with half his offensive line missing that much in his career, I hope. If he does keep it up, even if it's a plodding 30 carries like he had against the Ravens, I'll be very impressed.

The opposing defense is a big part of context sensitive analysis regarding Lynch, but really Okung is as big a factor. Our blocking concepts changed so much with Okung out, I frequently noted a TE or RB in to help the left tackle, and inside protection was more of a problem with Gallery not as free to focus solely on the inside. The Rams are a very good pass-rushing team, but the pressure could be taken off through the run or by attacking the weak secondary. No such caveats apply to the Chicago or San Francisco defenses. That means asking more from Tarvaris, who has looked unsteady at best over the past few weeks, good one week, bad another, which is pretty much as expected.

But again, context, the issue with asking more of Tarvaris is that he's not being offered more to work with. Okung and Rice were his two pillars, and they're both gone. Can I then fault him specifically for a declining performance, in a vacuum? Eh. The front office know what his limitations are, which I hope is the reason we're as run-focused as we are (I have no reason to think PC has any delusions that you can run a reliable year-to-year contender with this kind of offense in the NFL). The quickest way to analyze the quality of a QB is to look at how little he's asked to do. Sanchez is the biggest example of that, completely protected by his offensive setup and bailed out by the defense. Tim Tebow is another. These two are not good quarterbacks, and neither is Tarvaris, but if Lynch's performance drops, we go right back to relying on Tarvaris by default. Not a pleasant scenario.

Here's a handful of notes on painful plays, consider it a lowlight reel from the first half as the offensive line did have better moments, three consecutive pass plays, two consecutive run plays. While the rush held up even with uneven blocking, the pass protection definitely did not. Consider those problems a warning shot across the bows.

Jackson trips up right after the snap. Robert Gallery and Max Unger shift to the right as Unger picks up a blitzing James Laurinaitis which means Gallery has to adjust to account for the one-tech. While shifting, Gallery steps on Jackson's foot causing him to fall. Just one of those plays. Gibson gets the sack for touching Jackson down.

Seahawks line up three wide, with Zach Miller next to Breno Giacomini on the right and Forsett as the single back. Rams tease the blitz with James Laurinaitis between the two defensive tackles (both of whom are listed as defensive ends on the depth chart), but rush four, with Chris Long at the 5-tech in the 4-point or "motorcycle" stance. Zach Miller releases in a route at the snap. 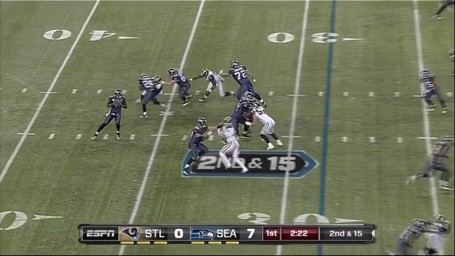 Giacomini drops back a full pace behind the rest of the line to stop Long just speeding past him, but this gives Long the freedom to punch up and then sidestep him. Lemuel Jeanpierre and Unger double up and stop Eugene Sims out of the 1-tech position. Gallery seems to have James Hall out of the 3-tech, but his hands are badly placed and he loses the defender. Paul McQuistan, for reasons unknown, seems unsure about whether to block Sims or Robert Quinn, and tries to keep Quinn off with one hand, which - as you'd expect - doesn't work. Justin Forsett is well positioned for the block but is seemingly taken off-guard by Quinn's speed and angle and his momentum takes him out of his own block. Gruden calls it a chip, but it's clearly not, it's a blown block. Quinn is the quickest and gets the quarterback hit, but it could've been pretty much any Ram rusher except Sims.

Seahawks now line up three wide, empty backfield with two tight ends inline (Cameron Morrah and Zach Miller). And here is where I praise the Rams defensive playcalling. Their personnel may not be up to snuff in the secondary, but they have some talent in the front seven, and they get creative, and this play is a great example as it took me quite a while to pick it apart. Rams are in a 3-2-6 formation. 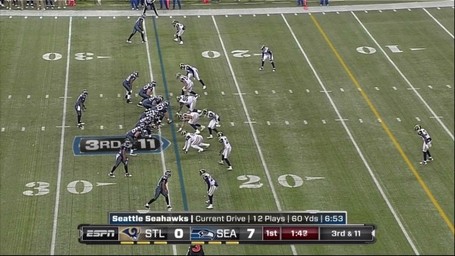 Like last play, all the down linemen are listed as defensive ends, from offensive left to right: James Hall, C.J. Ah You, Chris Long (in motorcycle again). Behind and between them are the standup guys, DE Robert Quinn, LB James Lauriniatis and SS Darian Stewart. Even cornerback Justin King, behind Long's left shoulder, is sneaking up on the box but he is easily identified as in man on Doug Baldwin. What a nightmare. Hall, Ah You, Long and Quin rush, while Laurinaitis picks up a releasing Morrah (and jams him hard) and Darian Stewart Zach Miller.

Chris Long gets a fantastic first step and it's clear why Giacomini backpedals so fast, as here it allows him to at least get a bit of Long and delay his blitz, though not by much. Jeanpierre is singled up against Ah You but he stands him up, effectively stopping him in his tracks. Unger picks up and effectively stops James Hall. Laurinaitis takes a few steps forward before jamming Morrah, which is a great play that completely fools Gallery, who ends up blocking no one. McQuistan was also locked on to Laurinaitis presnap, and apparently realizes too late Quinn is rushing from behind the linebacker. He adjust, somewhat, but is moving too late to get more than a hand on Quinn, who is in Jackson's face as he throws, Long not far behind him. Outschemed, outplayed, ugly.

Seahawks in their 22, Rams in a zone defense. Rams obviously read run and Quintin Mikell is in the box, with OLB Brady Poppinga lined up on the offensive right on the line. By design, McQuistan and Morrah release on the left side to block downfield. The rest pull left, and Gallery effectively takes out the defensive end Robert Quinn. Quintin Mikell comes in from the box, Michael Robinson attempts to block him but doesn't really move him aside so that Lynch would be released. Lynch has to keep moving to his left, and Chris Long sliced in unblocked from the offensive right (which makes sense as the line was pulling left), but Unger also stumbled over Gallery as he attempted to block DT Darell Scott, leaving both defenders unblocked.

Mikell and Scott account for the tackle. Laurinaitis kind of jumps on as the whistle is blown and gets half a tackle for effort. Good defensive play, and no cuts Lynch could've made to save it.

Mikell had a really good game, by the way, especially considering the surrounding mess.

Seahawks go right back to 22. The difference between enforcing your will and pigheadedness is paper thin. Again, Rams in zone, Mikell is in the box, but this time the Rams are cheating to the offensive left, expecting exactly the same play.

The line pulls right. The cornerback on the right side is basically a free player as he's covering an empty zone, but Michael Robinson takes him out. DT Justin Bannan knifes through the offensive line unblocked which I have to assume is a communication error as either Unger or Jeanpierre should have picked him up. Indeed, Unger moves to block LB Poppinga in the second level, but Jeanpierre targets the same guy. Bannan doesn't really factor though, chasing Lynch from behind. Giacomini and Morrah on the right line up opposite Long.

Giacomini moves into the second level while Morrah chips, looks to release and then goes "wait, no one else is blocking this guy?" Another miscommunication. Giacomini moves to pick up Darian Stewart coming in from the deep safety spot and misses badly. Stewart stops Lynch dead and Long comes from behind to wrap him up.

There's your lowlights, and let's hope my bleak outlook turns out to be dead wrong tomorrow.