Share All sharing options for: The Seahawks' Top Five Defensive Plays For Week 15

In a game with five forced turnovers it's sort of easy to pick the five "top" defensive plays of the game. That said, for fun, I wanted to include a non-turnover defensive play that I thought showed some guile on the part of Chris Clemons and here it is.

The Seahawks run a zone blitz here with K.J. Wright rushing from the left side and Chris Clemons dropping into the flats to the right. Caleb Hanie underestimates Clemons' length here as he throws to Johnny Knox running a comeback route up the sideline. 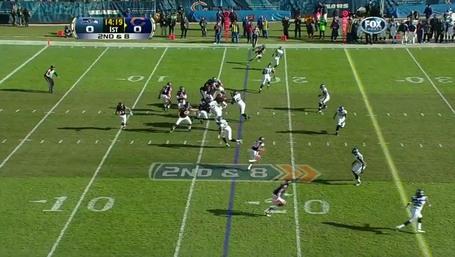 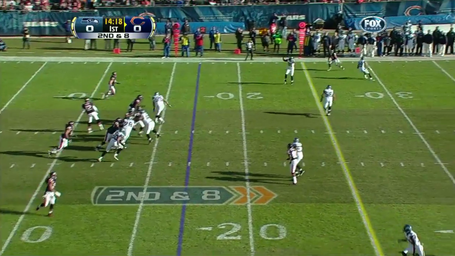 Clemons elevates and nearly picks off the pass. We saw Clem get an interception on Kyle Orton on a nearly identical play in the preseason at Denver, and this was ever so close. Another example of the athleticism and versatility Clemons brings, and this play got the Seahawks' defense off the field.

Ok, now on the the turnover plays...

This was actually a big play for the Bears, getting out of their end on 3rd down, but it was foiled in the end by Kam Chancellor, as he stripped Johnny Knox of the football, allowing Earl Thomas to recover. Unfortunately for Knox, he was hit in an awkward manner trying to recover his fumble and ended up with back surgery a day or two later. Was a scary situation and glad he's doing well out of surgery. 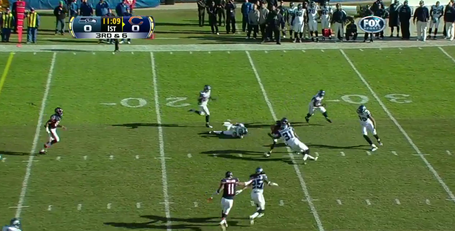 From a pure football standpoint though, a great play by Kam to get his hand on the ball and force it out. It looks like it would have been a 20 yard gain or so before the fumble, so good on Chancellor to make something happen.

Another really nice play by Chancellor. Kam started up near the line, shadowing tight end Kellen Davis, who was in an H-back look, offset from the line a bit. Davis releases and Chancellor runs with him beautifully, keeping his eyes in the backfield on Caleb Hanie and when Hanie releases the pass, Chancellor tracks it in easily.

The ball is tipped and in no manner, Earl Thomas watches it in over his shoulder all the way into the endzone. Nice play by the safety duo. 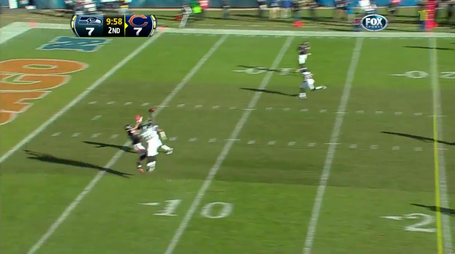 Then there was this. K.J. Wright actually said on an interview with the Calabro show the other day that he was supposed to be dropping back into zone coverage on this play but read the naked bootleg - nice instincts by the rookie and it paid off. As he rushed in, he made enough contact on Hanie to force an awful throw, right into Big Red Bryant's mitts.

via BigTrain21, the Gif Magician

Brandon Browner's pick wasn't overly impressive but how can you really exclude a pick-six from the top defensive plays competition??? Regardless, Browner followed Roy Williams on a slant route, Hanie threw it well behind Williams, and the rest is history.

The below still shows just before Browner is about to intercept the football. Just an awful throw, but I'll take it. 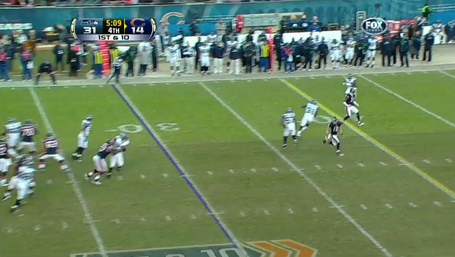