Hey guys. Rough week, eh? The worst of the season, in fact. The only way a nine-win week is palatable is knowing that everyone else in the country got the Packers and Colts games wrong too. The good news? As penance for misleading you so egregiously, I'll keep each preview to three sentences or fewer. The better news? We're still in the top 1% globally, according to ESPN, with 153 correct picks on the season. 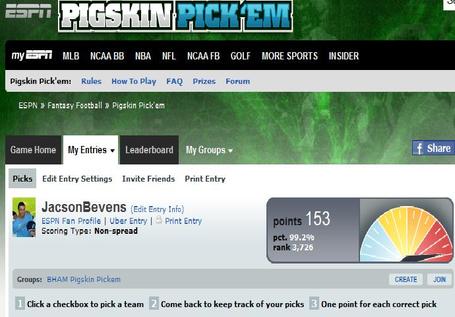 Click through to see the winners posted in 'breviated form

This game does look a little different after the Houston's winning streak died on the same day that Indianapolis' 92-game losing streak also ended. The line will probably be closer than it was a week ago, but Houston still has the number one rush offense and Indy still can't stop the run. Look for Arian Foster and Ben Tate to have excellent days. THE PICK: TEXANS

Denver showed last week that they can be beaten, and soundly at that, by a well-run spread offense. The Bills run a spread offense, just not well. CJ Spiller looked great last week, but the Broncos backs will look better against Buffalo's chimeric defense. THE PICK: BRONCOS

You know that feeling you have about the Seahawks right now? That nobody-thought-we'd-still-be-in-it-but-here-we-are feeling? Yeah, after winning six of their last seven, Cardinals fans have it too, and if this game were in Arizona, I'd choose them; in Cincy, however, I think the Bengals win a fairly low-scoring one. THE PICK: BENGALS

The Ravens are undefeated at home and that won't change against Cleveland. Baltimore is a team that will require home games to do much in the playoffs and beating the Browns is a key element to staving off the Steelers. I'm predicting big days for the following people: Haloti Ngata, Ray Lewis, Ed Reed, Ray Rice, Torrey Smith, and post-game bragadoccio from a team that just got housed by the Chargers. THE PICK: RAVENS

Tennessee may have left their playoff hopes inside of the egg they laid in Indianapolis last Sunday, but they're still the more talented team here. The interesting thisng will be seeing if they can corral Maurice Jones-Drew just six days after giving up 161 rushing yards to Donald Brown. I don't necessarily think they do, and as the Jags late-game pass defense is softer than a newborn's cranium, the Titans should be capable of putting this away. THE PICK: TITANS

This is pants down the hardest game of the week to call. Remember when the Raiders had the division locked up a few weeks ago? Well, their recent self-disembowling combined with the fact that they're traveling to Kansas City to play a team that looked fantastic against the Packers last week makes this one a lot more interesting than it looked a couple of weeks ago. If the Raiders can make this a high-scoring one, I think they do it, but I think the Chiefs ground them and force Raiders fans to start changing their tune about the Carson Palmer trade. THE PICK: CHIEFS

Bonus fourth sentence (sorry): screw the Raiders for last week -- all they needed to do was not be awful for five minutes and Seattle's playoff odds would be about quadrupled.

This game may be closer than originally anticipated if Charlie Batch is forced to start, but at least that would save us from having to hear the announcers gush about how tough and gritty Ben Roethlisberger is. I think Rashard Mendenhall eats real good in this one while Steven Jackson (who might be my favorite back in the league) starts to question all the little decisions that led to a career with the Rams. THE PICK: STEELERS

You'll hear a lot about how Tom Brady threw for 753 yards against the Dolphins in Week 1, but you'll also hear a lot about how Miami is a different team now than they were then. It's a true statement, as they've played fantastic football over the last two months and Reggie Bush has gone bonkers (406 rushing yards in last three games). That said, the 'Phins still lack anyone close to capable of slowing down the Pats' pass game. THE PICK: PATRIOTS

Adrian Peterson should be back to a full workload this week and although the Redskins handed Eli Manning his worst statistical performance of the year last week, that had more to do with drops and penalties than with any great play by the 'Skins. The only way Minnesota's atrocious pass defense can hang around is if they're given a an error-prone opposing QB. Enter Rex Grossman. THE PICK: VIKINGS

I still think the Giants are a better team than the Jets, although both teams have been difficult to figure out. The saving grace for the Jets' inconsistent offense the past couple of years has been their stingy run defense. Well, that's gone now and they lack the firepower to trade blows with a team that can score four touchdowns any given night like the Giants can. THE PICK: GIANTS

I'm predicting that Cam Newton will be on more season preview magazine covers than any other player in the NFL next year, and for good reason. On top of being a sensationally exciting player, the Panthers are starting to figure things out and will be everyone's sweetheart playoff pick next year. I say the hype train continues against the team that's playing worse than everyone else right now. THE PICK: PANTHERS

I promise I'm not betting with my heart here -- I think the way Philip Rivers and Co. have been playing lately makes them a better team than Detroit -- but pleasepleasepleasepleaseprettypleaseplease beat the Lions, Norv. I'll promise all never ask you for anything else again. THE PICK: CHARGERS

I've said it before, the Eagles and Chargers have been doppelgangers all season and they're both finding their highest gear in Decemeber. It may be too late for both of them, but I think wins this weekend keeps playoff talk for both teams alive. The Cowboys are still a good team, but I'm expecting a great Eagles team to show up, and Dallas can't go play for play with them if they do. THE PICK: EAGLES

I'm really glad that the Lions game starts at the same time as the Seahawks game; nothing would be a bigger buzzkill than having the stadium scoreboard show a Detroit victory before the game in Century Link even kicked off. That stadium is going to be so freaking awesome on Sunday and I think San Fran has a tough time overcoming that. I still they will though, and it breaks my heart. THE PICK: 49ers

My prediction for this one kind of hinges on whether the Niners win on Saturday. If they do, I say Green bay keeps the pedal pressed in order to secure home-field advantage and the Bears won't even be in shouting distance come fourth quarter time. If the Seahawks win, we may start to see Aaron Rodgers and the rest of the studs pulled early, but I'm banking on my last prediction being right and the Pack holding serve in Lambeau. THE PICK: PACKERS

What an awesome late season Monday night game! I love watching these two teams play football and I think Drew Brees is just the coolest. It's tempting to think that the defenses will just take the night off in this one, but both units have been playing much better of late and I won't be surprised to see a defensive stop decide this one. Also, prepare to see a half dozen replays of Mike Smith going for it on 4th down from his own 26 yard-line in OT the last time these two met. THE PICK: SAINTS

Consider these wins (besides that San Fran pick -- that one I hope I'm wrong on) my Christmas present to you all. I hope your holidays are the best you've ever had.