Share All sharing options for: K.J. Wright Making Plays in the Backfield

During training camp, the (supposed) impending breakout of Aaron Curry grabbed headlines and created excitement for Seahawks fans. Fast forward about four months and Aaron Curry is long gone, in a large part, because of the emergence of K.J. Wright. While Wright's coverage has been adequate, not great, he's been a major factor behind the line of scrimmage; seven of his 10 tackles for loss have come in past four games, including three against the Rams in Week 14.

In his Week 14 & 15 rookie report Derek Stephens, noted these three things, among others, when ranking Wright #1: 1) He's blitzing more, and the 'Hawks are utilizing his explosive first step to take more chances behind the line. 2) It's one thing to make a ton of tackles. It's another to make impact tackles, and the latter are what Wright is converting more of. 3) In terms of being in the right place at the right time, and when considering the discipline required to control the proper gaps from his position, Wright is the most consistent of the defensive rookies, and is showing zero regression from week to week.

While some may be surprised by his emergence, this is something the coaching staff believed was possible from very early on. Wright was drafted as an outside linebacker but he moved inside when Lofa Tatupu was released. In August Ken Norton Jr., "saw something that made him think Wright had, well, the right stuff. ‘Initially, in my conversations with him and with what he thinks he does best, I just felt it was worth a try...

He's only going to learn, and you know that he cares a whole lot about his reputation, about his performance. As a coach, that's all you can ask for, a guy that really cares and is very coachable. He's the type of player that listens and then knows how to transfer it to the field very quickly. When you think of all the great players, he has those intangibles. Now let's just see if it shows up on game day.''"

Wright's savvy and work ethic earned him an opening-day start at middle linebacker with David Hawthorne inactive. Hawthorne returned and the coaching staff realized Wright was consistently competing for playing time; he looked raw in Week 3, but showed enough promise and versatility that the Seahawks felt comfortable trading Curry during the bye, and moved Wright to starting strongside linebacker. Wright experienced some growing pains, notably in Week 9 against the Cowboys, but recently we've seen him make the types of plays that "forced" the coaching staff to give him a more prominent role.

On Monday's Brock and Salk show (with Dave Wyman subbing for Brock), Salk asked about Wright's ability to make plays on screens and "Nakeds" (bootlegs). Carroll responded; He is a very, very instinctive football player, the game comes really easy to K.J. Everything makes sense. When you tell him something and he gets it, he's got it for good. If he makes a mistake, its not happening again. He sees things as really good instinctive players do, while they are starting to develop, so he is a whole step ahead. He's learned so much football in such short time and he just has great savvy for the game and all, and its made him an exceptional rookie football player...he's all over the field, he's making plays and he's having a ball playing football."

The Seahawks are in a 3-4 look. Wright is circled. 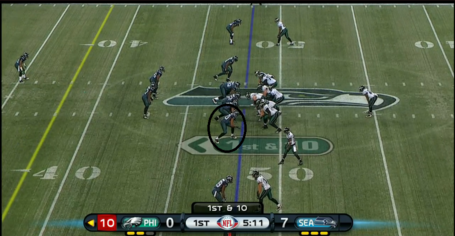 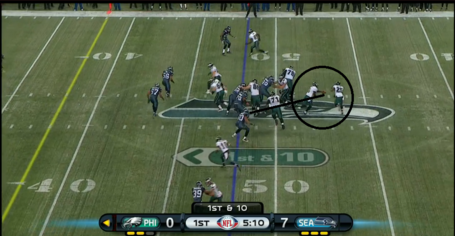 After the snap, Wright begins his pursuit but immediately his instincts and recognition skills come into play; he quickly stops to watch the quarterback/running back exchange. Wright knows the play will either continue down the line with LeSean McCoy or Vince Young will roll back into his area. Wright must figure this out as quickly as possible. 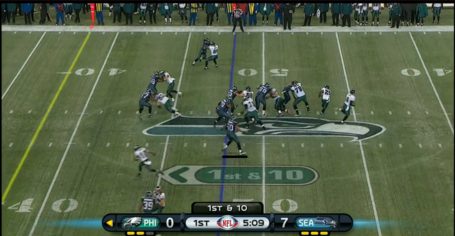 Wright quickly diagnoses right after the handoff, not biting on the play-action. Here you see Wright beginning his chase to the ball as the back-side contain. 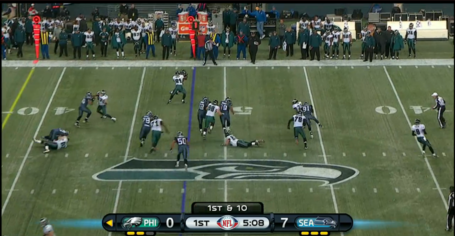 McCoy is able to get around Clemons on the edge... 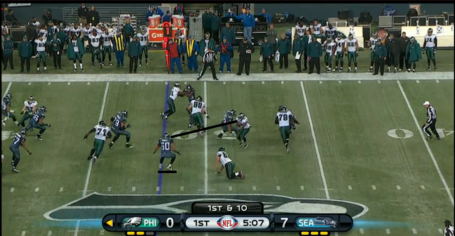 ...and then he cuts back inside of Alan Branch, who was pursuing down the line. Now it's Wright versus McCoy, and both men know it. Given McCoy's wayyyyy above average cutback ability, this is a 50-50 play; a big tackle by Wright or a gain for McCoy on a play that should have gone for nothing. 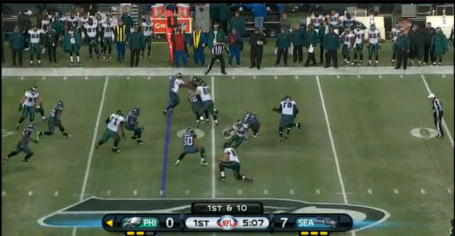 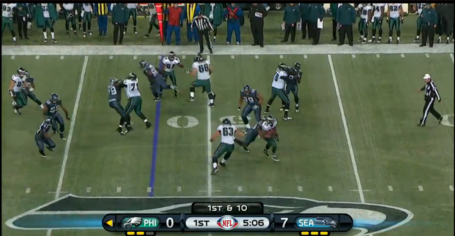 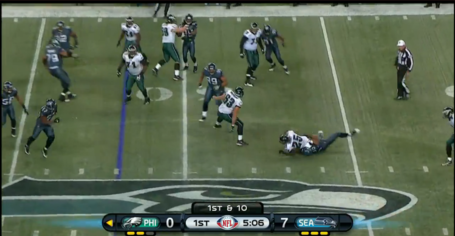 Wright's first step allows him to close down on McCoy, who tries to cut backwards and around his blocker that is on the ground. Wright goes for the wrap around the waist and pulls McCoy to the ground with ease. This is the type of play we've seen Aaron Curry make, but also mess up too many times by not wrapping or failing to contain.

Compared to Wright's gaffe in Week 9 when trying to tackle Demarco Murray along the sideline, this is a big improvement. Also, this play exemplifies Wright's football savvy; reading and reacting to the play action fake almost instantaneously, then making a strong play containing the back-side.

Danny noted earlier today that on the Bryant pick-six against Chicago, Wright broke his zone-coverage assignment because he read the naked bootleg; the resulting quarterback pressure caused the interception. Here we see that Wright has been making these types of read and react plays for weeks.

This is a screen pass that gets blown up by Wright (here is the Gif). Seattle comes out in a 4-3 with six men on the line, hence a 6-1. 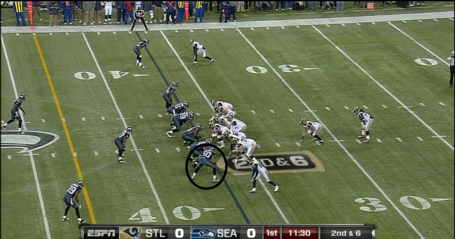 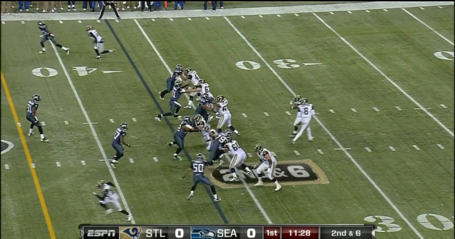 Off the snap Wright reads the play action and drops into coverage. 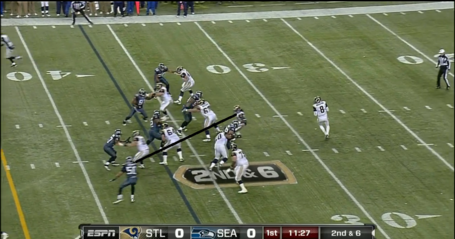 As Wright drops, his eyes are locked on Steven Jackson. Wright is already sniffing the play out... 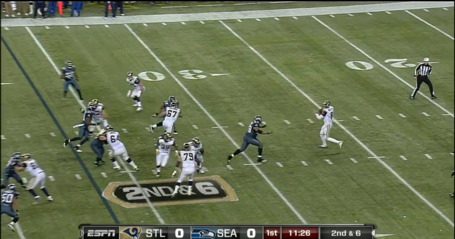 He drops another yard or two as the linemen release Bryant to the quarterback. Here, the play is clearly a screen and Wright (50) has already begun his pursuit towards the ball. 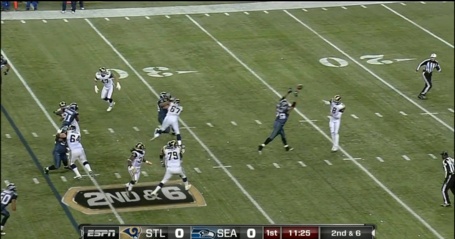 Check out Big Red in Bradford's face. He almost makes a play on the ball, but if nothing else makes this a tougher throw for Bradford. Notice that Wright is about four or five yards from Jackson at the moment and the linemen get tangled up. Wright has a clear path to the ball. 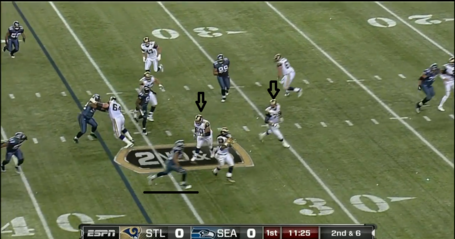 Jackson just caught the ball, and it's clear that Wright has rendered the linemen useless. It's all on K.J. to finish this off against the behemoth running back. 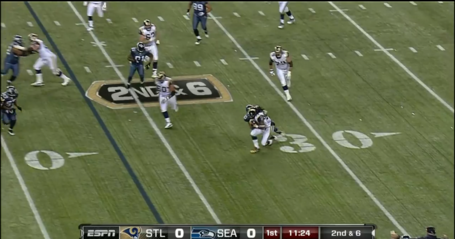 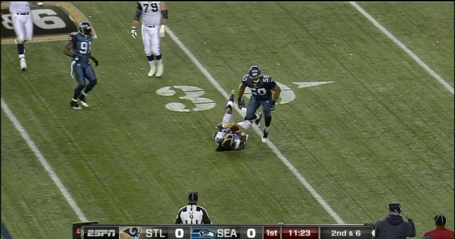 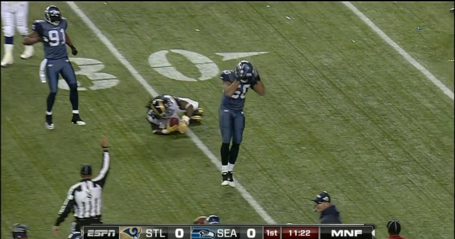 Boom! Wright not only hits Jackson right after contact; he drives him back a bit and to the ground. Then Wright gets up going bananas, and Clemons is on his way over to give some dap for slaying S-Jax in the open field. To sum up this play; recognition, instincts, quick reaction and sound tackling. A welcomed difference from the recent (prior to this season) struggles Seattle's had against the screen and a clear example of Stephens' notes about Wright's first step helping create impact tackles.

As Salk mentioned when talking to Carroll, Wright has been great against the screen. This is the second example from the past two weeks that shows Wright's prowess, but also a product of Wright being in the right place at the right time.

Here Seattle is in a 4-3, with Browner on the line to the top of the screen. Wright makes some sort of hand gesture before the snap; has he already sniffed the play out? 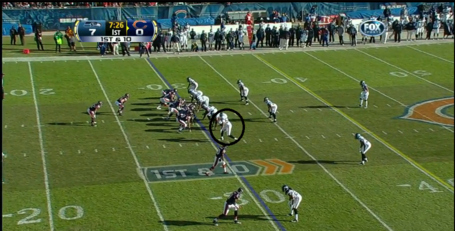 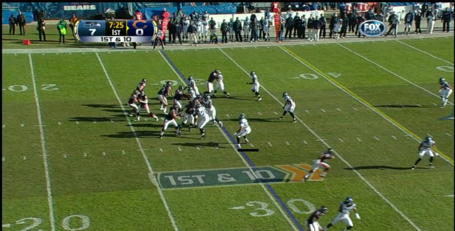 Wright is in no way fooled by the play action, which wasn't sold very well by Haine. 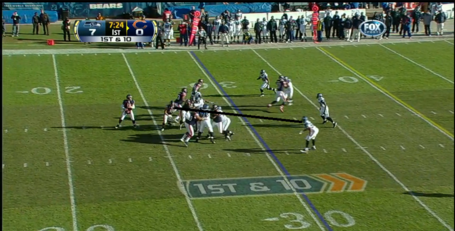 Two things stand out here to me. First, Wright has his eyes on running back Kahlil Bell, seemingly waiting for him to sneak out of the back field. Second, I thought this was a good example of Wright's lankiness and unique frame. His drop looks a bit awkward, but his fluidity helps negate any ill effects. 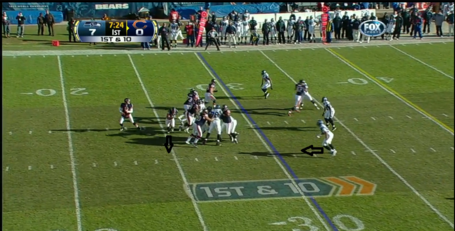 Bell begins to sneak out and Wright is already moving towards the line of scrimmage. Wright creates a bit of width, dropping outside the hashes, so he can have a clear lane to Bell once he's caught the ball (below). 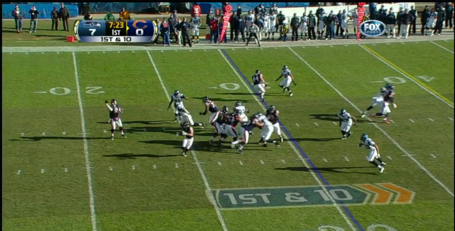 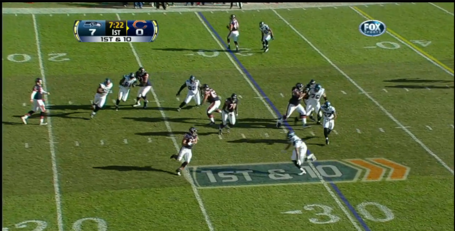 Wright has put himself in position to make the play, barring a successful juke from Bell. Unlike the tackle on Jackson where Wright goes high, check out how he handles the smaller, more slippery back. 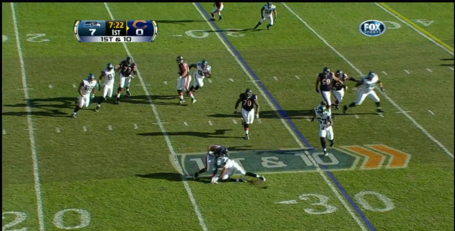 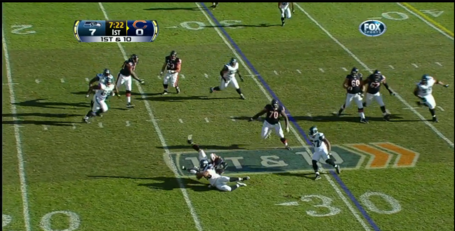 Wright goes low, engages a lower leg and flips Bell onto his back. (This is the picture at the top of the article.) 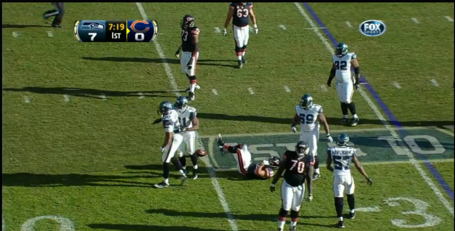 Wright pops up and flashes some more 'tude, and again we see Clemons come over to the rookie after the big play - a mentor perhaps? While Wright didn't do anything special, we see that he's capable of doing exactly what he's supposed to do, and well. All three ball carriers in these examples went straight to the ground, or even backwards, because of Wright's aggressive and sound pursuit.

After the Rams game I noted "I had Wright smack-dab in the middle of the 4th round on my Seahawks draft board last April. Given his value and improving play, he's definitely in the running for my favorite pick of the 2011 draft." His most recent performance against the Bears has heightened that feeling, a bit.

The front office was confident enough in Wright's ceiling to part ways with Curry, a move that many fans were hoping for, but only if there was someone who could adequately replace him. Wright has done just that, and more. He is a unique, smart linebacker that is currently fitting into the defense and he appears on track to have a bright future with this team.