Share All sharing options for: 49ers at Seahawks: San Francisco Preview with Screenshots!

So I know I'm not the X's and O's guy. Not even close. Danny, Thomas, and Charlie do plenty of that and to be honest, they know the intricacies of the game better than I do. I'm still hoping that they do some more posts where they teach people about the terminology and schemes, so that I don't have to straight up ask and look dumb, I can just read it and say "Oh yeah, DUH! What kind of a moron doesn't know that!" with such faux confidence.

I'm trying to learn more about the game so that I am more prepared and so that I look even smarter when I'm watching football with my friends. Though, they're impressed that I know who the starting quarterback of the Falcons is, and that's not very impressive.

No, I'm more of a "fan writer." I DO know a lot about football, about players, about the history of the NFL, about statistics. I've spent my whole life watching, reading about, and researching football. I want to make people laugh with my writing while also educating when possible. If my teachers could see me now... educating people. Let's just say I wasn't voted "Most Likely to Succeed" or "Most Likely to Ever Even Kind of Have Some Semblance of Success in His Long, Drab Life." Though it was very close to something like that.

I'm trying to better myself though. I'm trying to learn and try, or at least try to try, and be Mr. Smarty Pants. So I watched the Cardinals-49ers game from two weeks ago that Arizona won 21-19. I wanted to see how the Cards were able to beat them. What worked and what didn't. What can the Seahawks exploit? What will the Niners exploit?

Let me just tell you that the 49ers really blew this game. Just to give a brief summation before I get into screenshots and breaking down moments of the game, that the Niners played really well and should have won this game by three touchdowns. It's the same story as most of their week one game against Seattle. They failed to score in the red zone and settled for field goals. They played solid defense for 95% of the game and then all of a sudden have a complete breakdown and allow a long touchdown.

At one point, the Niners tried a fake field goal and it actually worked! But it was negated because Arizona threw a challenge flag on the previous play so the fake FG "never really happened." The funniest part is that the ref had to come out and say "The equipment isn't working. There is no challenge." David Akers missed the next field goal attempt and the Cards scored on the next play.

In the end, San Francisco couldn't put together a game-winning drive, though Ted Ginn, Jr. gave them a short field when they only needed a FG, but the Cards proved that their defense isn't too bad. The Cards also have explosive players that are able to keep them close in games that they might have no business winning. Something to remember for week 17.

Here are some very important moments and screenshots from the game that we will want to know about. Here goes nothing!

The Niners line up on offense to start the game. 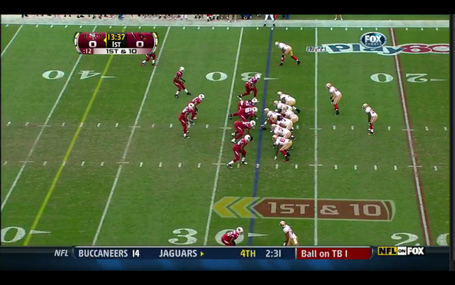 Now, I think you call this "offset I" because it looks like an I, but its somewhat off. They should call it "Lazy Eye" formation. What Arizona is doing is called "playing defense" and in a formation thats like a lot of guys close to the San Francisco guys but then two friends stay very close together in the second level.

This is called "Cute Defense" because it's cute that they are friends and that they will always be BFF's. If I were the coach, I would throw it to the guy at the top of the screen, because he looks pretty open. That dude is so far away from him on defense!

But he passes it to the running back. 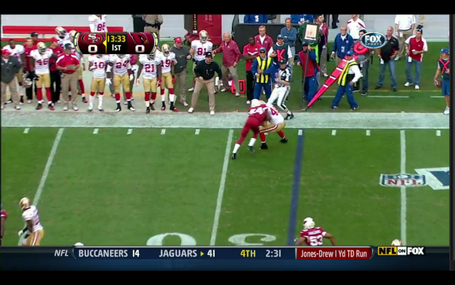 Dude, he didn't get very far at all! LOL! You won't get many points like that. We call it a "Silly Goose" play because they are such silly gooses for trying this. He doesn't get very far BUT the good news is that Maurice Jones-Drew scored on a 1 yard touchdown run in his own game. His mom is probably so proud of him! :)

This is interesting though: 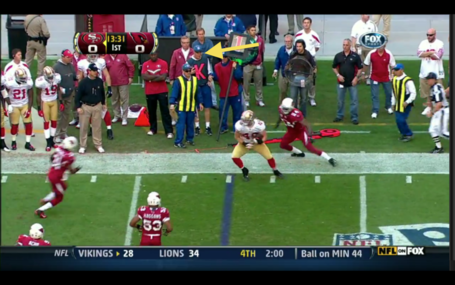 Look at the guy with the arrow on him. His name is Kevin and he is wearing a shirt with a "K" on it. He is just a huge fan of Alvin and the Chipmunks. He has seen Chipwrecked 7 times! There are also a lot of people just standing around. So many lazy people work in football. 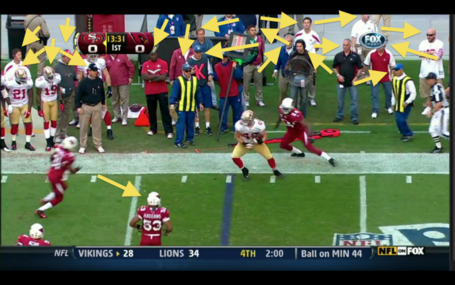 Next play is very important. Basically, we have to hope for a lot of things like the following tomorrow: 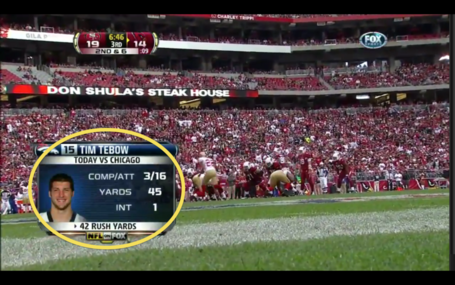 Notice what I circled. We need to have some distractions in case we are losing. Look at how Tim Tebow is sucking so badly in his game against the Bears that your eyes are focused on Tebow and not on the game. Its like "Hey, look at Tebow. RIGHT NOW!" even though the Cardinals are trying to mount a comeback at this point in the game. Later, Tebow would win that game against the Bears and be even MORE of a distraction. Let's hope we are so lucky.

Look even closer though. 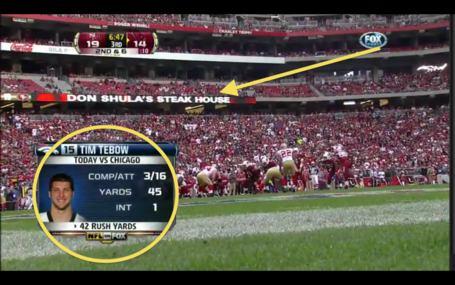 Don Shula has a steak house. I would like to eat there. Although, I don't know how important it is that it's owned by Don Shula, I want to try it out. I like steak. Hook it up Shula! 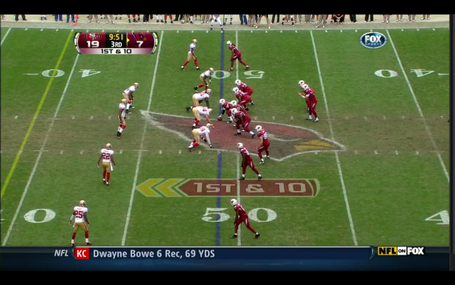 The Cards are lined up in what's called a "Three guys over here, one over there, and you stand next to me" formation. Larry Fitzgerald is all by himself and feels quite lonely. Before the play, he said a swear word and the coach told him to go stand by himself. His punishment wouldn't last long however. 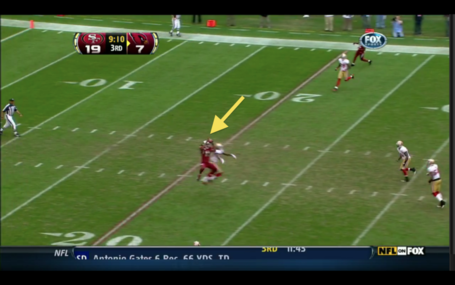 They pass it to him! Larry is able to break across the middle and then leap up for the grab while his defender is left helpless. There is NOBODY behind Fitzgerald and he runs the last twenty yards for the score as he gets behind the defense.

There is one definite way that the Hawks can exploit the Niners tomorrow on a play like this: Acquire Larry Fitzgerald. Notice where the arrow is pointing? We need that guy. The trade deadline has passed but if we plant drugs in Larry's locker, then the Cards MAY cut him and we MIGHT be able to sign him in time for the game on Saturday.

This would be CRITICAL to winning the game tomorrow. We need to get Larry Fitzgerald and time is running out. I'm not sure what the Seahawks are waiting for. Plant those drugs. Talk to Sam Hurd. Do something about it because the Niners have proven their weakness is facing Larry Fitzgerald. This is a play that we can execute if we have Fitzgerald, so let's make it happen in the next 12 hours.

Can't wait for this game tomorrow!

(Danny, Thomas, Charlie, others, please take this as a compliment that I can't do what you can do in breaking down game footage. It's impressive and I hope to be able to do similar things by next season. For now, this is what Kenneth can do.)