Breaking Down the Seahawks Opening Touchdown Drive Against the 49ers

Share All sharing options for: Breaking Down the Seahawks Opening Touchdown Drive Against the 49ers

The Seahawks opened the game on Saturday, after a little chippiness from the special teams unit on the kickoff, by setting the tone of the game with a 7-play, 80 yard touchdown drive to take a 7-0 lead on the visiting San Francisco 49ers.

Thomas Beekers said it perfectly at the time, noting then that the "49ers have no answer for the opening scripted drive. That's pretty wonderful."

It was pretty wonderful, and also makes for an interesting breakdown as (as Thomas mentioned) most, if not all, of these plays were carefully scripted in the week running up to the game and practiced in walk-throughs and pre-game meetings an innumerable amount of times. For the Seahawks to nearly perfectly execute that game plan against one of the top defenses in the NFL in a huge game with playoff implications, well, that's pretty nice to see.

The way they went about it, too, was interesting, eschewing the normal run hard then only pass if necessary type of offense, the Seahawks instead spread things out and passed the football on five of seven initial plays. This did a number of things, - first, it effectively knocked the wind out of the Niner run defense's sails -, had the Seahawks tried to run it early and often then failed, who knows what kind of momentum they'd have given their opponents. Doubt would set in for the Seahawks. More confidence would have been gained for the 49ers. Instead, by gashing the Niners several times through the air on the initial drive, the Seahawks essentially said with their opening volley, "if we can't run on you to win, we'll beat you through the air."

I believe I've read Davis Hsu elucidate this as well - the opening possession for the Seahawks is a very important one. You'll hear the words 'tone-setting' thrown out by me but I really believe that's what this type of drive does. When the Seahawks start slow, they START SLOW. If they have some success in the opening minutes, it's typically anothe story. Anyway, let's take a look at how it was scripted and how it went down.

Opening play, the run-heavy Seahawks offense spread it out and show an empty backfield, with Marshawn Lynch and Zach Miller set out on the right wing. Um, that's an interesting look, especially for the first play of the game. Announcer Charles Davis comments on this as well. 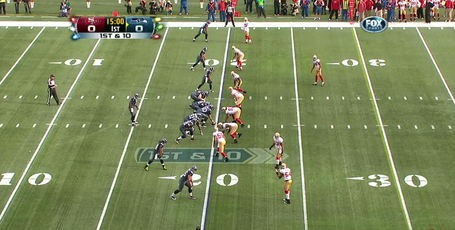 The play fails, - Doug Baldwin, in the left slot, runs a quick slant and drops a nicely placed ball from Tarvaris Jackson. That, my friends, is not going to happen very often.

2nd down. The Hawks go to their "12" personnel grouping with Marshawn Lynch in the backfield, and Cameron Morrah and Zach Miller as the tight ends. Golden Tate is out on the left wing and rookie UDFA Ricardo Lockette is out to the right.

Note - Pete Carroll mentioned Lockette several times over the week and apparently it wasn't just lip service. Credit to the Seahawks for getting him involved, - I'm actually a big fan of their ability to get their depth out on the field throwing Ricardo into the fire with a deep ball on the second snap of his first game is a hell of a way to introduce him to the NFL.

The play is fairly simple, use two tight ends and a running back to draw your linebackers and strong safeties' attentions then get your receivers in iso situations on the wing. In this case, S Dashon Goldson is actually pretty close on the throw but Lockette just has a step on him and Carlos Rodgers.

Ball is snapped, Lockette beats the press to the inside then fades toward the sideline. Tjack throws it up, with pressure in his face from Justin Smith, and perfectly leads Lockette on the pass.

Nice play by the rookie to reel it in but an even nicer throw by Tarvaris. Big pickup on 2nd down for 44 yards. Remember how I wrote that the explosive play was going to be integral to drive on this stiff 49er defense? Well, that's not rocket surgery when you're facing a team with San Francisco's run defense, but that this type of thing was scripted early was telling. That they could execute it, that was encouraging.

The Seahawks run Lynch on first and second down, Picking up a nice six yards and putting themselves in a manageable 3rd and four situation.

The Hawks line up in their "11" personnel grouping with TE Zach Miller way out to the right wing. He motions in prior to the snap and runs a slant route to the middle. The confusion that Golden Tate will create with his crossing route will be enough to free Miller up in the middle of the field.

Big third down play for a pickup of nine yards and a first down. Drive continues.

On first down, the Hawks line up in their "12" grouping but run Cameron Morrah far out left and Zach Miller out to the far right wing. Marshawn Lynch is the lone-back, with Golden Tate split right and Doug Baldwin in the slot.

Ball is snapped, Doug Baldwin runs a shallow out route and Cameron Morrah runs a deep nine route. This leaves Golden Tate running an eight-yard curl route to the right, right in the zone left vacated.

TJack hits Tate for an 8-yard pickup on first down. Note again that the Hawks are passing on first down here.

On second down, the Seahawks now on the San Francisco 13 yard line, they just run their patented swing screen to Doug Baldwin and he beats Dashon Goldson to the edge for the games first score. A thing of beauty. 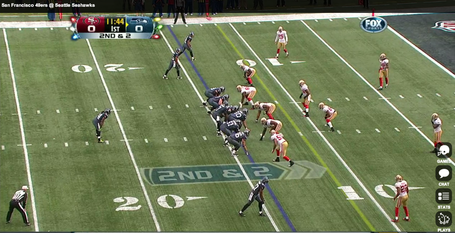 Overall, a supremely well executed drive, mixing a few runs, a deep shot, and some intermediate stuff to create a touchdown. Unfortunately this wasn't the story of the game - Marshawn Lynch was able to run fairly well in this one, but the passing offense wasn't able to muster the same kind of success throughout, which is a credit to the 49ers for their adjustment, especially in the third quarter.

Regardless, I liked the opening drive and initial gameplan and I was glad to see the Seahawks execute it so well.