Seahawks-49ers Review: A Closer Look At A Pivotal Third Quarter

Share All sharing options for: Seahawks-49ers Review: A Closer Look At A Pivotal Third Quarter

The Seahawks had themselves in a good position coming out of the Half with a 10-3 lead. They had an 18:10 to 11:15 time of possession advantage, had outgained the Niners 195-122, had won the field position game by forcing San Francisco to start, on average, from their own 16 yard line through four first half drives.

Some say that the momentum shift came on that botched 3rd and goal situation late in the 2nd quarter and some say it was the 49ers converted fourth down with 12:41 in the 3rd at Seattle's 40 yard line to keep their initial 2nd half drive alive that turned the tide. Either way, the Seahawks played an awful third quarter and ultimately it may have cost them the game, from a momentum standpoint and a 'finish them' mentality. Instead, they entered the fourth quarter trailing and reeling.

Several things contributed to the Seahawks yielding ten unanswered points in the third to squander their lead. Offensively, they didn't do themselves any favors by gaining exactly THIRTEEN YARDS, SIX NET YARDS IF YOU'RE COUNTING PENALTIES. Much has been made this season of the Seahawks as a second half team and I think that's largely been true and well-deserved. It, however, wasn't the case in this one. Advantage, extremely San Francisco.

The special teams units played poorly as well. Maybe I should have noted this before I included the offensive output numbers for the Seahawks in the third quarter, because it surely didn't help their efforts to be starting their first drive from their 15 (on a kickoff) and their second drive from their own 14 (on another kickoff). Starting from the 14, 15 yard line is understandable when you're talking about punts because generally speaking it's more common to get stuck in your own end by another teams' punt units. Kickoffs are another story, and it's fairly inexcusable for Leon to not even make it to the 20-yard line twice in a row on crucial drives.

Maybe (ok, probably) it's because of the new kickoff rules, but in prior years it was rare for a player to bring kickoffs out of the endzone when catching it 8, 9 yards deep. It's now become commonplace. 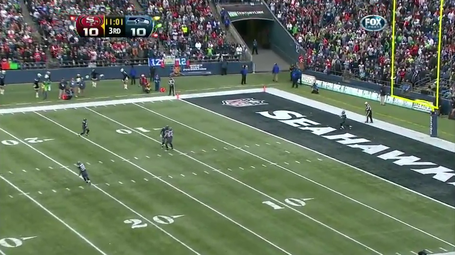 I'm not blaming Leon, necessarily, and Pete Carroll mentioned in his presser that Leon has a license to kill more or less when it comes to bringing it out every time because of his big play potential. The big play is powerful. Leon is one of the best. That said, for whatever reason, the return teams were not at their best on Sunday, and were borderline awful in that third quarter.

Obviously, the point has to be made that San Francisco's special teams coverage is excellent, as is their return unit, and they proved that once again against the Seahawks when they returned a long, low trajectory Jon Ryan punt 36 yards to the Seahawks' 48 yard line to start their second drive after a Seahawks' quick three-and-out. Special teams advantage, very San Francisco.

The Seahawks' defense fared no better in the third. They gave up over 100 yards, were frequently gashed by the Niners rushing attack, and could not or would not guard Vernon Davis, who had two huge receptions for first downs, including that godawful fourth down situation.

Here was one sequence of plays that had me pulling my hair out.

This led, thankfully, to only a field goal, but can kind of give you a snapshot of what went wrong in the third quarter as things spiraled out of control.

Now, the good news. As we've seen this season, and what represents a marked improvement from last, the Seahawks didn't bow out despite, for lack of a better way of putting it, looking like sh*t in the third quarter. That, and despite doing absolutely nothing on offense and surrendering 10 points, they still only trailed by three going into the fourth. They fought, scraped, and persevered into the fourth quarter, even recapturing the lead until the 3:01 mark. Even after going down again late, they put themselves in a position to win the game on their final two drives before coming up short. Now, obviously they couldn't execute that comeback, but it is encouraging to see them hang with a tough team in the fourth quarter.