Share All sharing options for: The Seahawks' Top Five Defensive Plays For Week 16

As I was watching this game, looking for some standout defensive plays to highlight, it struck me how few 'big plays' there actually were, on either side. When you've got two teams like this - San Francisco actually leads the NFL in turnover ratio at +26 and Seattle isn't that far behind, at 5th with +7 - both built upon the run and philosophically allergic to turnovers, the end result was fairly vanilla scheming, not a lot of chances being taken, and basically just a bunch of slogging and moving of the chains.

That said, I tried to pick out a few plays that stood out, and for the purists out there that don't count special teams in among 'defense' (ok, I don't think anyone does, but that's ok too), apologies for including one of the biggest plays of the game in there, a blocked punt by Heath Farwell. (Just as a little aside, boy that Heath Farwell signing sure worked out huh?)

Let's get into it.

As Greg Cosell noted in his game analysis, the "Seahawks at times matched up to 49ers "12" personnel with "big nickel" personnel - 3 safeties; Bigby was the 3rd safety, S Chancellor aligned at LB." This is an example of that - with the 49ers heavy use of two-tight end sets (sound familiar?) the Seahawks countered a few times by substituting Atari Bigby in for K.J. Wright, and moving Chancellor in to Wright's strongside linebacker spot to matchup with Vernon Davis. Davis, and as Thomas noted earlier, many teams with two tight end sets, present matchup issues for defenses as tight ends become more athletic, big, fast, and versatile. Davis is probably one of the fastest players on the 49ers team at 6'3, 250, so putting Kam on him makes sense. Nothing against Wright or Leroy Hill, but that's a poor matchup for the Hawks.

Regardless, you now see Bigby, Chancellor and Earl Thomas as safeties in what's referred to as "big nickel". The Niners are in their '12' with tight ends Vernon Davis and Delanie Walker aligned left. Kyle Williams motions to the right in what looks like an end-around and Alex Smith hands off to Frank Gore. His running route is indicated with arrows. I've also put an arrow to Atari Bigby, at strong safety. 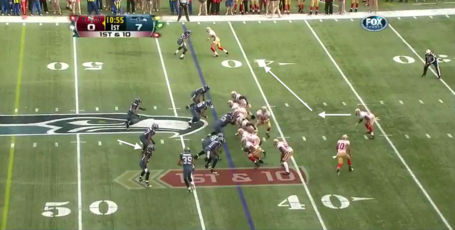 Brandon Browner follows Williams across the formation, below. TE Walker pulls to the right to lead block. 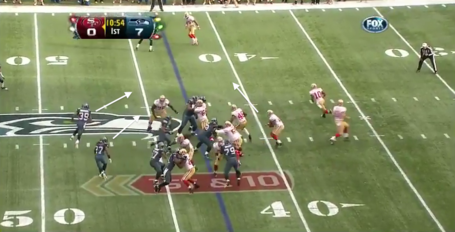 As you can see below, the Niners look to have something developing on the stretch play. Williams will look to block Browner, and if Gore can get outside Richard Sherman he's got some running room. Earl Thomas backs off in case this happens.

That leaves the opposite side safety, Atari Bigby, as he pursues Gore behind the line. 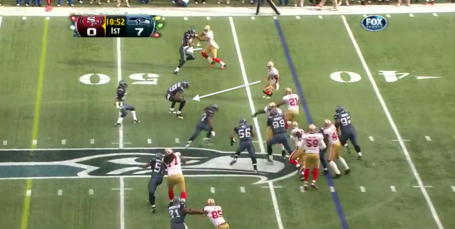 Bigby, as shown below, makes a superb tackle after reading the play like a book, and his quick reaction likely saved what looked to be possibly a big(ish) gain for Gore, who has speed and power and isn't the easiest guy to bring down when he's applying a stiff arm getting to the outside. 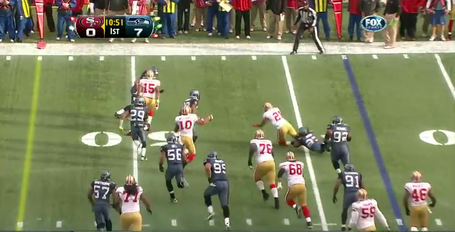 This next play was just a nice pass rush by LB Leroy Hill. Hill rushes in on a slightly delayed blitz, hits San Francisco's right guard hard enough to push him into the pocket, and Smith had by that point made the mistake of stepping into it.

This play wasn't spectacular but it did save a sure touchdown pass to Vernon Davis. Earl bats down a pass on 2nd and goal, forcing the Niners into 3rd and a long 8 yards to goal. Naturally, the Niners played it conservatively and the Seahawks held them to a field goal. 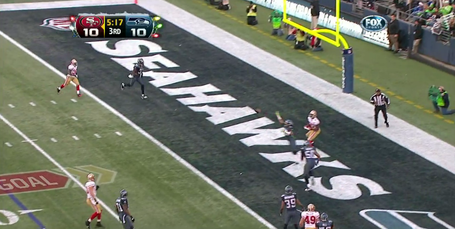 A nice play by the rookie cornerback. Matched up against Kyle Williams, Sherman makes a nice jam/reroute, disrupts the timing a bit, then comes over the top to knock down the pass from Alex Smith on third down, forcing a SF punt. Pretty textbook. 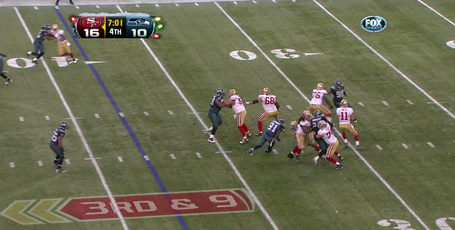 Heath Farwell blocks a punt that leads to Marshawn Lynch's touchdown run. Huge, momentum shifting play and I can't simply ignore it, even if it's a special teams play.