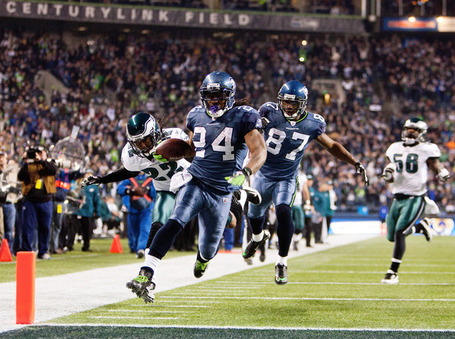 Many people have the same account with near-death expereinces, they all talk about seeing the light. Well after the Seahawks own brush with playoff death, they now see the light. The biggest problem is that even one loss could crush that light and leave them in limbo until next season.

The Seahawks first have to handle their business. There are two general scenarios that are still possible for the Seahawks to get to the playoffs. The first scenario would require the Seahawks to win out and end up going 9-7.

Surprisingly, it looks like this could possibly happen, as the Seahawks would be 8-4 in the conference, and this would be the best 9-7 tie break. This beats the Lions head to head, and wins ALL three-team scenarios, except one [Falcons, Seahawks and Cowboys (assuming not division winner) all 9-7]. In essence, in this scenario, the Seahawks have already entered the win-or-go-home phase.

Monday night Seattle faces the Rams, and on prime time the Seahawks shine. It is also a home game so expect the CLink to be a top-volume, earthquake-making playoff atmosphere. After that they face the Bears, who just lost their starting QB in Jay Cutler, and now it looks like their only other weapon on offense, Matt Forte could be out as well. This looked like one of the harder games of the season, even being in Chicago, but with the two critical injuries, I dont know if the Bears have any bite left.

The 49ers game is critical to the Seahawks season. Seattle will need to win that game. Luckily for the Hawks its at home, and they play better here. Finally, they finish up in Arizona. Believe it or not, that last game has the slim chance to be a play off spot game for both teams, very similar to last year.

Here is how it stands:

What needs to happen:

The Seahawks win out. That eliminates all possible 8-8 teams from competition for the playoff spot (though its possible Seahawks could be 5th seed and an 8-8 team could be 6th seed - Arizona, Carolina, Bucs, Eagles and Redskins).

This leaves the Cowboys, the Giants, the Bears, the Lions, the Falcons, and the Seahawks that can reach 9-7. This is where the complicated part comes in. One of the three remaining playoff spots goes to the NFC East (Giants and Cowboys still play each other twice).

So, we beat Giants, Bears and Lions, and lose to Falcons and Cowboys.

Seahawks win all of these scenarios unless the Falcons, Cowboys, and Seahawks end up tied.

Going into week 14 here is how you should root if you want the Seahawks to get to the playoffs.

Giants @ Cowboys: You want the Cowboys to win this game. It is easier for us to win tie breaks if Dallas wins the division.

Bears @ Broncos: Seahawks need Bears to lose here, so root for the Broncos.

Vikings @ Lions: Adrian Peterson should be back, and Suh is still suspended. Cheer for AP to get the rock and the Vikes to get the win.

49ers @ Cards: If the Cards win we get more insight on how to beat the 49ers, and could mean a 49ers - Seahawks first round match up; a 49ers win means we probably face Saints.

Falcons @ Carolina: Root for Carolina, could set us up for the 5th seed.

Rams @ Seawhawks: Scream your head off for Beast Mode and a 7 sack performance from Clemons.

After this weeks game, I will go over the 8-8 scenarios and update the playoff picture.