Earl Thomas on the 3rd Down, A-Gap, Safety Blitz

Share All sharing options for: Earl Thomas on the 3rd Down, A-Gap, Safety Blitz

Though Earl Thomas has not had a stand-out season from a statistics based perspective defending the pass, he has been registering big numbers around the line of scrimmage. Thomas has five tackles for loss - tied for second on the team with K.J. Wright and one behind team leader Brandon Mebane (6). Additionally, he's been a factor behind the line of scrimmage on plays where he doesn't make the tackle. His four QB pressures lead Seahawks' defensive backs (T7 for safety's in the NFL). He has one of the team's seven batted passes. He's the only member of the secondary to register a quarterback hit. Though, he does not have a piece of the defensive backfield's three sacks. On the whole, he's been the most "productive" secondary member in terms of harassing the quarterback. One of the more effective ways of doing so has been on an A-gap safety blitz.

Because Thomas isn't the biggest defensive back (listed at 5'10", 202) he's prone to getting knocked around a bit in the trenches. That said, he is an absolute kamikaze with admirable resilience; he's willing to get knocked down, and try again. I'm not advocating the over-use of this concept, one the Seahawks go with a couple of times a game, as this blitz is a call that exposes the backend in pass defense. However, his effectiveness on a well-timed, "third and pass" safety blitz is something that has stood out to me in person throughout the year.

Thomas' combination of compact size, agility and terrific speed allows him to sneak behind the rush and explode through the line, like a jack-in-the-box. Consequently, Thomas has cashed in on a few opportunities, helping the defense make big plays, and he's done it in each of the past two games. These are team first plays where Thomas is simply a factor, not necessarily the primary play maker.

Before we get to the recent examples, here is the play that initially struck me way back in Week 3. Oddly enough, Danny did a piece on Thomas and the blitz before Week 3 noting that the Seahawks may have to "dial" something up to get to Kevin Kolb, so I find this play well timed.

It's 3rd and 9 in Seahawks' territory. The defense has three linemen and six defensive backs. Thomas is circled. At the snap, he will start to rush. Also, all five defenders on the line of scrimmage pre-snap will rush the passer. 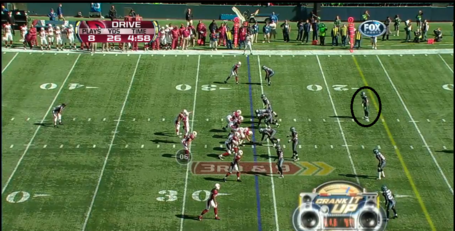 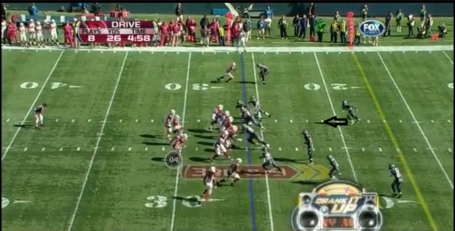 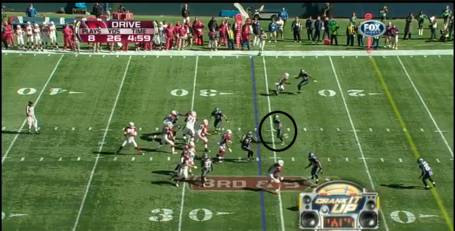 As Kolb drops back, you can see the offensive linemen start to pick up the rushers. The circled Thomas could have a clear shot to the quarterback, depending on who the lineman in front of him (the center) picks up. 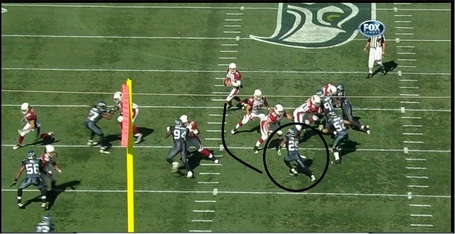 Here is another look at Thomas' path. Presumably, the center and fullback are responsible for picking up Thomas and Matt McCoy (#52). But this is where Thomas' speed and unique ability to play off of his teammates is a factor. Thomas initially rushes towards the overloaded side. The Cardinals have enough blockers, but Thomas' deception and the cutback into the A-gap is what makes this blitz work. 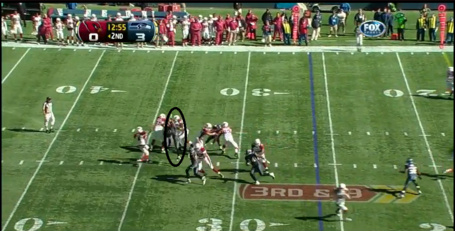 Thomas (circled) comes clean, now jack-in-the-boxing into Kolb's throwing lane. Notice a few yards in back of Thomas; the fullback slid to help the center double team McCoy, instead of sliding over to stop Thomas. 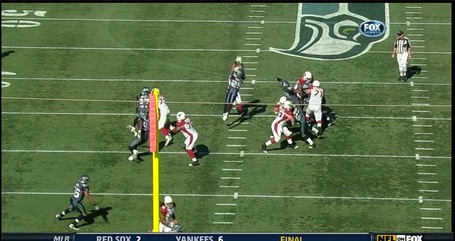 Here is another look. Four Cardinals are blocking three Seahawks on the right of the screen. Two lineman are in 1 on 1 with defenders on the left. All Thomas has to do is disrupt. 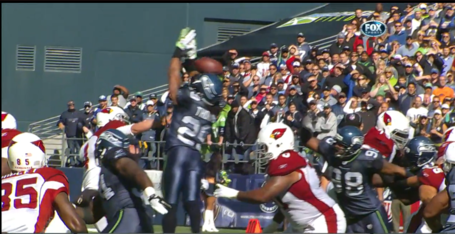 Thomas doesn't get his hands on the ball, as it deflects off of his helmet. In this case, that's enough to do the job and register the batted pass. The pass feel incomplete in an empty area of the field. There's the dial up, props to Danny.

Moving on to a few more recent examples; this next play is from Week 12 against the Redskins. This is a 3rd and 6, the ball on Washington's side of the field. Seattle is in nickel (one more down lineman, one less defensive back than the first play). 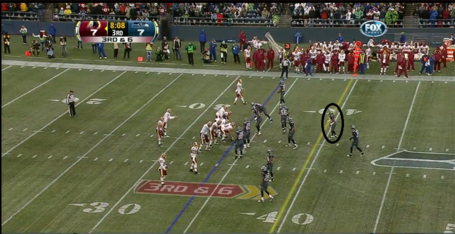 Tight end Fred Davis moves off the end of the line and motions in, stopping behind the center and ultimately setting up in the backfield to the quarterback's left (below). 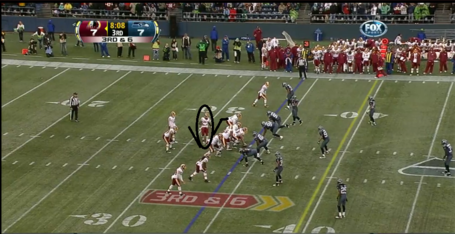 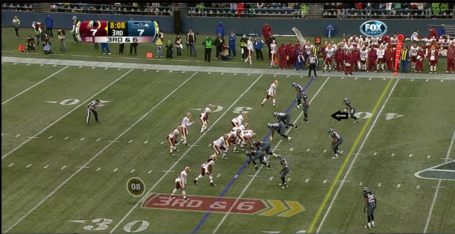 Thomas starts to come in before the snap. 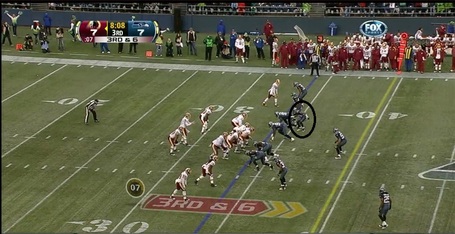 The ball is snapped. Dissimilar to the first play, Thomas is already at the line. Notice how he is low and positioned behind the soon-to-be rushing lineman; five players total rush on the play.

This next view is just after the snap. 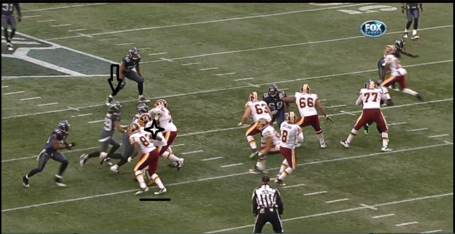 The arrow is on Thomas, who is beginning to loop inside - Roy Helu is setting up in front of Grossman, waiting to make the block. The underlined player is Davis, who steps up to take Clemons on the edge. The starred player is the left tackle; notice how he is turned towards the outside. This will keep him from eventually helping effectively against Anthony Hargrove, the rusher in front of Thomas. 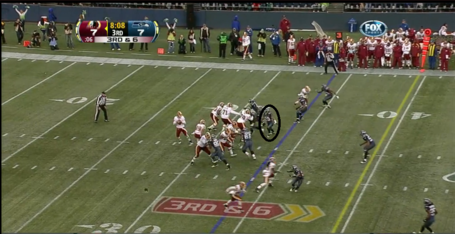 Another view with Thomas circled. 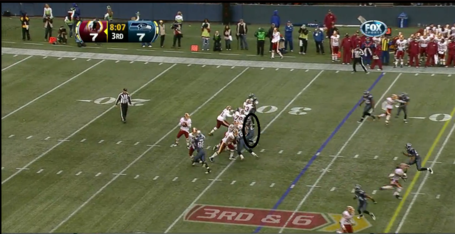 Thomas gets stonewalled by Helu. Unlike play one, the offense kept two players in to protect and it looks like it helped. Grossman will have time to throw. 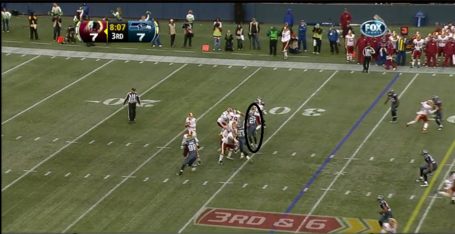 But again, Thomas disrupts the throwing lane in the middle by leaping. Though Grossman isn't looking that way (he's looking out to the right), Thomas is able to take away that side of the field. He's creating chaos up the middle; quarterback's don't like chaos in the middle. 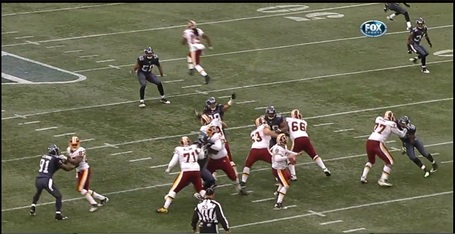 Here is another view. #71 is the tackle that was previously distracted by the blitz, which therefore left the guard mostly 1 on 1 with Hargrove. Here you see Hargrove bearing down on Grossman, fighting through the single team. 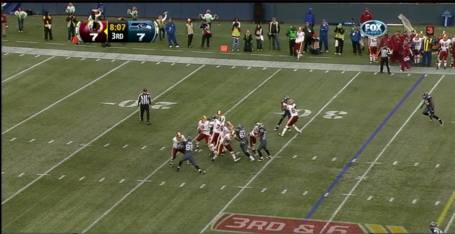 Hargrove collapses the pocket and Grossman goes down. Though Thomas doesn't make the play and is actually nowhere near the sack, he occupies two defenders. If Thomas doesn't catch the attention of the tackle, Hargrove likely faces the double team. Presumably, Helu still picks up Thomas and Grossman simply has a cleaner pocket to work from; maybe it's a sack. Right after that play happened I texted a friend "ET made that sack," as it was clear from my upper-deck seat that Thomas had a major role in creating that play. This is a play that won't show up on the stat sheet.

This final play, the Brandon Browner tipped pick from Week 13, intrigues me because I think it's an interesting example that highlights both the good and bad of a call like this. In real time, this was a complete bang-bang play; I wasn't sure how much of an effect Thomas had on the throw, or if the ball was catchable. After breaking it down, I can see how one could view this play with the glass half empty or half full. Anyway, on we go.

Seattle is in nickel with four lineman, similar to play two, on 3rd and 10. Unlike to the previous plays, there is only one blocker in the backfield. Thomas is circled, and he will creep in before the snap. The player behind him (Kam Chancellor) will drop, as will the corner on top (Richard Sherman). The two boxed linebackers (Hawthorne, Hill) will come up onto the line pre-snap, then blitz. 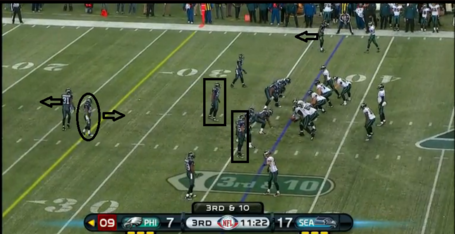 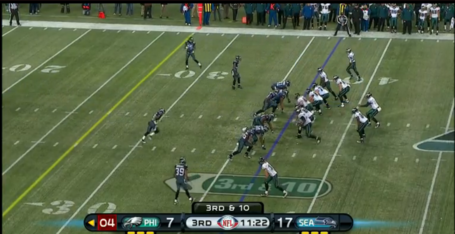 The pre-snap motion has occurred; this is at the snap. 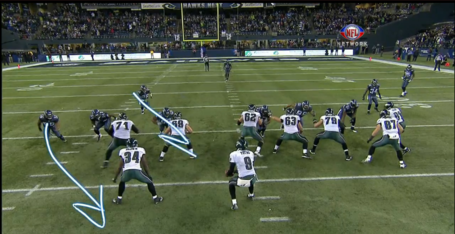 Here is the view just after the snap (the lines drawn by Mayock in the booth). Hawthorne's A-gap blitz has occupied the center - the second A-gap blitzer is a wrinkle we didn't see in the first examples - while Hill will occupy McCoy on the left side. This leaves Thomas free, as the Eagles' # 87 will not come back across to pick up the blitz. 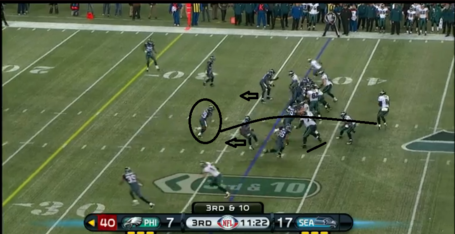 Trickeration; both defensive ends drop, as shown by the arrows, and this becomes a five man pressure, zone blitz. The tackle (underlined) gets caught in no man's land due to the blitz's design, but unlike the play above he recovers enough to help double team the defensive tackle. Hill's rush from the outside keeps McCoy out of Thomas' way. 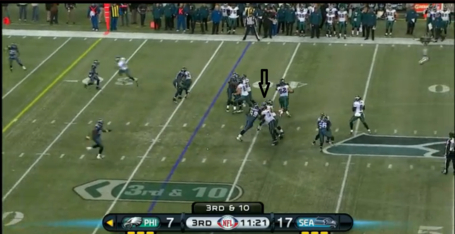 Thomas is hiding underneath the arrow. 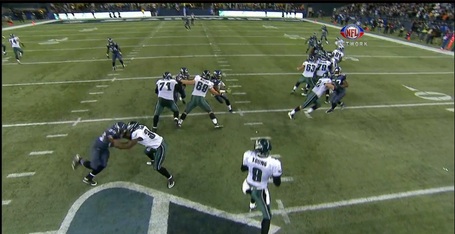 A better view of the play. Notice how the recovery by the tackle allows the left guard to at least try and re-direct Thomas. Meanwhile, Hill is bearing down on Young. At the same time, Young has identified the soft spot in the zone behind Hargrove. The open receiver on the top left is Riley Cooper. This is a timing route; an on-time, solid throw underneath the deep safety will get the first down. Check out the cut and separation created by Cooper (below). 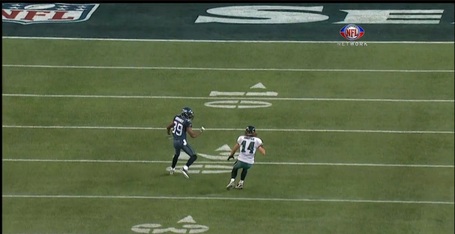 (Ball is released as Cooper makes the cut.) 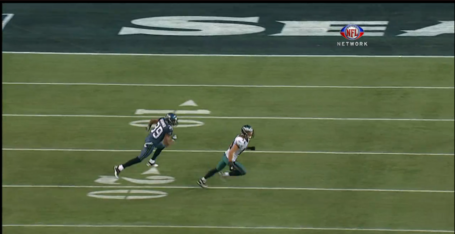 As I said, a good throw gets the first down. A good throw should basically be there by now. But this is where Thomas comes in... 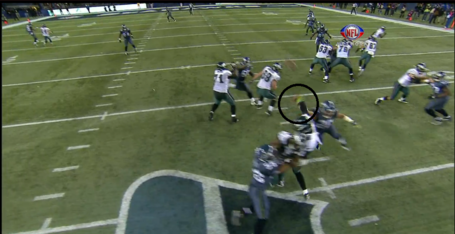 ...Literally. Hill pushes McCoy into Young and Thomas makes contact with Young's hand coming through. As you can see, Cooper has not yet come out of his break. This is where I think personal opinion becomes a factor. On one side of the coin, Thomas makes a good play by disrupting the timing of the play. On the other side, one could say Thomas should have been more disruptive or even gotten the half-sack. 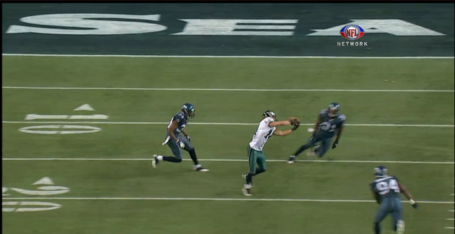 Young still makes an on-target throw, but it floats and wobbles just a bit. Enough so that Cooper can't hold on, a ball he arguably should have caught. 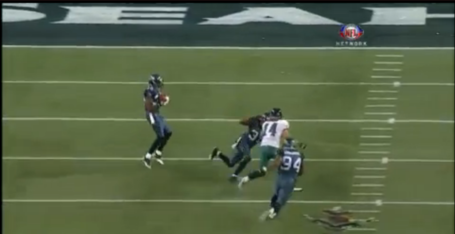 Instead, it bounces right into the arms of Brandon Browner. One could say this play was created by Thomas' tip and resulting disruption of the timing; or you could say Thomas didn't have enough of an effect and the result was merely the ball bouncing the right way at the right time. In this particular game of inches, the Seahawks win.

In looking at all three plays, Thomas could arguably make a more complete play in each scenario, but hes only 22. Last year Carroll referred to Thomas as a "neophyte" in a midseason press conference. When Carroll spoke about the similarities between Troy Polamalu and Thomas earlier this year before the game in Pittsburgh, Carroll equated Thomas to Troy in potential only, not as a finished product.

Obviously there is room for improvement and the expectation is that Thomas will grow, but the upside is Carroll and defensive coordinator Gus Bradley are finding ways to get Thomas involved in their pressure scheme early in his development. They are learning his strengths and weaknesses as more than just a deep safety, at times getting results, and figuring how to further unleash Thomas' versatility in the future. In my opinion, that's something to look at with the glass half full.