Share All sharing options for: Seahawks Top Five Defensive Plays of the Week

Alright, back tonight with the Top Five Defensive Plays of the Week as the Seahawks knocked off the Eagles in primetime. To start off - I wouldn't say this was the Seahawks' best defensive performance of the season, overall. The four interceptions were huge, yes, but the defense still gave up 5.3 yards per carry on the ground and over 200 yards through the air. They didn't particularly dominate and Vince Young didn't play particularly well. Ok, I've gotten that out of the way, and the Eagles are normally a damn good offensive team so I'll definitely take what we got on Thursday.

Now, there were quite a few great plays to choose from, (I almost dedicated this whole post to ridiculously high-degree of difficulty open-field tackles of Lesean McCoy by Earl Thomas) and here were a few (apart from ET's ridiculousness) that caught my eye.

As a quick aside - there was another Clemons' play that caught my eye as well, early in the third quarter where Clemons came across the formation on an Eagles stretch run play and caught Shady McCoy from behind, followed by his signature chin-strap-unsnapping celebration and compulsory in-Andy-Reid's-face taunt, probably something along the lines of "you shouldn't have traded me, sir".

Anyway. This play wasn't particularly flashy, but it showed how Chris Clemons is effective in the LEO role apart from just rushing the passer like a banshee.. The Eagles are going to run something that they tend to run quite well - a quick swing-pass screen, over to Desean Jackson that will be aided by pulling tight end Brent Celek, a couple of offensive linemen, and Jackson's wily shiftiness.

Upon the snap, Richard Sherman backs off of Jackson quickly, signaling a zone, apparently happy at this point in the game to just keep Jackson in front of him and limit the big play. The Hawks are up ten with 5:43 to go and by no means is this thing over. A score here by the Eagles would really put the Seahawks' backs to the wall in terms of finishing out the game with the lead.

See the assignments illustrated below. 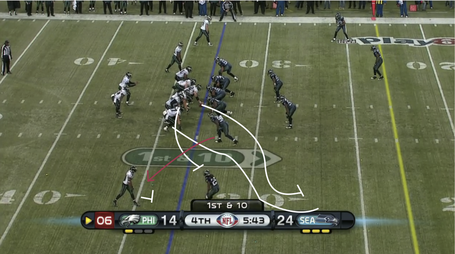 Below you can see the snap, with Shady staying in for pass protection, and the tight end to the right side of the field pulling downfield. On this particular snap, Clemons doesn't rush the passer, instead dropping into coverage of the releasing TE. This is very helpful for the Seahawks' defense here. (Can we be thankful for Gus Bradley here?!?)

Clemons sniffs out the swing pass almost instantly, breaking off and letting the TE, Brent Celek, run downfield. He makes a beeline for Jackson. I've shown arrows indicating that the Eagles have some good numbers downfield if Jackson is able to sneak past the Chris Clemons' onslaught.

He fails to do so. Clemons trips him up, just barely, and takes away what would have surely been a big gain, possibly even a touchdown. (Note all the green past Richard Sherman, who is getting effectively blocked by Celek).

Solid play by Clemons, as we've come to expect.

The Eagles ended up scoring a touchdown on this drive a few plays later, but Richard Sherman made a nice play on a poorly thrown ball by Vince Young here to prevent a score. The Seahawks were in a zone here to counter Philly's three wide receiver set. Jason Avant somehow managed to sneak towards the back corner of the endzone and Kam Chancellor had come up toward the line, perhaps fearful of LeSean McCoy out of the backfield. Sherman was out of position but managed to recover in time to knock down a slow, hanging pass by Young. 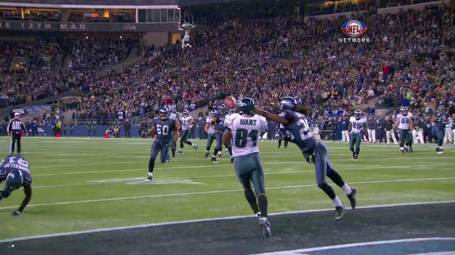 Want to know why I like this play? Look at Brandon Browner's head. 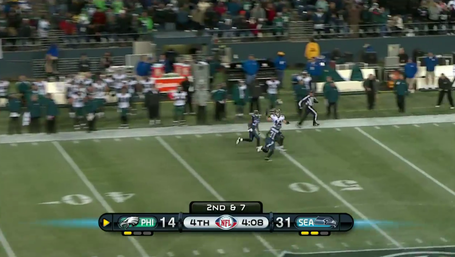 I don't really need to break down this play a whole lot. Hawthorne followed Shady out of the backfield and Vince Young simply threw a pass he shouldn't have. Props to Heater for picking it off, and props to Chris Clemons for making a block on Vince Young, the only guy that could have stopped the slow plodding middle linebacker from scoring.

K.J. Wright comes off the edge on this play out of the Seahawks 4-3 Under front. The Hawks did this look quite a bit last season, and Aaron Curry was the strongside backer in K.J.'s place, but the rookie makes a nice play, sacking Young and forcing a fumble (the Eagles recovered). 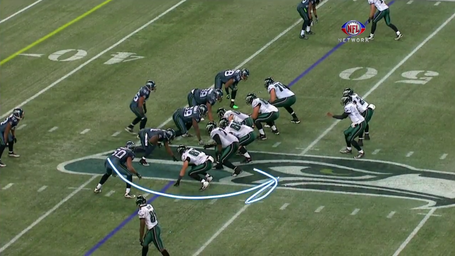 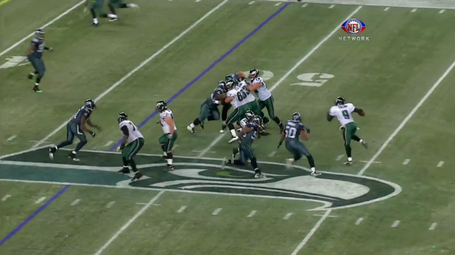