Share All sharing options for: Seahawks Vs. Rams Tickets: Pick Your Price Promotion

Hey, do you guys like watching football? Do you like going to Seahawks games? Do you like drinking beer and missing high fives with your friends and accidentally finding yourself watching the big screen instead of the actual playing field and seeing who raises the 12th man flag and smelling the fireworks and booing at people in Rams' jerseys and saying "oooooh snap, did you see that hit?" and bonding with your fellow man and woman by missing high fives with random strangers and wearing your Seahawks gear and getting all that Seahawks SWAG at the gate?

Well, the Hawks just so happen to have another primetime matchup coming up this week, as division-rival Rams come to Century LInk for nationally televised Monday Night Football. Want to do all that stuff I described (and more!) but want to save some money?

Our partners at TiqIQ have the hookup: here's another "Pick Your Price" opportunity. Make an offer around $65ea on two "3-star" tickets and you can save almost $50 off the total price of tickets + no service or shipping fees. Act fast because this offer ends on Friday at 9AM PST. 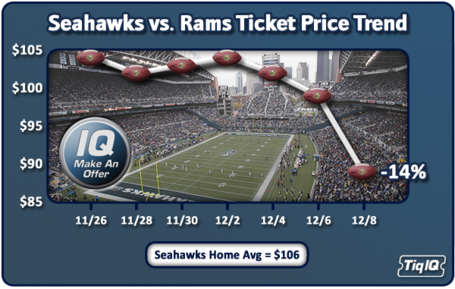