Tate breaks a weak jam attempt by Andre' Goodman. Eight yards into his route, he opens his shoulders towards Hasselbeck while continuing to run down the left sideline, telegraphing the pass. Tate waits for a floating pass, jumps, spins, receives. Goodman runs himself out of bounds. Tate cuts inside and begins to sprint across the field. D.J. Williams tracks him from behind, but Tate spins through Williams' tackle attempt and continues right and away from Renaldo Hill. He looks surprised by his own ability. Instead of running up field and towards the end zone, Tate takes jab steps up field while running primarily horizontally. That give Brian Dawkins time to catch up from behind, and Dawkins tackles Tate after a gain of 52.

The reception is both exciting and frustrating.

Screen attempt to Golden Tate that doesn't work and yet still succeeds. Tyler Polumbus is not fast enough into the left flat and Tate has to dodge Kevin Burnett almost immediately after receiving the pass. That slows everything down and allows the Chargers to rally and tackle. Apart from Polumbus, this could have been a solid play. At one point, Tate has four blockers, including an ardent John Carlson.

That put Seattle in third and long. Seattle converted. Golden Tate broke the jam attempt by Quentin Jammer (Tate was off the line of scrimmage, which helps) attained inside position and received and ran for 11 and the first.

Matt nearly Hasselsacked himself on the next play. He looked right, pumped right, looked off Forsett on the left, began to scramble, I began to clench my sphincter, but calmer heads prevailed. Hasselbeck found Tate on the left, well covered, but Golden one-handed the reception and put Seattle at the two.

This is an interesting play, because it's clearly a passing down and Hasselbeck is actually in shotgun, but the Raiders are still playing very close to the line. Nine are within five and the Raiders two deep safeties are exactly 10 yards away from the line of scrimmage. Oakland is set to defend the pass--the short pass. 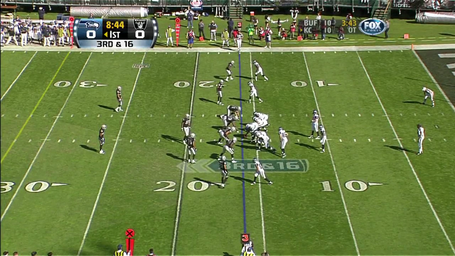 And that works, because Oakland's two safeties combine to stop Golden Tate.

First there's pressure, as Polumbus blows his block, but Hasselbeck steps up. Tate slows and waves open and Michael Huff closes on him from behind. Hasselbeck passes to Tate, Tate is able to spin through Huff's tackle and then continues up the right sideline. It almost works, but strong safety Tyvon Branch has the angle. He squares and contains Tate up the right sideline, waits for him to arrive and hits Tate and forces him out of bounds well short of the first.

Seahawks attempt a wide receiver screen and the play breaks down at three separate points. Antwan Applewhite rushes around right end and tips the pass. Donald Strickland sits on the route and closes on Branch as he's attempting to scoop the tumbling pass. Antoine Cason throws off a block attempt by Golden Tate and is free in the left flat. So you see, it didn't work.

Golden Tate receives on a slant and, for whatever reason we will never know, somersaults for his final yard. He stands, ball in hands, as an official shouts at him to hand it over. Tate's progress stops with 29 seconds left on the game clock and Seattle snaps and clocks the football with 19 seconds remaining. Tate may be a knucklehead but he didn't cost Seattle points.

Seahawks at Bears I

The first drive started with Marshawn Lynch battling Matt Toeaina in the backfield and wound down with back-to-back drops by John Carlson and Golden Tate.

Tate drops another pass, but this time, the suckiness of dropping the pass is a component of Tate's inability to gain separation. He runs up to and curls in front of Tillman and Tillman is on him like a DEA dog. Peanut closes and slaps it away incomplete.

Golden Tate is matched one-on-one against Jeremy Ware. Because pressure is pretty much never instantaneous, and a quarterback almost always has time to throw -- however much people want to warp reality to give the offensive line supernatural powers of failure -- Matt is able to loft it high towards Tate running up the right sideline. He throws flat footed, which is something I notice he does quite a bit, and it's a slow, hanging pass, but accurate. Tate high points it and receives but the heel of his left foot falls out of bounds as he lands. Incomplete.

Matt is pissed. Not to profile, but given the parties involved, I assume Tate ran the wrong route.

Raiders show blitz but rush only five. Seattle retains seven. Tate runs a curl in the right flat, and Hasselbeck targets as if throwing to a fade. It falls incomplete.

I am starting to understand why.

Hasselbeck takes the snap and looks left. He could probably pepper it in to Carlson. That looks like the best decision, but he's pretty locked on to Tate. He throws the fade, and it's not really a bad pass, but Carr wins position and Tate is forced into attempting something only Mike Williams and a handful of other receivers can do consistently: catch a pass over and in front of a defender.

He doesn't. Tate just doesn't have the reach. And the Seahawks turn the ball over on downs.

Outlook: This is not comprehensive. I have quite a few games to break down and provide notes for. Look for those next week. Luckily, Golden Tate wasn't very involved for most of the season, so an incomplete retrospective is appropriate.

Not involved, not active, not activated -- that is the shorthand summary of Tate's season. He was inactive in week one. He missed three weeks because of an ankle injury. He didn't see a snap against the Falcons. Tate wasn't technically "inactive" but he was bench bound.

Which isn't so bad, honestly. We knew Tate was raw, and though his rookie season was a disappointment, it wasn't damning. If you compare Tate to teammate Deon Butler, who turned 25 about a month ago, you can see the difference between disappointing and damning. Now, maybe Butler can turn his career around and become a valuable receiver, but he isn't struggling with recognition, route running or execution. In his short career, Butler has looked overmatched. He isn't promising but mistake prone. Butler looks finished, or polished if you'd rather.

Tate, by contrast, is more than two and half years younger. 125 of his 227 yards receiving were achieved through run after catch. The core abilities that made him intriguing translated to the NFL: quickness, coordination, ability to track the ball in flight, power, but he is frustratingly mistake prone. Tate was so mistake prone, it kept him off the field. If I remember correctly, his rate of blown assignments was something like one in four, as quoted by Carroll. That sloppiness permeated his play. Tate would sometimes run the wrong route. He seemed to have little situational awareness, as evidenced by his somersault against the Chargers. Tate was bumbling even in his finest moments. As a receiver, he is anathema to Matt Hasselbeck.

And, as-is, Tate is anathema to a successful passing attack. Rhythm, timing and spacing are factors in a single goal: completing a pass. Even if a receiver is the nth read, he needs to time his route, space it properly and be synchronized with his quarterback and the greater team. Tate doesn't do that so Tate doesn't see the field. Until he does, it doesn't matter how talented he is. However, young, talented and unrefined is a welcome change from surprisingly old and maxed out. Tate may never fulfill his potential, but he potential is thrilling.