Marshawn Lynch Retrospective Part I: Week 10 at the Arizona Cardinals

Share All sharing options for: Marshawn Lynch Retrospective Part I: Week 10 at the Arizona Cardinals

The first game I took a look at was Week 10, when the Hawks traveled to Arizona to take on the Cardinals. One of the knocks on Lynch is that he's poor at picking the hole to run through and he seeks out contact rather than trying to be elusive once past the line of scrimmage. I actually picked this game because it was a statistically poor game for Lynch - he ended up with 13 carries for 29 yards, 2.2 yards per carry, and a TD. He also caught 2 balls for 33 yards. I figured I would get a lot of chances to point out mistakes but generally didn't come out with much in that category - he missed one hole on a goal line play from what I could tell - but aside from that the line didn't afford him much. I took some notes below and included some screen shots of a few situations to illustrate.

(11:34 1st Q) (Shotgun) M.Lynch left tackle to ARZ 37 for 6 yards (P.Lenon, J.Porter). (2nd and 10)
Hawks in a 3WR set, Hasselbeck in the shotgun with Lynch to his left. Ball is snapped, it's a draw. Lynch runs off the left tackle Polumbus, who has done a good job opening up a lane. Arizona's safety steps into the hole created and Lynch does a nifty slip move to get past him. My first reaction here is to point out that he juked rather than just put his nose down and try to out physical the tackler, so that's encouraging. At the point of the juke he's about 2 yards past the line of scrimmage. Once he's slipped the first tackler, he makes a few more moves and dives forward for another 4 yards. A good solid run, beating several would be tacklers.

(10:22 1st Q) M.Lynch up the middle to ARZ 28 for -1 yards (C.Campbell). (1st and 10)
Hawks in a 2 WR, 2 TE set with Lynch the lone back. Ball is snapped and Polumbus doesn't get on his block quick enough. The D tackle hits Lynch behind the line for a loss of one. Not a whole lot Lynch could have done there to avoid the loss. 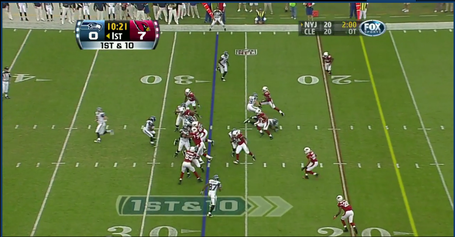 Not much a hole there as the DT has slipped his block, the DE(?) has contain, and the LB is there behind the line.

(8:36 1st Q) M.Hasselbeck pass short left to M.Lynch to ARZ 1 for 11 yards (P.Lenon). (1st and 10)
2 WR, 2 TE (overload right) set. Lynch the lone back again. The ball is snapped and Lynch releases to the left wing and Hasselbeck swings it over to him. For his part on the play, Mike Williams does a good job blocking his guy, and slowing up another two would be tacklers, allowing Lynch to run up the sideline, stutter, and push his way forward for 11 yards, down to the 1 yard line.

(7:48 1st Q) M.Lynch left tackle for 1 yard, TOUCHDOWN. (2nd and Goal)
Hawks in the I-formation with 3 TE, 2 of them overloaded to the right. John Carlson is the fullback and Lynch behind him. Ball is snapped, Carlson blocks the safety coming off the edge and Lynch powers through the line for the 1 yard TD. Pretty textbook power run off tackle. Spencer, Pitts, and Polumbus do a good job getting that initial push as well.

(4:35 1st Q) M.Lynch left tackle to SEA 3 for -1 yards (D.Williams). (2nd and 16)
Following a sack, the Hawks are backed up to their own 4 yard line. 2 TE balanced set, with 2 WR's in close to the ends. Lynch the lone back, the play is a run off tackle to the left with Polumbus pulling downfield and the TE Carlson left to block his spot. The play is blown up behind the line of scrimmage, with a gaggle of Cardinals descending on Lynch. Again, had no chance.

(1:08 1st Q) M.Lynch left tackle to SEA 19 for 3 yards (B.Robinson, A.Wilson). (2nd and 4)
A run up the gut that again gets blown up at the line of scrimmage, but Lynch does a good job slipping laterally to force a missed tackle, then pushing forward for a few more yards while being brought down by about 4 or 5 Cardinals. Good job by Lynch to slip the tackle on what would have been a loss of 4. 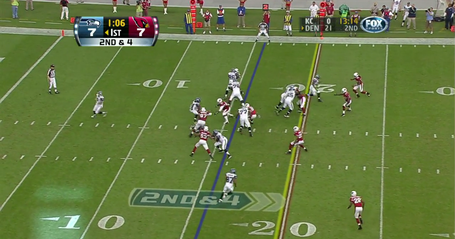 (13:51 3rd Q) C.Whitehurst pass short right to M.Lynch to ARZ 22 for 22 yards (D.Rodgers-Cromartie; M.Adams). (1st and 10) Whitehurst fakes the handoff, Lynch runs through the line and out to the right and Whitehurst checks it down to him, about 3 or 4 yards downfield. Lynch easily jukes the oncoming linebacker out of his shoes and begins rumbling downfield in that distinctive, almost bow-legged looking gait of his. He's deceptively fast for the way he runs, and he cuts back across the field to the left for another 18 yards or so, getting in his obligatory stiff arm at the end. 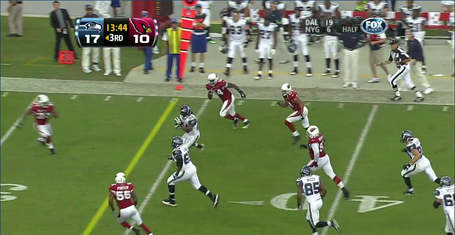 Surrounded by red jerseys but cuts back toward the middle of the field, avoiding contact. 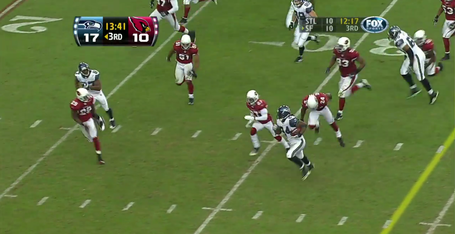 Moves back across the field. In this game he hasn't just haphazardly sought out contact.

(8:56 3rd Q) M.Lynch left tackle to ARZ 18 for 1 yard (A.Wilson). (1st and 10)
Hawks in a 2 WR, 2TE set with Lynch in the backfield. Ball is snapped and Arizona's Alan Branch gets through the line and forces Lynch to immediately change his direction (it's a run up the middle to the left). Lynch slips the tackle but by now is off balance so he basically stumbles forward for the yard. Again, the line fell apart and Lynch slipped a tackle, if he'd have kept his balance he may have gotten another yard but not much was there.

(4:00 3rd Q) M.Lynch left tackle to ARZ 16 for 1 yard (P.Lenon). (1st and 10)
Hawks in a 2 WR, 2 TE set again. Carlson in motion to the left. Ball is snapped and its another run off the left guard. The hole Lynch was meant to run through is filled nicely by the Cardinals middle linebacker so Lynch basically tries to draft off of Polumbus but this doesn't work at all. He gets one yard but in this case it looks like he might have been better to just take on the LB head on. TE Chris Baker double teamed the NT though and if he'd have sealed off the LB it may have gone for more yardage. 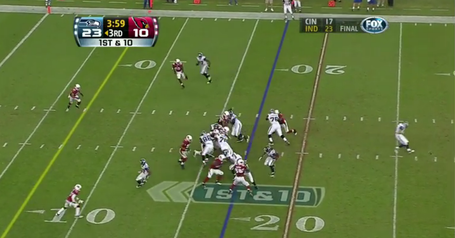 You can see the MLB stepping into the hole so Lynch tries to stay behind G Polumbus and the play stalls. You can also see Baker running past the MLB, not sure if he missed that or if he is doing his job.

Later in the 4th, 3 plays in a row, 1st, 2nd and 3rd down, on the 2 yard line, stuffed - 3 times in a row with the exact same play I described above that led to Lynch's first TD. Each play is blown up behind the line of scrimmage for the most part.

1st down - looks like Lynch gets in but called down at the 1. 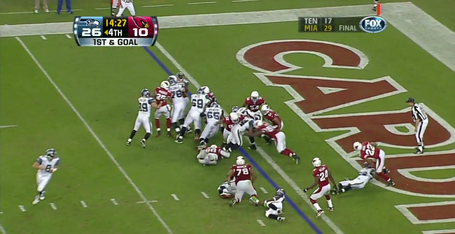 You can see Lynch trying to reach over the goal line - just came up short.

2nd down - it looks like Lynch gets in and all the linemen put up their arms in the Touchdown pose but it's called down at the one yard line.  I think Lynch got into the endzone but it's hard to tell. Maybe could have challenged it but most likely wouldn't have been overturned. 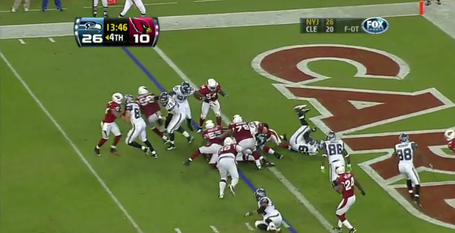 You can see Lynch's head there - he fell forward into the Endzone but they called him stopped at the one.

3rd down was stuffed, same play and on this particular play it looks like Lynch did in fact miss a hole. He tried to power it in straight forward but there was a bit of a hole to the left he may have been able to slip through. Instead he gets hit behind the line and knocked over.  They settle for a field goal in a game that's essentially over anyway, with the Hawks leading 26-10, but it's too bad Lynch missed his chance there. These goal line and short yardage plays are what baffle me about Lynch. He's a big bruising back but the Hawks did so poorly in those situations - surely some blame should fall on Lynch but in reality the lack of success has a lot to do the the surge the line can create - or lack thereof in the Hawks' case.

(6:50 4th Q) M.Lynch up the middle to ARZ 14 for 13 yards (K.Rhodes). (1st and 10)
This is an interesting play because of an interesting formation. The Hawks are in an I-formation with Lynch as the Fullback, Forsett behind him. I don't remember seeing this player combination all that much but I like it. The play is a fullback dive, in this case Lynch, and plays out to perfection. Pitts and Spencer do a great job of opening up a hole and Lynch hits it quickly. Guard Stacy Andrews has pulled downfield to block the middle linebacker and Lynch rumbles past him as well, skirting defenders and using his blocks, ultimately for 13 yards, breaking two or three more tackles for the final 3 yards or so. This is a play we see Michael Robinson do from time to time and the Hawks tended to do pretty well with it.

(4:48 4th Q) M.Lynch left tackle to ARZ 1 for 9 yards (C.Campbell). (1st and Goal)
Man, I love watching Lynch run. Hawks in a balanced 2 TE, 2 WR set. The ball is snapped and it looks like some sort of blown coverage because the Safety comes through the line without getting touched. And this is why I like Lynch - he makes one cut, breaks the tackle, gets to the outside to the left toward the sideline. He cuts back upfield two defenders have a good line on him. He fakes taking on the hit and jukes upfield, breaking two tackles and the way to scoring a touchdown. Except they call him out of bounds at the one, to which he politely disputes. It's really too bad, it looked like he was in. 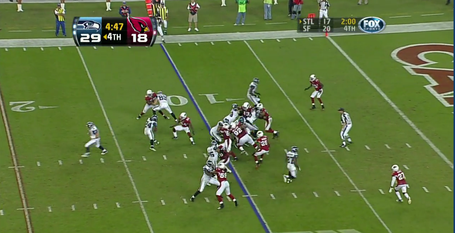 Lynch slips what should be a tackle by the safety behind the line. Again. He's very good at this. 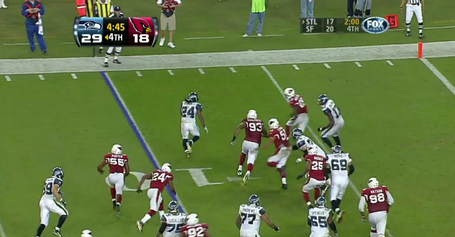 Makes his way upfield and is bottled up pretty well but slips three more guys there and ends up in the endzone but is called down/out of bounds at the 1.

The next play they give him the ball again but the sieve-like line forgets to block three Cardinals, who hit Lynch simultaneously behind the line for a 3 yard loss. 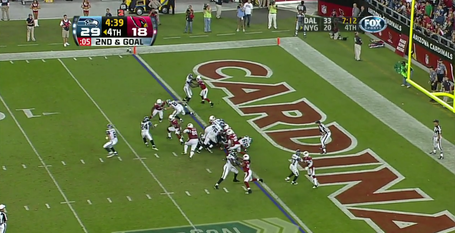 Not much blocking there.

End of Beastmode's day - it's too bad really, by all rights he should have had 3 TDs on the day, but was only given one by the officials.

Despite the numbers, I feel like Lynch played a very solid game. He averaged 2.2 yards per carry but the line play was terrible. It should be taken into account though that the starting lineup was Polumbus, Pitts, Spencer, Andrews, and Locklear - one of the many combinations of linemen we saw this year and one that had little success.

I'll be taking a look at a few more games over the next few weeks so stay tuned...