The other day I gave you some thoughts on Deon Butler and where he may fit in with the Pete Carroll/John Schneider regime. Because his main strength would appear to be his breakaway speed I would propose they use him to stretch the defense and get downfield in the manner DeSean Jackson and Mike Wallace are used. The Hawks offense never really took on a 'throw it deep to stretch the defense' identity last season for a number of reasons but I still believe Butler could manage that role and even thrive in it if the system worked a little better. I took a look at how he was used this year and took down some notes:

There are so many things I like about this play. First of all, it's on a first down. Second, it's on a no-huddle first down. I like the aggressiveness a lot. It's something that Pete Carroll always talks about and we saw glimpses of towards the end of the year but I'd personally like to see more of. Anyway.

Hawks in the shotgun, with BMW out right, Stokley slot right, and Butler flanker on the left. Ball on the Bears' 22 yard line. Butler runs an outside sideline route, beats the corner deep on a Hasselbeck pump fake, Hass throws a dime to him in the back of the endzone and Butler reels it in. Textbook route against a cover two to exploit the pocket between the safety and corner (in this case the safety was off galavanting about in the middle of the field). I like Butler in this role a lot. I don't like him as much in the slot, mostly because I don't think he's especially shifty or good in YAC. He is a speedy deep-ball threat, and that's why they drafted him. USE HIM LIKE THAT.

Butler started out the game with 3 or 4 little swing pass receptions - gained only a few yards on each. I don't like these plays much, but they seem to be a staple of Jeremy Bates' offense. Either way, nothing really of note until midway through the 2nd Quarter:

Hawks in a 2WR 2 TE set, with Butler in the slot, Ruvell Martin wide right. The ball is snapped to Hasselbeck, its a play action fake and Hass sees the pressure, steps up into the pocket, and hucks the ball downfield to a sprinting Butler on the deep crossing corner route. Butler has used his speed to get ahead of his defenders, but there are three guys shadowing him pretty closely. He makes the catch at the 22 yard line, runs to the left sideline, stops, his three defenders all overpursue towards the sideline, leaving the middle of the field open. Butler cuts back and goes to the middle of the field, beating the Cardinals' linebacker easily to the endzone. Less a great play by Bulter and more a comedy of errors by the Cards' defensive secondary. I will say though: Butler's speed is what made this play - first in creating separation on his deep crossing route, then beating the hapless defenders to the endzone. 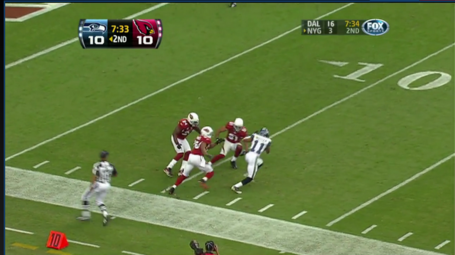 This is what it looked like as Butler ran to the sideline on this play. He stopped just short of going out of bounds, all three Cardinals overplayed him, and he cut back and up the field for a TD. Pretty funny actually.

Hawks in a 3 WR set, Hass in the gun. Butler far left, motions in a bit before the snap. He runs a fake drag, then curls back out toward the left sideline. Hass dumps it off to him and Bulter makes the catch about a yard short of the first down - and this is where his size makes him less of a weapon. He's immediately gobbled up by the safety and linebacker. A bigger player might have been able to muscle his way for the final yard but Bulter gets more or less arm tackled by the safety K.Rhodes.

He had no more receptions in that game - so to summarize, he had 3 catches for 3 yards, then 1 more catch for 66. This seems about right to me - Butler is less of a possession style receiver and should get yardage in big chunks. That's not a knock on him though - it's actually something that the Hawks need. They've got a possession style receiver in Mike Williams. Golden Tate and even Ben Obomanu can play the slot, Kris Durham is a big question mark and may be that deep threat but the learning curve will keep him out most likely for the most part.

I won't break it down as a play by play in this game - Butler finished with 4 catches for 43 yards, but there are a few things to note. Hass tried 3 deep throws to Butler in this game with no success. The first coming on a deep post route that was well covered by the safeties for Carolina. Hass threw it into coverage on a 3rd and long situation from his own 5 yard line - very ill advised and nearly picked off.

The 2nd attempt was a little more of the same- a deep sideline route that was covered by both the corner and the safety and Butler had no chance. The third came on another deep post route that was nearly intercepted and was thrown into double coverage again. I'll stop just short of blaming Hasselbeck for these throws - I'm not entirely sure if Bulter was where he was supposed to be on them - but nonetheless they were all nearly picked off and none came close to being receptions. It also should be noted that Butler appeared to get knocked off his route slightly on all three passes. I don't think he's the best at beating the jam and bump and run at this point. Something he'll have to get better at.

This is the game that he broke his leg.

Butler's game starts out mid first quarter with an ill-conceived end around that ends up with Butler about 5 yards behind the line-of-scrimmage and heavily covered. He salvages it by scooting around and diving forward for 2 yards.

Hawks in a 3WR, 2TE set with Butler lined up in the slot right. Butler runs a soft post vertical route and Hass throws it up for him. It's well defended and the safety is running step for step with Butler. When the ball is about halfway there, Butler extends his arm all the way, and shoves down the defender, then dives and misses the pass. It can be said that this was a smart play I guess - the odds of completion were pretty low considering the safety was right there - but to just blatantly shove him down when the ball was still a second or two away is pretty weird. At least wait till the ball is right on you and bear hug the guy or something so he doesn't intercept it. To just shove him over with a full-extension of your arms is ridiculous. The penalty is called and everyone in the stadium knows it's the right call. The announcers pick apart Butler at this point.

Butler lined up slot right and runs a deep out pattern. Hass just simply overthrows him out of bounds. Not a good day for Hasselbeck.

Hawks lined up in the offset I-formation. Butler out right and Ruvell Martin out left. Butler runs the deep vertical route and Hass throws it up to him. Butler manages to get behind the defenders enough and makes the catch as he's falling down. Overall a good play that comes much too late. Butler again shows his speed to get to where he needs to be.

Later in the game Butler would make his TD reception but break his leg in the process. As you can see he wasn't really used to exploit his speed on but a few plays. He was more used as a slot type receiver, and had marginal success. The inability to stretch the field was more a symptom of a broken offense - the running game never caught on, the passing game was sub-par, and the play calling was a bit conservative and head-scratching.

I'm still in Butler's corner for the most part - I don't believe that Carroll was just paying him lip service when he said he had improved. I think he'll make a full recovery despite the lockout - though maybe not before the season starts, which will hurt his development for this year. I think he's got a lot of potential to be a weapon for the Hawks, but they have to actually throw the ball deep for that to happen. Is he an effective slot receiver? Well, yes, I guess so. So is Brandon Stokley. Maybe Isaiah Stanback will be. Golden Tate has a lot of potential to be. He's competing at the moment as a vertical threat with Ben Obomanu, Kris Durham, and Dominique Edison. Obomanu is a solid guy but I'm not sure he's the answer in that role. Kris Durham might be good down the line but he's a rookie. Edison excites me as a deep threat and could be in the picture. We'll see what type of offense the Hawks roll out come September (I hope) but I'd love to see Butler beating the jam, streaking down the sideline or straight up the seam and catching some deep passes and not lined up in the slot catching two yard drags and swing passes.