Yesterday I talked about two and three tight end sets and how prevalent they are in the Seahawks' offense. Of course, last season an extra man was left on the line for blocking a lot of the time, but I think the Hawks also plan to use these sets in the passing game a lot as well moving forward. I wanted to point out a play and break it down to show you the practical use of two tight ends in the passing offense as used by the Seahawks.

I liked this play a lot. First, I like the uneven tight end sets because you can do a lot of things out of it with the talent the Seahawks have at the position. Second, it's easy to disguise the playcall when your 'offensive linemen' have the ability to run routes and catch passes. It makes it difficult for the defense to judge coming out of the huddle and can cause confusion in defensive responsibilities.

The Seahawks executed a brilliant play out of this formation in Week 10 vs Arizona and I wanted to break it down here. First, I'll set it up: The score is tied 7-7 at the onset of the 2nd quarter. Seahawks have the ball at their own 33 yard line and it's 1st and 10. Up until this point the Hawks hadn't really established their run game (weird I know) and the offense hadn't really started clicking on all cylinders. Sometimes to get yourself out of that funk a big play is the medicine. 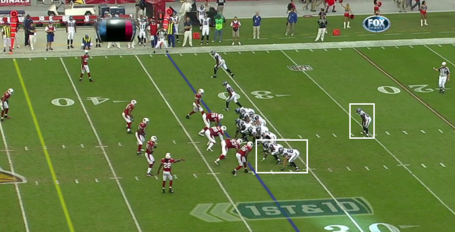 As you can see the Hawks are in a 2 WR, 2 TE, 1 RB set. Ben Obomanu is in the slot right, and Mike Williams is set out to the wing on that side. You can see #28, CB Greg Toler for the Cardinals at the bottom of your screen pointing and he appears to be sorting out coverage responsibilities with the safety, #24 Adrian Wilson next to him. Justin Forsett is in the backfield, with tight ends Chris Baker and John Carlson set in-line to the left. 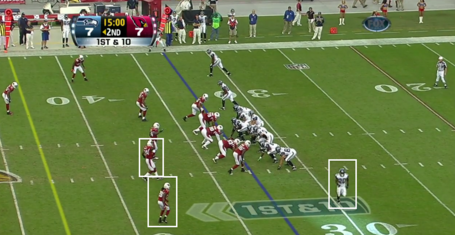 At this point Justin Forsett motions forward and to the left. Toler moves out to the wing to mark Forsett and safety Adrian Wilson starts barking orders; presumably assigning coverage responsibilities. There does appear to be a little bit of confusion on their part but since I wasn't there it's really hard to guess. Just before the snap, Wilson drops back about 5-8 yards and the Cardinals show what appears to be a version of a two-deep safety Cover-2 or Cover-4 quarters scheme. 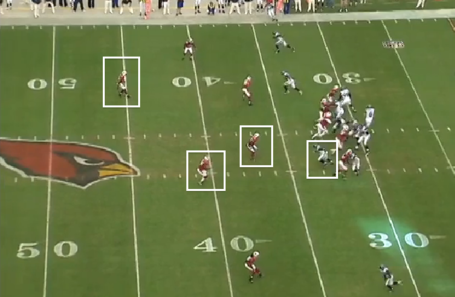 You can see the two safeties with boxes around them and MLB Gerald Hayes on Arizona's defense. To the right of the shot you can see Chris Baker get a good release from the inside tight-end position and Justin Forsett occupying Toler at the bottom of your screen. 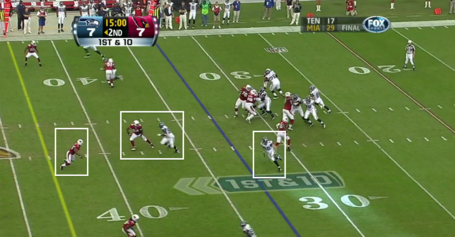 Forsett runs a vertical route and takes the complete attention of Greg Toler. As a quick aside, this play in particular is why you may hear me preaching the use of the H-back in the Seahawks arsenal. Though this particular play isn't schemed to target Forsett, he does have Toler on an island, one-on-one man coverage to the outside. If you're able to run with a guy like Jameson Konz, for example, here then you give yourself one more legitimate option on the outside and can really take advantage of the matchup. Konz is 6'3 235 and would be matched up against a team's number two (or worse) corner. To me, this just gives the Hawks another viable read down the field. Anyway, I digress.

Above you see Jon Carlson chip Joey Porter and get a good release down the field. Adrian Wilson bites hard on Carlson's route and that leaves Chris Baker matched up one-on-one with MLB Gerald Hayes with no help over the top; even more exciting is the fact that Baker has already got a full head of steam and Hayes is just turning his hips to run with him as the screenshot was taken above. 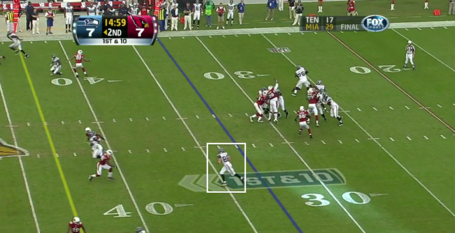 Above you see Carlson opening up underneath for Hasselbeck to make the read and because Wilson has dropped down to cover him up Hasselbeck throws a beauty over the top. 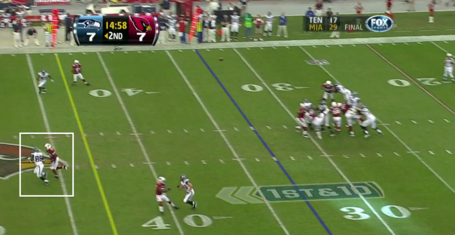 Timed well and with perfect fundamentals, Baker looks back after 15 yards and the ball is on its way. Hayes is beaten and for his part, at this point does the right thing by keeping his eyes on Baker in pursuit. Unfortunately for him the ball is on a dime and Baker reels it in. 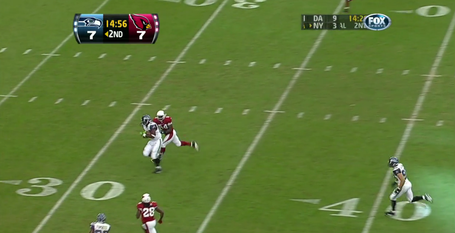 After making the catch Baker rumbles for another 15-20 yards while Hayes tries to bring him down. I love this playcall; 1st and 10, first play of the quarter. Catch them off guard with an unbalanced tight end set and motion the running back out to the wing to spread out the defense. Make the read and throw the pass. A thing of beauty. First down, momentum shift, confidence boosted.

Chris Baker has obviously been dropped from the team but the remaining tight end corps is strong and athletic. In this case I'd say the obvious replacement for Baker would be the 6'4 260 pound second year product out of USC, Anthony McCoy. Because McCoy is known for his blocking, you may see him in 2 TE sets staying on the line to pass protect in a lot of cases, but he has the athletic ability to really do some damage in the passing game. This type of play is exactly how I hope to see him used in 2011.

On the other hand you also have Cameron Morrah; at 6'3 250 he's got the speed and catching ability to provide a matchup nightmare when lined up against middle linebackers like we saw above. The combination of Jon Carlson, Cameron Morrah, Anthony McCoy, and even the theoretical idea that Jameson Konz could come out and run some routes as the H-back really gives the Seahawks some options to get creative in their offense. It will be fun to see how that shakes out in 2011.