The Replay Booth: The Value of a Dedicated Fullback

Share All sharing options for: The Replay Booth: The Value of a Dedicated Fullback

For those of you that are regular readers here you probably already know I've got a soft spot for the old-school, big, huge bruising fullbacks like Mack Strong and often will lament here on Field Gulls the fact that the Seahawks don't have anyone like that on the roster. They got by last season with the versatile and hard working Michael Robinson and to a lesser extent Jon Carlson at fullback but the short game suffered, and the running game in general was embarrassing - especially the power running game, in short yardage and goal line situations. I'm not writing this as an indictment of Michael Robinson because he did break Marshawn Lynch and Justin Forsett for some big runs this season and was an important part of the team in several functions, but in general I'd just like to see a guy that's bigger than 6'1 223 lead blocking for our running backs in short yardage situations.

I like to go back and re-watch games; I do a lot of rewinding and slow-mo'ing in an effort to better know our roster and to learn more about our schemes and as I was re-watching the playoff loss to the Bears today one play jumped out to me. Now, because I'm pointing this play out it sort of becomes, in my mind, a microcosm for our troubles in short yardage, 3rd downs, and goal line situations but really it's just one play that made me cringe.

Hawks lined up in an Offset-I, two back, two WR, one tight end set with Lynch the tailback and Michael Robinson the fullback. Here's how it looked: 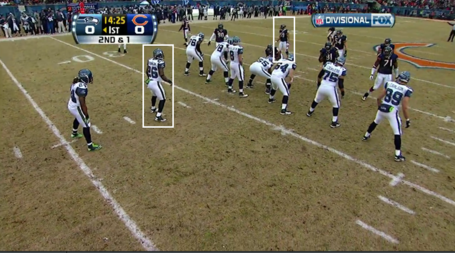 I've highlighted Michael Robinson here and on the defensive side Bears' OLB Pisa Tinoisamoa. For frame of reference, Robinson is 6'1, 223 and Tinoisamoa is 6'1, 230; relatively small for a linebacker but he does a good job filling a hole on this play. The run is to the left: OT Russell Okung will seal off the defensive end and G Tyler Polumbus will hesitate one second before picking up the middle linebacker Brian Urlacher. The Bears are expecting a run here and Tinoisamoa breaks downhill to fill the B gap quickly. It becomes Michael Robinson's job to neutralize him to spring Lynch for the first down, but the Bears weakside linebacker wins this battle mightily. 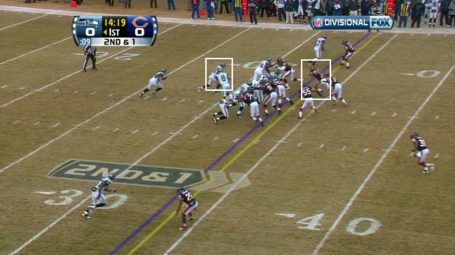 Above you see Robinson hustling toward the B gap to clear a lane for Lynch. I've placed a box around Tinoisamoa, who is streaking to fill the hole that Polumbus and Okung have created. Below you can see it a few frames later. 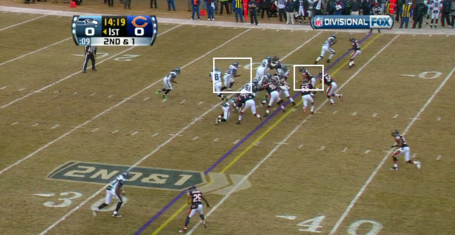 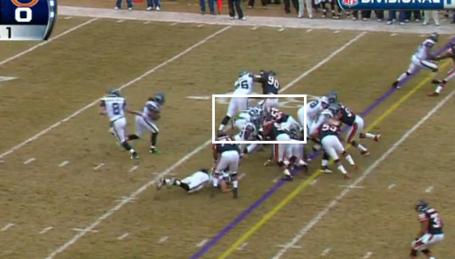 The Hawks have to get 1 yard on second down and the only thing standing in their way is Pisa Tinoisamoa. Polumbus does his part by hitting Urlacher in the mouth and now Robinson just has to either a) hit and seal Tinoisamoa one way or another to create a lane, or b) barrel through him and put him on his back. I prefer the latter but would take either.

Here's how it plays out: 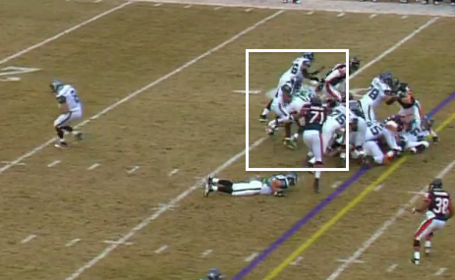 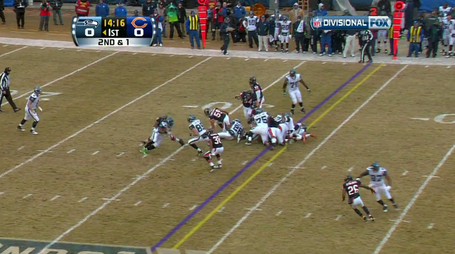 It's a little bit hard to see but basically Tinoisamoa hits Robinson, stops him in his tracks, knocking him backward and effectively plugging a big hole for our running back to run through for the first down. Lynch, expecting to hit the hole hard, barrels directly into Robinson's back and is stopped cold. He tries to bounce off him and back towards the middle of the field but at this point it's a broken play. John Carlson, who had just attempted a cut block and is laying on the ground, has now become Lynch's lead blocker to the middle of the field. It doesn't work very well that way.

Lynch is taken down for a loss of 2 yards, putting the Seahawks in a 3rd and 3 situation, punching the momentum in the other direction and pumping up the crowd. The next play the Hawks naturally abandon the idea of running the ball in short yardage and attempt a quick slant to Brandon Stokley ... but fail. They are forced to punt after having a 2nd and 1. Depressing and frustrating.

Two things to note after breaking down this play: One - I know I'm oversimplifying this. Two: I know I'm not giving Michael Robinson due credit for his body of work with the Seahawks this year, because he was very effective in certain roles.

But - all I want here is a 260-290 pound beast to knock Tinoisamoa on his ass and let Marshawn Lynch run for one yard. The hole was there and Robinson had a full head of steam. One of the main requirements for an NFL fullback is to neutralize opposing linebackers to clear a lane or seam, either at the line or in the second level.

To do this, it simply helps to be bigger than them. This is why I have been a proponent for guys like free agents Le'Ron McClain, Vonta Leach, and even little known UDFA Matangi Tonga, a 6'2, 290 pound beast that runs a 4.7 40 and theoretically could, according to my physics calculations, flatback, or at least displace that oncoming 230 pound linebacker. At worst, make him think twice about launching himself into the lead blocker as Tinoisamoa did on this play. If you see gigantic fullback like that barreling towards you, it might make you change strategies; especially for a smaller speed linebacker like on this play.

Really, I put this on the coaching staff -- and I know they're better football strategists than me. If you believe Rob Staton's source then the Hawks will pursue a "prominent veteran full back" so perhaps I will get my wish. I know they have a plan and only 53 men to do it with, --but it doesn't take a genius to do the math on this one. First downs are important. Running the ball one yard when you have to is important. Being able to block a linebacker out of the B gap is important.