The Seahawks' Playbook: Opening Drive in Week 17 Win over St. Louis, Part I

Share All sharing options for: The Seahawks' Playbook: Opening Drive in Week 17 Win over St. Louis, Part I

The Seahawks, and Jeremy Bates in particular, got a lot of praise for their offensive game-planning in their pivotal Week 17 win over St. Louis last season. Their first drive was a good example of what you do when you cannot run the ball if your life depended on it - you use a mix of plays, misdirection, screens, bubbles, a moving pocket, and keep the defense honest by throwing the ball vertically.

The drive wasn't executed perfectly by any stretch; but it was effective and tone-setting and for a team that typically struggles on their first drive, it was a big boost. I'll take you through it.

First, a little background refresher. Matt Hasselbeck had gotten hurt running jogging into the endzone a week earlier and hadn't practiced all week (not that I should talk, I pulled a hammy playing badminton once, not kidding). That means that Charlie Whitehurst had gotten all the first team reps in practice and the gameplan was set up to utilize his strengths. Turns out that by Sunday night gametime, Hasselbeck was feeling well enough to play but the call was made to go with Charlie.

The Seahawks receive the kickoff and Neon Leon Washington takes the ball to the Seahawks' 41 yard line but there's a holding call and the penalty takes the Hawks back to their 13. 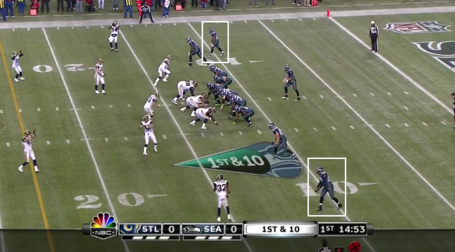 Hawks lined up in a three wide receiver, one tight end, one running back set (technically, two receiver, two tight end but Cameron Morrah is lined up at the bottom of your screen as a receiver.) Justin Forsett is lined up wide right (in box) pre-motion. You can see the defenders kind of calling out coverage responsibilities here as Force is in an untraditional spot for a running back. The corner, Ron Bartell, at this point in time, is outside of Forsett, with the weakside linebacker, Chris Chamberlain, angled out a bit to help in that zone.

Forsett motions back in next to Whitehurst, and the defense adjusts: Bartell moves in a foot or two to mark Mike Williams on the right and Forsett is eyed by the Chamberlain across from him. 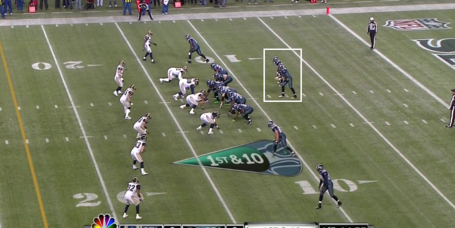 Ball is snapped. Mike WIlliams runs a slant right towards Chamberlain in order to occupy him for a split second. It works to perfection as Forsett releases to the right for the swing pass. 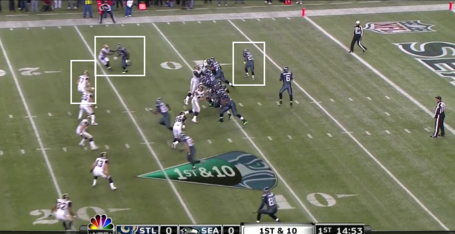 You can see Chamberlain keeping his eye on both BMW and Forsett here as Bartell plays inside leverage at the corner spot. Chris Baker releases with a short little stop route in the zone and has the attention of the middle linebacker James Laurinaitis. 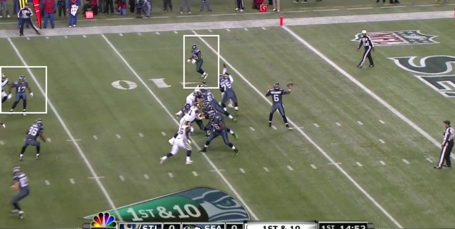 Mike Williams and Chris Baker have done a good job of occupying the two linebackers in their vicinity and BMW has almost even screened off the WLB Chamberlain, which opens up the flats for Forsett on the swing pass. Charlie lobs it over to him. 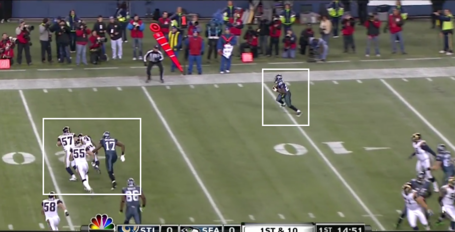 You can see above that BMW has three guys all bottled up and Forsett has a lot of green in front of him. I'm not sure if this is extremely cleverly designed or just bad defense on the part of the Rams. Probably somewhere in the middle of the two. Forsett runs forward before being pushed out of bounds 13 yards later, first down.

If there's ever a perfect time to air the ball out it's on a first down, on your first drive, in a loser-goes-home game, with an inexperienced quarterback and an overly aggressive defense that just gave up 13 yards on a screen pass.

Seahawks in a 4WR set with Forsett in the backfield next to Whitehurst. It's Ruvell Martin and Golden Tate out to the right. 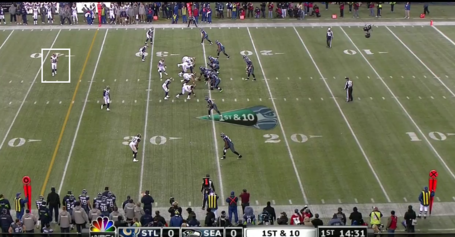 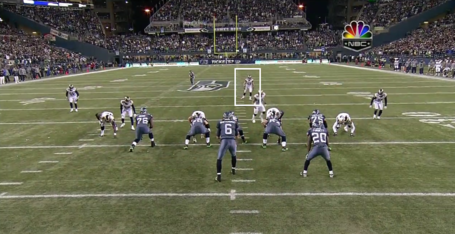 The Rams are in what looks to be a Cover-2 with Criag Dahl boxed in centerfield and OJ Atogwe to your left at the top left part of the screen. He comes in pre-snap to make it look like a Cover-3 but then backs up on the snap. 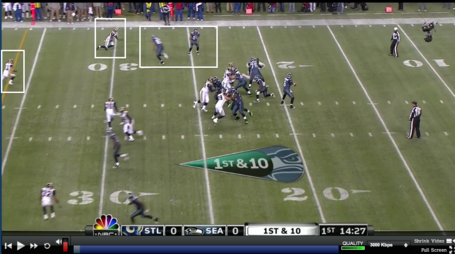 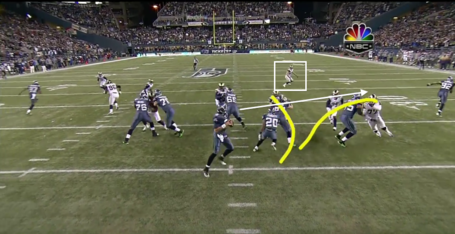 The ball is snapped and Golden Tate stops and looks in to Charlie for what appears to be a classic screen pass - a pretty similar look to the previous play. Both cornerback Ron Bartell and safety Craig Dahl bite hard on this fake and the blitz is picked up very well by Mike Gibson and Justin Forsett. You can see Ruvell Martin on the very far right on the bottom screencap making his way downfield.

Dahl and Bartell have bitten so hard on this play it's not even funny. Whether it was a schematic mis-play on the corner's part for not dropping into deep thirds coverage (if it was actually a Cover-3), or if the safety Dahl just jumped the gun on Tate thinking the Hawks didn't have it in them to throw it deep I can't really tell. Either way, once Dahl has stepped forward he is already out of position on Martin. 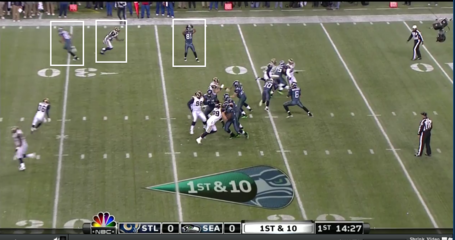 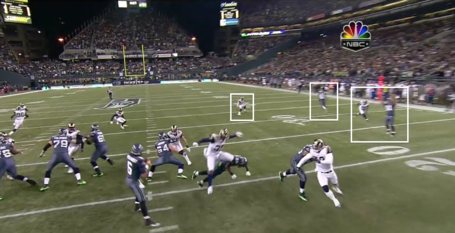 You can see how badly Dahl/Bartell have been beaten here; boxed for emphasis (I include Bartell in the offchance he was supposed to be responsible here for the deep third of the field, it's difficult to tell). You can see Forsett attempting to cut the blitzing linebacker and he does a good enough job of re-directing him that Whitehurst has time to make the throw.

For whatever reason, Whitehurst hesitates before letting the ball go and ends up underthrowing Ruvell by a large margin. Luckily, Martin has gained about 10 yards of separation and he slows up to reel it in. 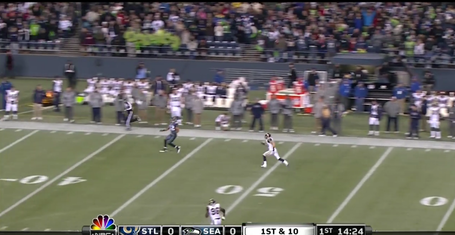 Martin makes the catch and runs forward for another 15 or so yards. The play goes for 61. Not bad for play #2 of the game.

I'll finish up the drive in a few more posts in the next few days but I wanted to set the stage a little bit with this introduction. I think it's good to highlight each play in any given drive because it really points out the intricacies and strategy behind play calling. In this case, Bates basically hustled the Rams' defense by running a quick swing pass on play one which set the tone for what St. Louis were probably already expecting: short, quick tempo pass plays to build Whitehurst's confidence and get him into a rhythm.

The Rams were looking to pounce early and rattle Whitehurst but proved to be overanxious in pursuit of what looked to be a screen on play two. They fell for it badly and Ruvell Martin was able to streak up the sideline wide open for what really should have been a touchdown. I'll take 61 yards but you know Clipboard Jesus wishes he could have that one back.