I started you off in part one with the first two plays from scrimmage the Hawks ran in their opening drive against the Rams Week 17. The first play was a screen pass right that went for 13 yards or so and the second play was a fake screen, which St Louis bit on like they were having a grand-mal seizure. Charlie Whitehurst faked the screen to Golden Tate and threw it up for Ruvell Martin, who was streaking down the sideline wide open. The play went for 60 odd yards and put the Hawks into scoring position.

That brings me to the third play:

The Seahawks are lined up in a 3 TE set here with Cameron Morrah on the wing left, John Carlson in the slot left, and Chris Baker off the line a step, lined up as the H-back. One thing that stuck me about this game in particular was the use of tight ends on the wing. It seemed like almost every play you'd find John Carlson or Cameron Morrah lined up as a receiver. Anyway, Mike Williams is in the slot to the right and he's flanked by RB Justin Forsett on the right wing. 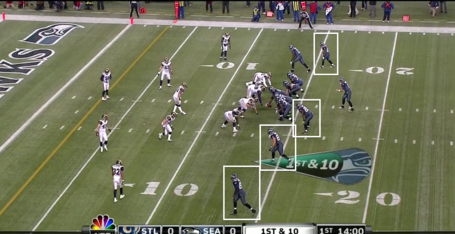 Before the snap, Forsett motions over and positions himself to Charlie's immediate left. 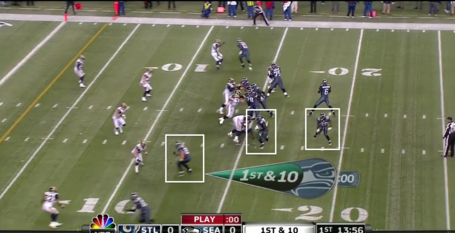 The ball is snapped and Forsett runs a flat route towards the sideline. Chris Baker runs a parallel route in front of him, looking for somebody to block. Morrah and Carlson release downfield and look to block their defenders as well. 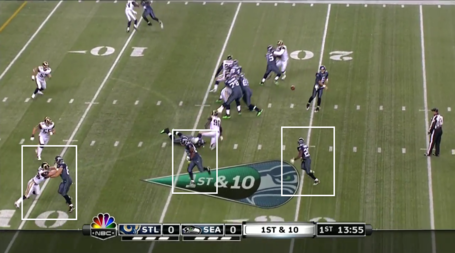 Carlson and Baker do a decent job finding and holding their blocks as Forsett reels in the pass, looks upfield, slips past Carlson's defender and gets hit hard by the unchecked safety on the play. 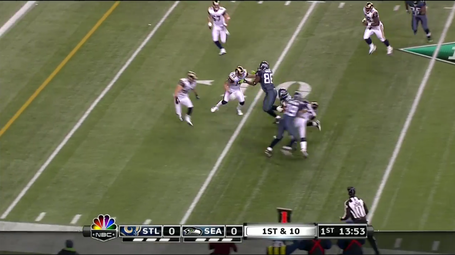 Overall not terribly executed and it goes for 4 yards.

At this point, the announcer, Cris Collinsworth notes: "Well, I don't think they're too afraid of letting Charlie Whitehurst play, do you? I mean they come right out, three straight passes, spread out the formation. They're not even going to try and run the football, not that they've had any success. But Pete Carroll's been involved with some big games and he's saying, 'what the heck, let's go fire it downfield.'"

Funny you should say that Cris, because on the next play they do in fact try to run the football. And it's stuffed for a loss of 4 yards, which has now completely negated the gain they made on first down. Which makes it 3rd and 10, awesome. They set up for a pass play and Charlie takes a sack, but due to a flukey defensive holding call against the Rams, the Hawks pick up a First and Goal. Nice.

Now, generally speaking, if you are having difficulty running the ball, which the Seahawks do/were/had, you substitute runs with screens and swing passes to chip away at the defense. Which is exactly what the Seahawks have done and continue to do on this drive.

Seahawks in a 3WR, 1TE, 1RB set with John Carlson lined up to the wing right, Ben Obomanu and Golden Tate in the slot right, and Mike Williams out on the left. I've put a box around Tate, who will be catching a swing pass on this play. 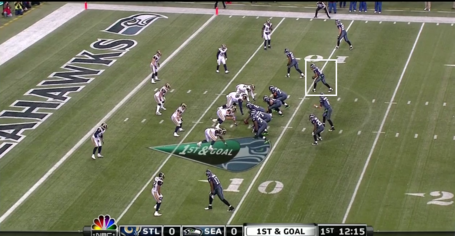 John Carlson motions in the left and form what is basically a trips formation. 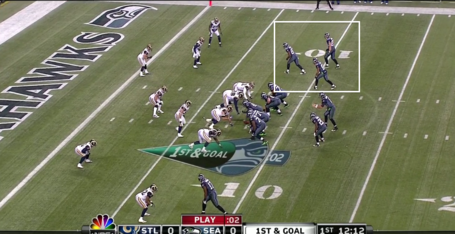 Ball is snapped, it's a bubble screen to Tate: 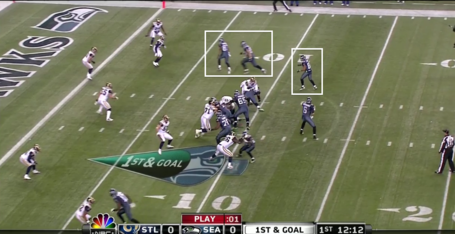 Carlson and Obomanu set forth finding someone to block and Tate brings in the swing pass. On this particular play, neither Carlson nor Obomanu have much success in their blocks but Tate is shifty enough to pick up a few yards. 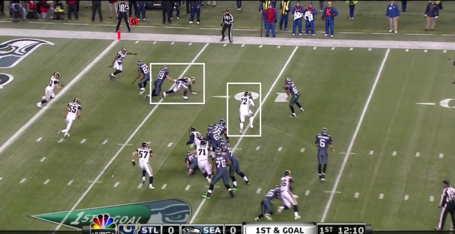 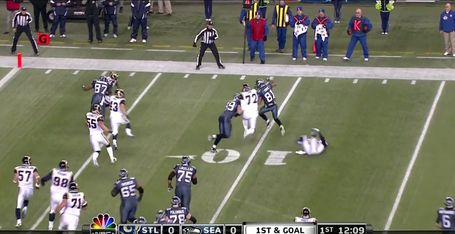 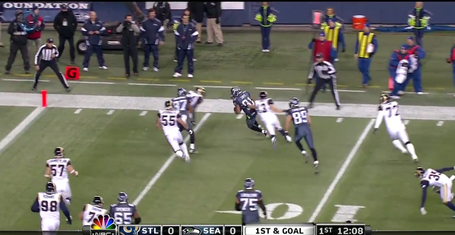 This is the kind of play I'd expect to see Golden Tate involved in quite frequently in 2011.

The reason I chose to break down this possession is because, firstly, it was the first possession of the game and thus likely scripted beforehand by the coaching staff, and secondly, it's basically a case-study in how to move the football if you cannot run the ball. It worked for the Seahawks because they game-planned well and executed that game-plan. Obviously, St Louis didn't help themselves on the 61 yard bungle that allowed Ruvell Martin to get wide open, but it was set up by baiting them with what looked to be a plan to use swing passes and dump offs to give an inexperienced QB some confidence. Instead, they went for the gusto on the second play from scrimmage (which I love). If Charlie had been more accurate on the play it could have gone for a TD. Regardless, the Hawks ended up marching the rest of the way down the field and set themselves up for a 2nd and Goal from the four yard line.

In the third part of this mini-series I'll break down the next play, a touchdown pass to Mike Williams.