Breaking down the types of players Pete Carroll looks for at safety.

Share All sharing options for: Seahawks' 4-3 Under Player Types: Safeties

The safeties are key players in the Seahawks' 4-3 Under defense. The first main thing you may notice is that in Pete Carroll's defense, he'll typically use two 'free safety' type players and not the more traditional method which calls for one big, run stopping strong safety opposite a rangy, fleet-afoot free safety. The free safety and the strong safety are pretty interchangeable in this defense and both need to have a versatile skill-set. In 2010, for example, Lawyer Milloy played the strong side safety position and at 6'0 211 was a bit smaller than you'd typically see there. Opposite him was Earl Thomas at 5'10 202 pounds.

The safeties are responsible in pass protection deep and stopping the run when needed so they have to be instinctual and quick. On one play Earl Thomas could be up at the line playing man-to-man coverage on the slot receiver, the next be blitzing from the edge, and the next dropping back into the deep centerfield to protect against the deep pass. Same goes for Lawyer Milloy.

In general, as Pete Carroll describes, "the two Safeties are both fill where needed sort of players. All the players in this defense have to keep the blocks in their inside shoulder and force the ball carrier back inside to the next player.

So the free safety typically aligns himself to the weak side of the offense and either runs in pass coverage or helps against the run there. He's keyed into the defensive end, and helps him out if that player fails to control his gap or zone.

Carroll continues, "The defensive backs that are the best run defenders are our safeties. The Free Safety is a player who makes a lot of tackles for us. He has to have good instincts. He is what we call a natural player. You don't have to coach this player too much. He has to have a feel for the everything and understand the big picture."

Hence: Earl Thomas. Pete Carroll wasted no time in drafting an instinctual, ballhawking free safety when he took over in Seattle and this is the reason why.

There are two safety positions though, and the strong side safety is very important as well. In a Cover-1 or Cover-3, the strong safety will sometimes be tasked with defending the middle deep part of the field and thus must be very quick, instinctual, ballhawking, and smart. Here's what a basic Cover-1 or Cover-3 can look like in Carroll's defense: 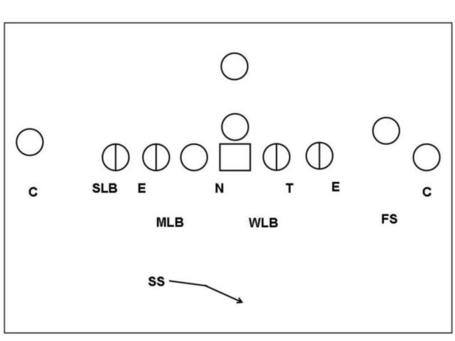 You can see that in this case, the free safety plays up in coverage on the slot receiver to his side and the strong safety is responsible for the deep third. You'll see the Hawks running this D pretty often and they like to match their corners up in man press or bump-and-run with the deep safety providing help over the top.

The deep safety is arguably one of the most important cogs in the wheel in this case, and the position is very familiar to Pete because it is the position he played in his youth.

As Pete put it, "the deep safety is a player that is close to my heart. That is what I played. The deep safety has to play two routes. He has to defend the seam route and the post route. That is all I ask him to play. He has to find the seam route from the number two receiver. If there are two of them then he has to get in the middle and play them both. On the post route he has to stay on top of that route. That is easy to do but it becomes harder as offenses do more of it and get better at it."

Many people believe that ballhawking safety Mark LeGree was drafted with this deep-middle-protector role in mind. It's what he excelled at while at Appalachian State and what helped him pick off a record 22 interceptions in his career there. Naturally, people will question whether LeGree can make the jump from FCS to the NFL, but Pete Carroll's philosophy attempts to simplify roles. He said, "If you have a million reads for your secondary you are crazy. ...All they need to know is their primary responsibility and then secondary. At the highest level in the NFL, the pass game is as complex as you can imagine. However, if a defender can play the post and the seam route then they can learn to play at that level. The thing that kills and breaks down a defense is a ball being thrown over the defender's head for a touchdown."

When he was drafted, LeGree alluded to this very thing. He said, I'm a competitor; instinctive player, I can play the single high safety. I'm a reliable safety, and I can pick off that deep ball. They said they wanted me to protect the deep ball. They were telling me that this was a great situation for me to come in and possibly start..."

Another scheme you will see the Seahawks run frequently is the Cover-2. In a Cover-2 scheme, you play two safeties deep, and similar coverage principles apply. In this defensive alignment, both of the safeties split the deep part of the field into two zones and each player is responsible for their zone. There are some weaknesses though, of course. Jene Bremel of FootballGuys.com provides a schematic diagram of it below: 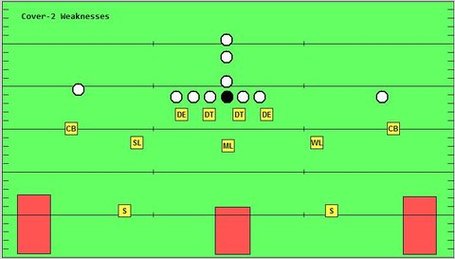 As Jene puts it, "Cover-2 teams must have talented safeties and an elite pass rush. Each safety has to be able to cover an entire half of the field. They need range, closing speed, tackling skill and enough run-pass recognition ability not to get fooled by play-action. It's extremely difficult for one defensive back to handle the deep middle and the deep sideline. Having an average safety behind a poor pass rush that gives the quarterback time to wait for the deep routes to develop is a recipe for disaster."

So in a Cover-2, both safeties need 'range, closing speed, tackling skill, and enough run-pass recognition ability to not get fooled by play-action.' I think a lot of people assume that LeGree was drafted for this reason but he'll have competition in 2010 draft pick Kam Chancellor. Chancellor is known for his hard-hitting run support, but it gets forgotten that he played free safety and even cornerback as well while at Virginia Tech. Chancellor was drafted with versatility in this regard and with experience at multiple positions in mind (I would guess). He will be looking to showcase his ability this season, as will LeGree.

It will be interesting to see who the Hawks bring to camp. They are short on veterans at the moment so I'm anxious to see if they re-sign Lawyer Milloy and/or Jordan Babineaux. I'm not convinced they won't pursue a veteran free agent or another UDFA or two to compete at the safety spot as well.

I recognize this piece was a bit rambling and I tend to lack an introduction, body, and conclusion, but I've tried to illustrate a bit what the current Hawks' FO looks for to play that position, so hopefully this helps a bit to lay out what Pete Carroll and John Schneider consider when making personnel decisions there.