The Replay Booth: Lofa Tatupu - He's Still Got It Folks

Share All sharing options for: The Replay Booth: Lofa Tatupu - He's Still Got It Folks

Lofa Tatupu is a 3-time Pro-Bowler and was All-Pro in 2007 but injuries have nagged at him for the past two seasons and big, game-changing plays have been more few and far between as of late. This is a symptom possibly of more than just age and injury taking it's toll; in the Pete Carroll defense he's relied upon to drop back into deep middle third pass coverage more often and has had to evolve in his play. He's dealt with injuries on the line in front of him and has seen his 'contemporaries' in Julian Peterson and Leroy Hill fade into memory (for different reasons). Some people doubt he can regain the all-world form that made him the Seahawks' unquestioned leader on the defense as a rookie, but I'm sure he'd have a thing or two to say about that.

For what it's worth, he still finds ways to impress the hell out of me. I was reminded of one of those instances as I was re-watching the Divisional Playoff game against the Bears last night. In a third and four situation, Lofa came up with a big sack to end a drive in a game that was still very much in hand for the Hawks as they trailed 7-0. I'll set it up for you, and you can watch it here:

Bears in a 3 WR, 1 TE, 1 RB set with Matt Forte offset to the right and Jay Cutler up under center. Seahawks are in their Bandit package here with Lofa the lone linebacker in the middle. 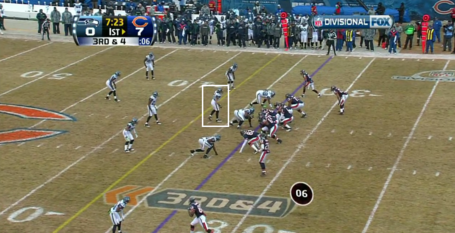 Clemons, Cole and Brock are the three down linemen and on the snap rush the QB like madmen. The Bears release their 3 WRs and TE Greg Olsen runs a 7 yard or so drag. The seven defensive backs tasked with defending the pass do their part and Cutler has no where to go with the ball. Brock does a nifty spin move that puts him in a position to threaten a sack. 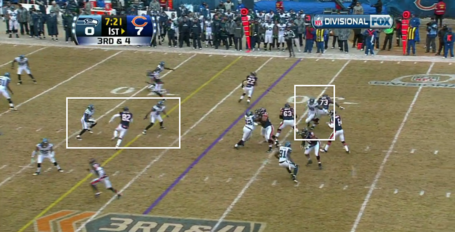 At this point, you can see Tatupu eyeing Cutler as he passes Olson off but you can tell he's poised to pounce if ole' Jay decides to leave the relative comfort (or lack thereof in Chicago's case) of the pocket. Cutler takes one step to his right a moment after this screen shot, if that, and Tatupu doesn't hesitate.

You hear a lot about instincts and guile at the middle linebacker position and this play sums it up for me. The moment Cutler THINKS about starting to decide to make a run for it, Tatupu is in a full on sprint to head him off. This is a case where if Tats had even hesitated a second the play could have gone for a first down. Instead, he's on him like a greyhound coursing a hare. 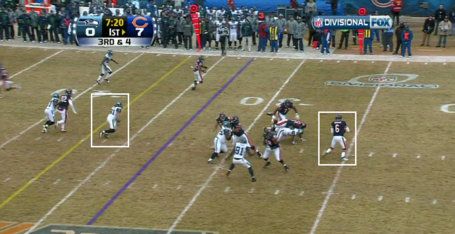 You can see Tatupu already in full stride as Cutler starts to go to the right and the Bears' QB has no shot. Tats takes a good angle and is on him shortly. 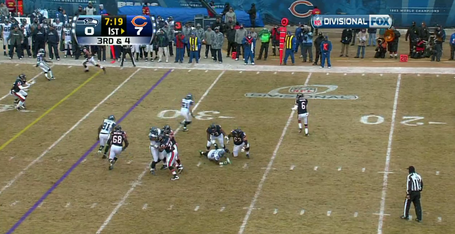 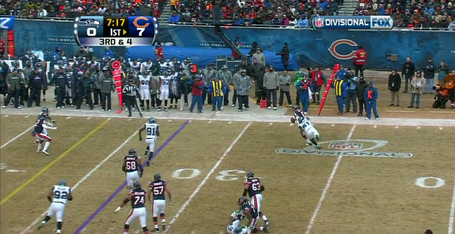 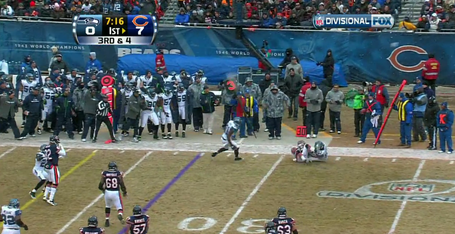 We should also applaud Clemons coming from the opposite side and in place to make the tackle had Lofa missed his. Overall, this play was made on quick, instinctual reaction by Tatupu and good pass defense by the secondary. It gives me hope for the Bandit package and it renews my hope that Tats will be back to the form we're used to seeing him play at in 2011.