If you want to see a stunt run to perfection, I have good example for you. First off, I'll set you up with the situation; Week 16, at Tampa Bay. The Hawks really don't have to win this game; the outcome is irrelevant with regard to Seattle's playoff hopes. Win or lose they will still have to beat the Rams next week to win the NFC West. That said, you play the game to win and pride is certainly on the line here. Momentum, confidence, and a winning culture are not intangibles that you want to discount.

Here's the play (watch it here):

The Bucs are driving down the field with relative ease but the Hawks have slowed them a bit once into the redzone. It's now 3rd and 8 on the Seahawks' 16 yard line. Hawks are leading 7-0 at this point and thus far have looked pretty good, save for Hasselbeck hurting his back while jogging into the endzone. You'd love to get a stop here and force a field goal attempt and the down and distance affords them a little room to get creative. Which is exactly what they do.

The first thing you'll notice about this set is that Aaron Curry is on the weakside right, shadowing Chris Clemons. This is a departure from the Seahawks' base package where Curry would almost exclusively set up on the strong side opposite Clemons and on the outside shoulder of the tight end in-line, if there is one. Here though, he's immediately made the offense think twice about what is going on by trotting over to the other end. I've put a box around Bucs' tight end Kellen Winslow and Seahawk MLB Lofa Tatupu because from the offset Tats is lined up in the middle between down tackles Jay Richardson and Brandon Mebane and is showing blitz. He will be the man responsible for running with Winslow on this call but has done a good job of hiding it. 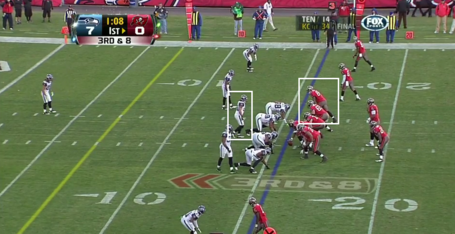 Cadillac Williams has lined up to the left of Josh Freeman because of the Seahawks' overload weakside and will be responsible for Curry in the event he rushes the passer. 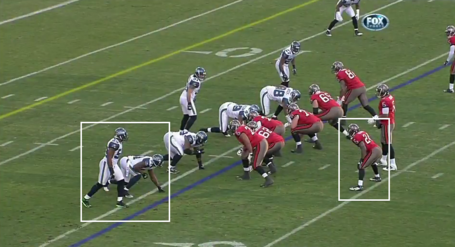 I like how the Hawks have mixed it up here and it's not a look that you see very often so I'd like to think ole' Josh Freeman above is wondering to himself what the hell Curry is up to on Clemons' outside shoulder.

On the snap, Curry bullrushes and Clemons stunts underneath Brandon Mebane, who himself has done a great job of getting push on the line. This is key in that Clemons can get to the hole very quickly and does not have to hesitate. Well done by Mebane. 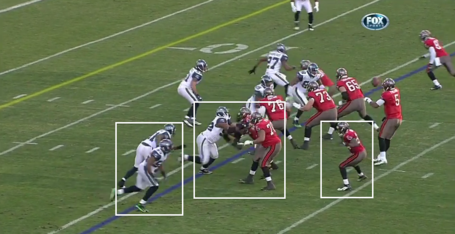 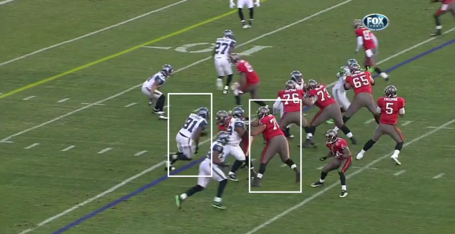 Here above you can see Clemons stunting underneath and Mebane effectively occupying both the guard and the tackle. The left tackle has attempted to head Clemons off over the top at the pass so to speak and you can see Josh Freeman looking downfield. Jordan Babineaux has left his space to shadow the slot receiver and Lofa Tatupu has dropped into coverage on Winslow. Raheem Brock on the strong side has jumped out of his stance and is attempting a rush to the outside.

Below you see how quickly Brock has beaten his man. It also helps that it appears the Bucs were going to run a screen or dumpoff here with Cadillac Williams as you see Josh Freeman looking left to flip it to him for a moment. Unfortunately though for Freeman, Williams is preoccupied with the oncoming Curry and never turns to find the ball. To be honest with you I'm not sure what the designed play was here and I'm not sure that left guard (62, in no man's land) knows what city he's in. 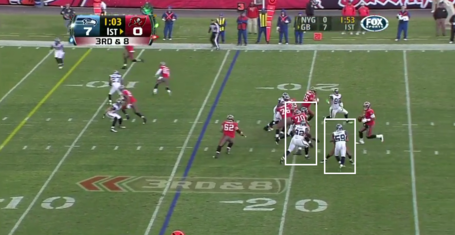 You can't see Clemons at this point because he's covered up by the left tackle but if I show you another angle you can see how he's effectively beaten his man to the hole in the line (below).

Clemons gets past him with ease and is on Freeman in an instant. You can see Freeman looking to Williams for assistance but Curry has him all bottled up. For Jay Richardson's part in all this, he's commanded a double team by the center and right guard and is doing his job beautifully. Richardson is a player that is versatile enough to play any spot on the line and earned himself a good amount of snaps towards the end of the year. He's someone to watch this fall. 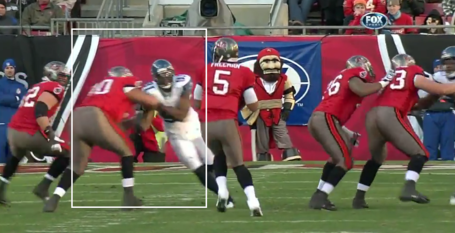 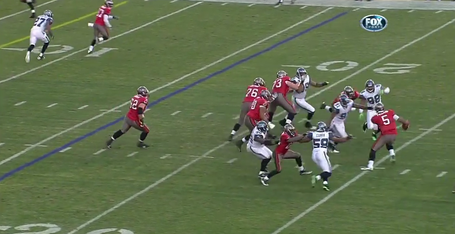 Freeman realizes that Williams is not going to help here and tries to use his considerable athleticism to escape but the Hawks have swarmed him quickly. Clemons, Curry, and Brock have all beaten their man, whether through skill or scheme, and have Freeman for the sack. Well designed, well executed, and called in the perfect situation. By bringing so many on the blitz so quickly, Freeman does not have time to let the screen develop and the Hawks get home.

Freeman loses 13 yards on the play and the Hawks force the field goal attempt on a windy day with 35 mph gusts. The attempt is good but from 46 yards it's not a chip shot by any means; the kick is ugly and wobbly, and for a second I think it might not go through. Overall a good defensive play in a game where the defense looked like a junior varsity squad. At least there was one bright spot to focus on.