When I go back and re-watch Seahawks games, one of my main goals is to pick out plays that stood out to me and break them down to you. One of the plays I broke down in detail a few weeks ago was a really instinctual and aggressive play by Lofa Tatupu in a third down situation. The play I picked out today comes from Lawyer Milloy in a 3rd down situation where he relied on quick recognition, aggressiveness, and basically what I can describe as a 'veteran savvy' in making the stop.

Here's the situation: Week 8 at Oakland, first quarter, the Raiders up 3-0 and trying to get a drive going. They've managed to get into a 3rd and 3 situation and are set up in a 3WR, 1TE, 1RB set with Jason Campbell in the shotgun. 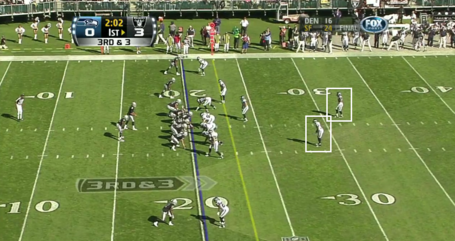 You can see that the Hawks are in a Cover-2 look with their corners Marcus Trufant and Nate Ness (remember Nate Ness?) lined up right on the line of scrimmage in what looks to be press coverage. Earl Thomas is to the top of your screen on the right of the defense, and Lawyer Milloy is on the strong side in the secondary.

As an aside, Will Herring is creeping up in the SAM linebacker position for this set and is flanking Chris Clemons in a flipflop of what you'd normally see (typically Clemons would rush from the weakside (away from the tight end). 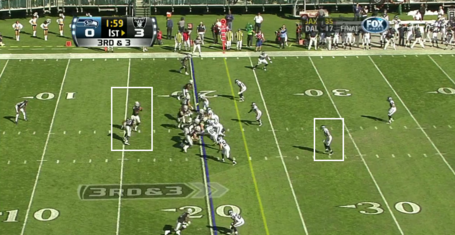 The ball is snapped and almost instantly you can see Milloy recognize the draw play. This is key because if Milloy hesitates on this play for one second the run has a chance to go for a first down. 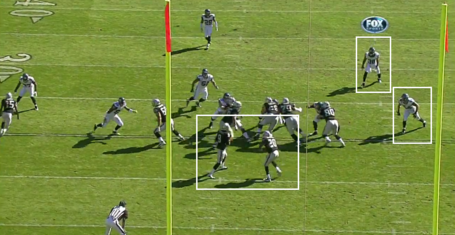 From another angle, you can see Jason Campbell receive the snap and above you can already see Milloy moving forward. Herring is holding steadfastly on the edge, keeping his contain.

At first glance this play looks like it's setting up to be a counter but Darren McFadden takes one step towards the left B gap before changing direction to the right side B gap. You can see below, the left guard is pulling to the right to blow up Herring, leaving Lawyer Milloy responsible for the hole in run support.

By the time McFadden makes his cut to the strongside B gap Lawyer Milloy is flying downhill with a full head of steam, integral in this situation to hold the Raiders on 3rd and relatively short. 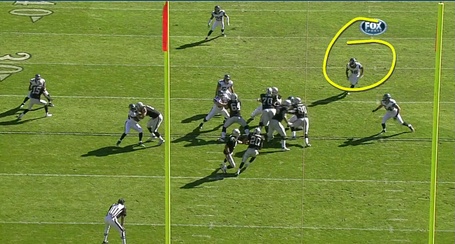 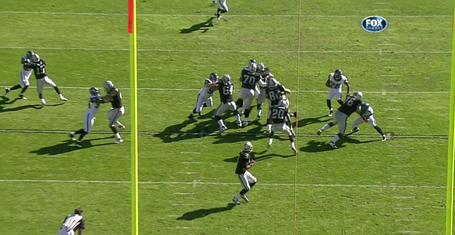 Above you can see Milloy closing off McFadden's hole and forcing him to stop in his tracks. If Milloy had hesitated, there's a good chance McFadden would have hit the hole hard and could easily have dragged Milloy a yard or three for the first down. There is less room for error on these types of plays than people think, and remember that Milloy is lined up 10-15 yards off the line of scrimmage on a 3rd and 3 situation. Because of Milloy's quick reaction, you see McFadden try to salvage something back to the left.

Milloy is on him too quickly. 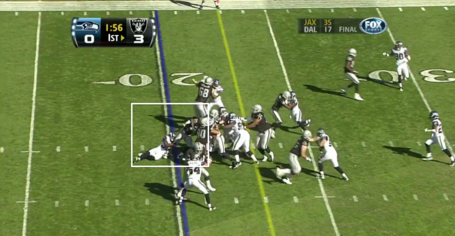 A great stop on a third and 3 situation.

In my 4-3 Under series of posts I detailed what skill-set the safeties in this defense should have. As Jene Bremel put it, "they need range, closing speed, tackling skill and enough run-pass recognition ability not to get fooled by play-action."

This wasn't a play-action play, it was a draw, but the run-pass recognition was almost instantaneous on Milloy's part and is a good demonstration of what a veteran player can do for your team despite declining physical abilities. At first glance, it's coincidence that the two plays I picked out recently were by veteran guys that by most accounts are not elite physically and declining in effectiveness - Lofa Tatupu, once a perennial Pro-Bowler but now beset with injuries, and Lawyer Milloy, a 36, soon to be 37 year old safety that has been around for so long he played on Pete Carroll's last NFL team, the New England Patriots, over a decade ago.

On second glance though, maybe I actually picked out these plays because of the split -second reaction times and reliance on instinct and these skills are what stood out to me. Young players can rely on their physical abilities more and this can provide a cushion of forgiveness when they hesitate on a play. With players like Lofa and Lawyer though, this is a luxury they can't afford.

This is just one play and cannot be mistaken for an entire body of work. I'd have to watch a lot more tape to determine for myself whether it's in the Hawks' best interest or not to bring back Milloy. This play doesn't really prove anything one way or another - if you try and pick out highlights from this game you're going to have to really reach. The Hawks ended up losing 33-3 on what was one of the most frustrating days the entire season. I just saw this play and came away impressed with the veteran.

I don't know if Lawyer will be back with the Seahawks in 2011. Eric Williams put together a good piece on Milloy the other day and it sounds like he is ready to play another season. Whether it is with the Hawks or with someone else, not even Milloy knows. Here's what he said (per Williams):

"I had a chance to get back on the field last year, and I had outstanding numbers. You can put my numbers up to really anybody out there besides interceptions. I did the dirty work and I did my job. I definitely outworked my pay while making people around me better, and that's what I do.

"I'm a free agent, just like anybody else. I'm available to all teams. That's the only thing. When I go out, I want to go out fighting for a job. Just like last year when I talked to Pete (Carroll); I don't want anything handed to me. I want to go out and earn it. And as long as I feel that I can do that and keep my body in shape (I'll keep playing)."

Does that mean he wants to play again here in Seattle?

"Yeah, I'm a free agent. As a business person, you never say you love one situation over another when you're trying to get a job. I want to win a championship, that's always first and foremost. Being at home is a bonus. I'm open to whoever thinks they can have an older guy that can make plays, make people around them better and that can lead a team ¬ that's the best situation for me and that's where I'll be."

If he's not back, the Hawks may need to find an experienced strong safety to step in and guide our young secondary. Kam Chancellor and Mark LeGree, though extremely talented and potentially future stars, are raw and untested. If they step into the starting role they will need to demonstrate this type of instinct and prove they're not susceptible to biting and finding themselves out of position on play action and draws. I don't know if the Hawks are willing to gamble that they are indeed ready at this point. We'll see.