Aaron Curry gets talked about a lot here, in the blogosphere, commentary, forums and papers, and a good deal of it is negative, but the good things he does for the Seahawks defense often get overlooked. The misconception is that because Curry was a number four pick in the draft, he should be putting up Clay Matthews sack numbers and making the Pro Bowl every year. Well, that's not completely fair. He has been underwhelming in relation to his draft position, but his role in this defense is not going to allot him flashy statistics. His role is to be a force on the edge, match up against tight ends, and occasionally rush the passer. The Sam linebacker, as I mentioned recently in a 4-3 under player type breakdown, should be "a good containment player. He has to be big and strong enough to play on the edge of the tight end."

I was doing some research for my continuing Raiders' jumbo package series, and a play Curry made against this formation really stood out to me. In this case though, instead of needing to be big and strong enough to play against a tight end, Curry is matched up against 6'5, 325 pound OT Khalif Barnes on the edge because of the Raiders 6OL formation. This is the role typically reserved for defensive ends but Curry handles the situation exactly like you'd hope he would. 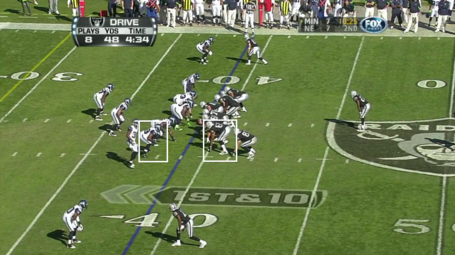 You can see that the Raiders are in their 6OL set here, with TE Brandon Myers set to the left in the wingback position, and OT Khalif Barnes the 6th offensive linemen, set up to the left side. Curry is lined up across from Barnes on the strong side, and because of the extra linemen, strong safety Lawyer Milloy has come down to the line to match up with the tight end. It looks like the Hawks are in a cover-3.

For the Raiders, Darren McFadden is the lone back, and Jason Campbell is under center. Ball is snapped. 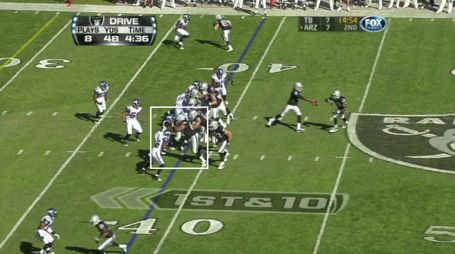 It's a run to the left with Barnes and Myers attempting to seal Curry and Milloy off. The goal here is the C gap - what normally would be the hole between tight end and left tackle is now tackle and tackle. Here's where Curry dominates his assignment. 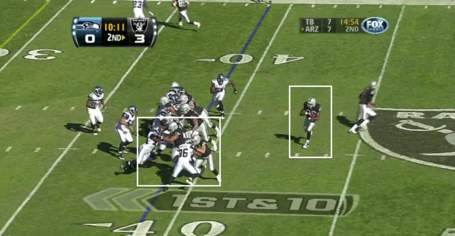 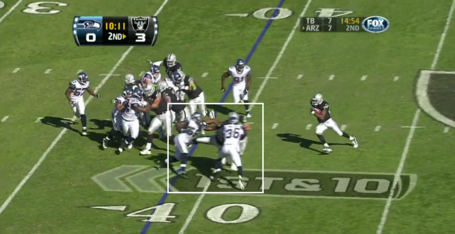 You can see here as McFadden makes his cut and I've boxed Aaron Curry THROWING tackle Khalif Barnes to the ground like he's a 175 pound receiver. Milloy, for his part, has held the edge well against the tight end. 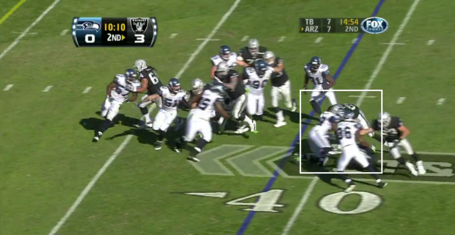 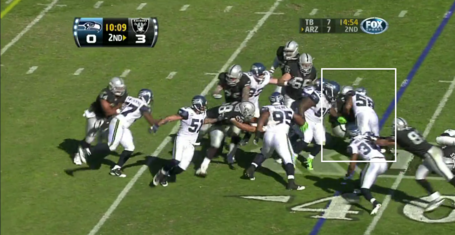 Curry, after dispatching Barnes, meets McFadden head on and tackles him, allowing a mere yard on the play. This is the type of play that you love to see from your strongside linebacker. It's not glitzy.. Curry is fairly hidden in a group of defenders and if you're not watching closely it just looks McFadden runs into a pile. The fact that Curry shed his block so well should not be discounted, even though Barnes is no pro-bowler. He took on a much bigger lineman, used technique to get off his block, met the runner head on (while delivering a solid hit), and made the tackle.

If you use this as a microcosm of what Aaron Curry could be for you, things start to look bright. He does have an ability to manhandle tight ends and even tackles, as he does here, and the basic assignment of being a strength on the edge seems easy for him. He runs into problems when forced to read and react; maybe it's the speed of the game, maybe it's him learning the system. Over the season I remember hearing quotes from Carroll on how they're trying to get Curry in a position to just play without thinking - something that he could excel at considering his size and athleticism.

As for how the coaches feel about Curry, here's what Carroll said after the season: "We would like to continue to utilize him on the line of scrimmage. He's a real physical factor matching up on the tight ends, and he'll continue to get that done. He really excelled on that, and we'll just continue to let him grow in that situation.

He wasn't super effective rushing from the 9-tech position (strongside linebacker) but did have some success when they lined him up in unconventional spots - a down lineman in the Bandit package would be one example. Maybe they'll look to build upon that in '11.

Pete Carroll had some additional comments on Aaron Curry after the season and they're basically in line with how I feel about the Seahawks' strongside linebacker. Carroll said, "The thing about the situation, he was the fourth pick in the draft and expectations were ridiculously high. He made a ton of money. He is a really talented, big, good-looking athlete and everybody on the outside expects him to be something different than what he is right now. He hasn't dominated yet, but he is a player on the come and he is improving and working hard and figuring it out. He is a factor. He is a real positive factor for us. But it's all expectations. That screws everyone up.

If you take a look at how he plays and what he does and how he produces, he's getting a lot done. But it doesn't meet up to the expectations. You can almost mis-evaluate him because he is supposed to be whatever he is supposed to be. To me, he is a guy on the team who busts his ass and is working hard and we're trying to fit into situations and a role for him that is best. The first day I got there, within the first hour, I put on film of him because I wanted to see what he could be as a pass-rusher. See if he had that ability because of the speed and the size and all that stuff. My expectations for him are high, but I don't think they are unrealistic."

In a nutshell, he's not as bad as everything says he is, but he's also not as good as everyone was hoping he'd be. He'll look to bridge the gap between the expectations and reality next season. It seems that Carroll is expecting him to develop as a pass rusher so hopefully they'll put him in a position that utilizes his natural abilities better.

Dan Pompei alluded to a change, as he wrote recently, "Seahawks coaches want to tweak the way they use linebacker Aaron Curry. They want to have him drop less, especially in space. When Curry does drop in the future, it likely will mostly be on hooks to the flat. The fourth pick in the 2009 draft is a more effective defender on the line with his hands on the tight end. That way, he can use his strength and length to his advantage, and he doesn't have to think as much. Curry is a strong point of attack player who also could be an effective pass rusher. It's possible he will get more chances to chase the QB as well."

Aaron Curry is probably the most polarizing non-quarterback on the Seahawks' roster (Hawkblogger actually wrote almost this exact sentence in his AC piece yesterday as well, but I'm keeping this because I wrote this article a few days ago.. but just FYI I'm not plagiarizing) and there's been plenty of re-hashing on the subject this offseason already. Benne did a good week-by-week look at Curry's play and I highly suggest you revisit them now.

John Morgan did a couple of tape-reviews of Curry as well, here, here, and here.