I detailed in part one and part two how the Seahawks managed to march down the field and put themselves into a 2nd and Goal situation from the 4 yard line. Of course, 61 yards of the drive came on a fake screen pass that made two Rams defenders bite and the ball was thrown over the top to a streaking Ruvell Martin. A  large part of the success of the possession though was due to swing passes and bubble screens run well and were put into play mostly because of the Hawks ineptitude in the run game.

The Hawks now find themselves deep in the red zone and poised to capitalize. Let me set it up for you:

Hawks are in a 2TE, 2WR set with Chris Baker and Cameron Morrah in 3-point stances in-line to the left. Mike Williams is set out to the far right off the line with Ben Obomanu in the slot right. Marshawn Lynch is set up next to Charlie Whitehurst, who is ready to take the snap in the shotgun position. 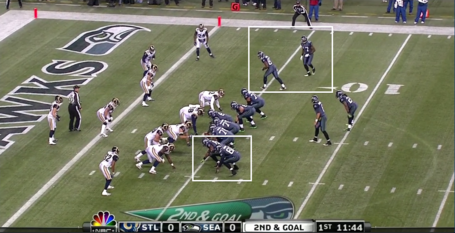 You can see that Mike Williams has gone into motion to the left and he'll end up pretty close, almost stacked on Ben Obomanu at the snap. I've also boxed Morrah and Baker down towards the bottom of your screen. The Rams are in what appears to be a Cover-2 defense though it's kind of jumbled up because of the Hawks' field position. 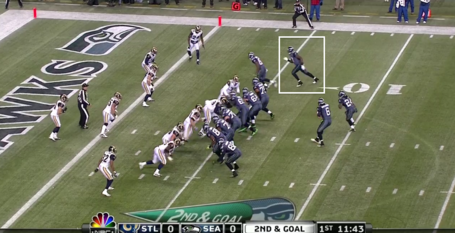 Here you can see Charlie going to his right and the pocket starts moving the same direction. For their part, the offensive line gives Charlie all kinds of time and no Rams even get near their target on this one. I've boxed the Rams middle defenders here because you can see them all moving in the same direction as the pocket; two linebackers, James Laurinaitis and Chris Chamberlain, and a safety, Craig Dahl. The corner on the strong side, away from the action and movement, is Bradley Fletcher.  They're all overplaying to that side because that's basically where everyone is going, but the two backside guys at this point, Dahl and Fletcher, are about to get smoked. 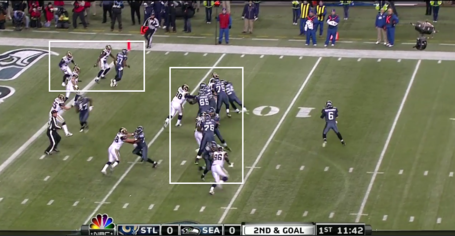 Above you can see how Ben Obomanu has occupied the corner on his side and two other defenders. Even the middle linebacker Laurinaitis seems to be just passing Mike Williams (now in the middle of the field) on and is more concerned about Charlie trying to run it in. I've also boxed the offensive line because, damn, well done. 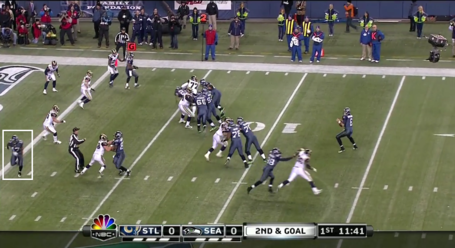 Right about NOW is when Jeremy Bates is cackling evilly into his headset ("muuuhahahaha"). The misdirection has worked well and Charlie turns back to his left to see Mike Williams running past his defenders. For a better look at how fooled St. Louis was on this one we need to consult another angle: 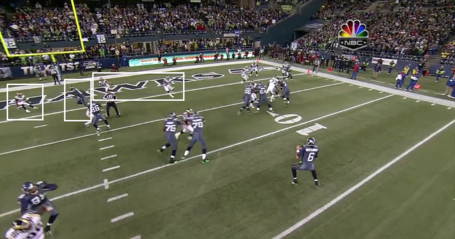 Above you can see the far side cornerback, Bradley Fletcher, has over pursued to his left, and once he sees that Williams is the target it's too late. He tries to change direction as he realizes that Mike Williams is running a drag route toward the sideline but BMW already has a full head of steam in that direction. The safety and middle linebacker for St Louis are now just realizing what is going on but are far out of position at this point. 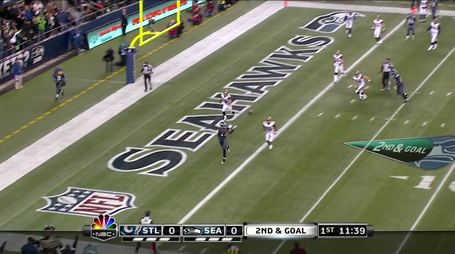 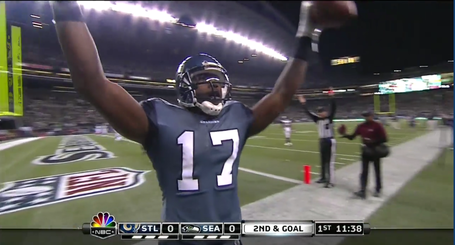 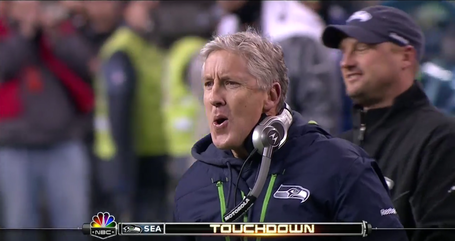 Cris Collinsworth: "Boy, what a first drive for the Seahawks!"