I'm in the process of going back and taking a look at some Tarvaris Jackson (and Sidney Rice) tape to try and give myself, and by extension, you, a better glimpse of what to expect, and I ran across a play that's worth mentioning. First, it shows Jackson's arm strength and Rice's leaping ability, his skill in tracking the pass and adjusting to it, and his talent in coming down with the ball. All in all - I think it's something that you can hope to, or even expect to see in 2011 from the Hawks. You can watch the play here.

Now, I'll set it up briefly. Week 13, Buffalo at Minnesota. Brett Favre has just been completely annihilated and has left the game after throwing a pick. The next series, Tarvaris Jackson comes onto the field in relief.

The play comes on a 3rd and 10 with the Vikings backed up to their own 10 yard line. 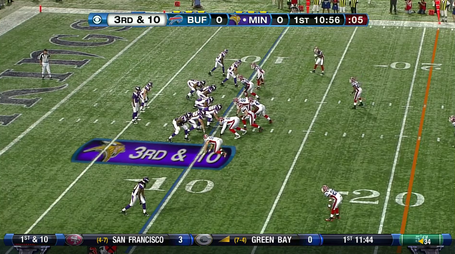 You can see the Vikings are in a 3WR, 1TE, 1RB set with Sidney Rice the split end on the right. Tarvaris Jackson is in the shotgun with Toby Gerhart on his side. It looks like the Bills are in a cover-3 with CB Leodis McKelvin playing off of Rice by a good 10-12 yards.

Ball is snapped. A flag immediately goes up and Tarvaris sees it. He's fairly decisive and calm and lets it rip downfield to Rice, who is now out being trailed in coverage by McKelvin.  (cont...) 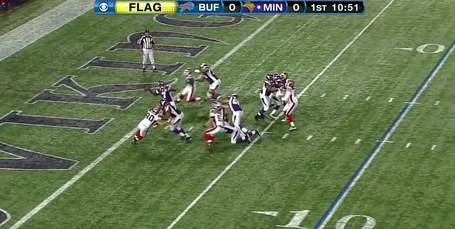 Pressure coming. Tarvaris fluidly lets it fly. I'd say the throw looks a LITTLE bit rushed as the pressure is coming from both sides but it's an adequate job on his part to stay in the pocket long enough to let the play develop. Also, as Tarvaris knows, it's a free play due to the offsides on Buffalo, so why not throw it up?

As you can see here, the deep safety sees what's happening but is too late in his pursuit of Rice. The pass is adequate. Enough loft under it to let Rice get deep, but strong enough and on-line enough to take the deep centerfield safety out of the play. The ball is underthrown though a bit - you'd like to have seen Rice catch it in stride but for a guy that just came off the bench and is making his second throw I can cut him a little slack (not to mention the throw is from the goal line and hits Rice at the 50). Jackson's slight inaccuracy here is where Sidney Rice becomes so valuable. 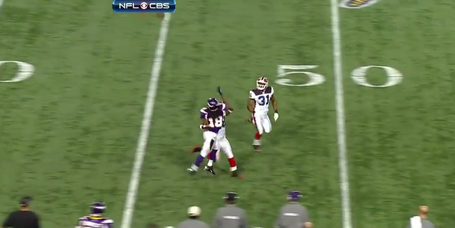 He stops up enough to get in correct position and the play almost becomes a back shoulder throw - something that is pretty unstoppable when you have a corner trailing and not looking at the ball. Rice adjusts his body in the air, makes the catch, and comes down with the ball for a 46 yard gain. Not bad for a 3rd and 10 on your own 10 yard line.

This is the type of play people remember Sidney Rice making and it's what you hope to get from him in Seattle. An ability to make plays and keep the chains moving. Dominate corners and bring down the ball in traffic. For a team with inexperienced and, frankly, middling quarterback prospects at the moment Rice's skills should be tested frequently.

I'm not saying this is the standard but it is merely the 3rd play I ran across in my infancy of research on the two. I'll share more plays, good and bad, down the line but thought this could be as good of a start as any.