I picked out this play because forcing turnovers is the absolute first priority for Pete Carroll's defense. It has been, and always will be the most important job of the defender to get the ball from the opposing offense. It's the core of his philosophy and you will hear him talk about it umpteen times every week.

Now, he's with the Seahawks, and nothing has changed. "It's been our main theme and our approach in our football for as long as I can remember," Carroll said. "It's about taking care of the football and getting it. It's not just one side, it's not just giving up (the ball), it's getting the ball, too. The defense can balance out a mistake or two by an offense by taking the football away. So it's the No. 1 emphasis in the program."

Sometimes, using the wrap-punch technique to try and cause a fumble when tackling a ball carrier can be ill-advised. The reason being, in a lot of cases, is that a defender will try to punch the ball out, lose their grip on the runner, and miss the tackle. Not only this, but other times the runner will drag the defender five or so yards before tripping up - it's only logical that if there's a guy draped over you trying to get the football it's easier to keep the legs churning than if, instead, the would-be tackler is wrapping up your legs.

In some cases though, you love to see your defense trying to strip the football whilst making their tackles at the risk of getting dragged a few yards. Especially if it's a wonderfully textbook execution of the aforementioned technique. In this case, Marcus Trufant is one of two tacklers, and this is the ideal situation to use the punch to force a turnover.

Ultimately, I break this down for no other reason than it's just a fundamental, badass play by Troof. Let's take a look. 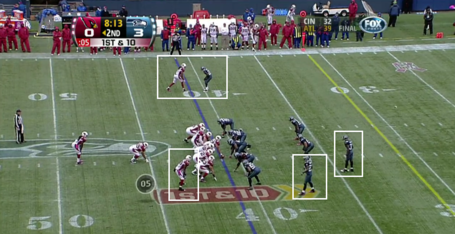 We've got Walter Thurmond lined up in press coverage on Larry Fitzgerald to the outside. Marcus Trufant is lined up at the bottom of your screen on the wingback here, tight end Ben Patrick. Patrick is set to go in motion to the left here and Trufant will follow him across to the other side. In the secondary, I've placed a box around Lawyer Milloy, who will be a part of the play. 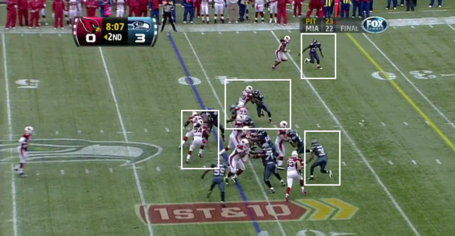 The play is a run up through the B gap and is well executed by the Cardinals. Tim Hightower goes untouched for about 7 yards before Milloy, in pursuit to the bottom of your screen, catches up to him. 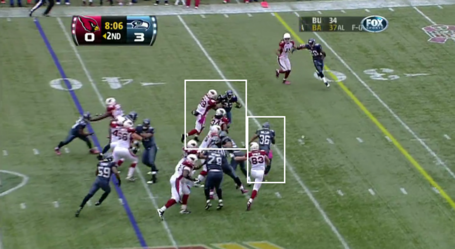 Here you can see Marcus Trufant and Lawyer Milloy closing in on Hightower. 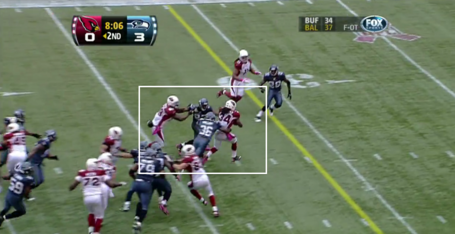 Excuse me, I was wrong, Hightower is already 8 yards deep by the time Milloy and Trufant have him wrangled, and they're about to get dragged for a few yards as well. Here's where Trufant makes a sick play. 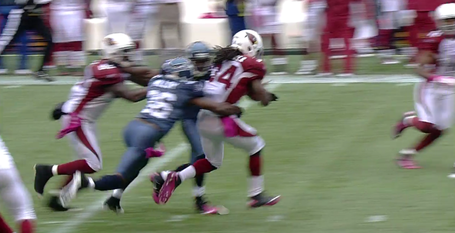 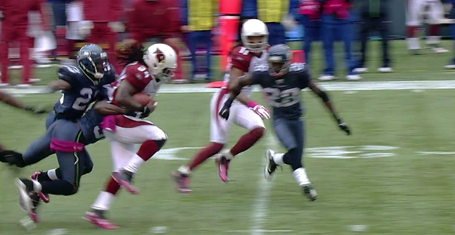 You can see above that Milloy has Hightower wrapped up so Trufant knows he can take a chance at the ball. And he does. Perfectly. 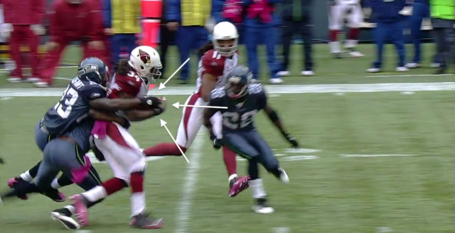 Fist on ball. Ball on ground.

Trufant even recovers the fumble as well. In super slow motion, like I've broken down for you, it's not as impressive, really. When you watch the play in full speed, not even the announcers know that it's a fumble until probably 10 seconds after Trufant recovers it. The speed in which the play happens makes the technique Trufant uses to force the fumble that much more impressive. This kind of thing gets me jacked up.

Simply put, this is what the Hawks need to do. Their defense is built upon the premise of "bend but don't break." If you're deep, never let the ball get over your head. Make a team methodically march down the field using short passes and eating up small chunks of yardage at a time. Make the offense cough up the ball.

Unfortunately, the Seahawks 'broke' quite a lot in 2010 and didn't get enough turnovers to give themselves a chance. That's something they'll be looking to improve on in 2011. The turnover ratio is of paramount importance to Pete Carroll and that philosophy will trickle down to the players.

Get turnovers. Get the ball. Make a play.

Man, I can't wait for some football.