I mentioned Daniel Fells in my post assessing the Seahawks' tight end position and thought he could make sense as a free agent target. It's uncertain how many tight ends will even make the Seahawks' roster this season - they currently have five under contract - but as we saw last year, Pete Carroll and John Schneider are not shy about roster churn. With that in mind, I would be remiss if I didn't point out some possible free agent targets and Daniel Fells, in my mind, could fit in the offense the Hawks are installing here.

Fells is a big, pass catching TE at 6'4, 272. He caught 43 passes last season for 391 yards and 2 TDs. While those are fairly modest numbers, if you compare to John Carlson (31 catches for 318 yards and 1 TD) he starts to look interesting - (and you start to realize how little Carlson was actually used in the pass game). There are a few main reasons I've zeroed in on Fells. First, he's still young, only 27, and is more of a bruising H-back type of tight end than either John Carlson or Cameron Morrah. At 272 pounds, Fells is big enough to act as the fullback when needed but can also line up in-line or on the wing to catch passes. Carlson was used a bit in this fashion in 2010 but it seems to me that his strength is in running routes and not lead-blocking.

Secondly, it appears that Fells is on the outs in St Louis after the Rams drafted TE Lance Kendricks in the 2nd round. If he is an unrestricted free agent under the new CBA, he could come relatively cheap and could play a key role. Currently the Hawks have a developmental player in Jameson Konz and a practice squad flyer in Dominique Byrd as depth behind Carlson, Morrah, and Anthony McCoy. If they're looking for more of a sure-thing 4th guy there (with the ability to actually take the job away from any those three), Fells might be an option.

Further, I'm not entirely convinced that John Carlson is on solid ground with this front office. Not that I am advocating this, but Carlson is in his contract year and thus could become trade fodder for John Schneider and Pete Carroll. The Seahawks are deep at the tight end position, drafted McCoy and Konz last season, and picked up Byrd - so the idea of trading Carlson for picks, something the Hawks love to stockpile, isn't out of the question in my mind. If that's the case the Hawks may look to add depth, and Fells seems to have that 'nasty' that Tom Cable likes and is a pretty versatile player. Just a thought.

To sort of give you an idea of how I could see Fells being used in the Hawks offense, I picked out a play the Rams ran against the Hawks in Week 17 last season. Here's the situation: 1st snap of the 2nd Quarter, Hawks leading 7-0. Jon Ryan has pinned St. Louis down inside their 10 yard line and the Rams are trying to give themselves some breathing room. On a 2nd and 6, they run a play action roll-out pass to Fells and they convert it for a first down with the help of a Daniel Fells stiff-arm. Here's the play: 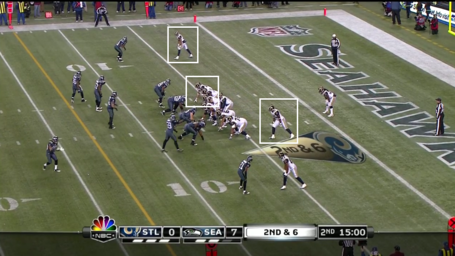 Rams lined up in a 2TE, 2WR, 1RB set with TE Michael Hoomanawanui in-line to the right, Fells offset back to the left as a wingback of sorts, and Steven Jackson in the backfield. WR Laurent Robinson is about to come in motion to the left. Hawks are in what looks like a Cover-3 with Lawyer Milloy dropping back on the snap and Earl Thomas coming in for run support. 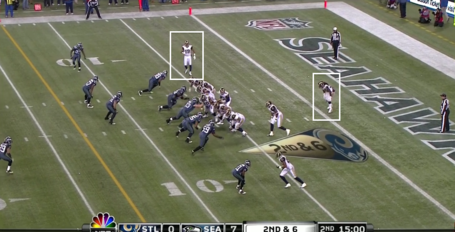 Ball is snapped. It's a play-action half roll-out to the right. You can see where WR Robinson has motioned in, and Steven Jackson is just coming out of his stance. The Hawks are expecting a run here with the Rams so far backed up into their zone and Earl Thomas is eyeing Jackson in the backfield. Fells hasn't moved just yet. 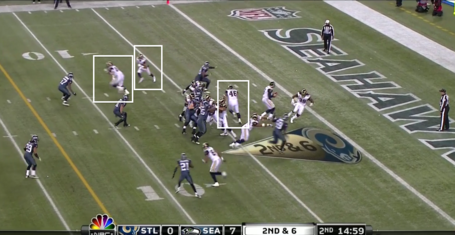 As Sam Bradford rolls out you can see Michael Hoomanawanui releasing downfield which leaves Raheem Brock with a clear path to the QB. Fells has now pulled behind the line to the right and will be Bradford's target. 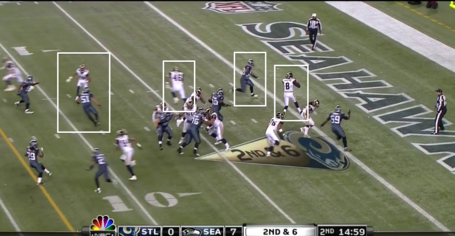 You can see Brock closing in and Bradford dumps it off to Fells just in time. Laurent Robinson has come in to block Lofa Tatupu. David Hawthorne manages to avoid any block and is on Fells with a decent angle. This is where Fells' size and physicality come into play. 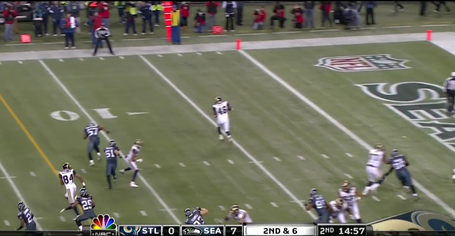 Here's the shot of Fells reeling in the pass, looking downfield, and he sees that he has to beat Heater to the edge. 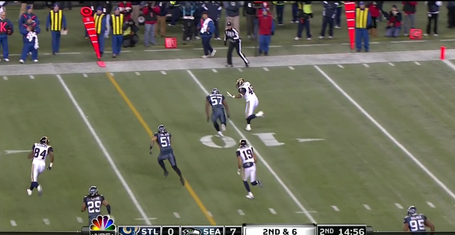 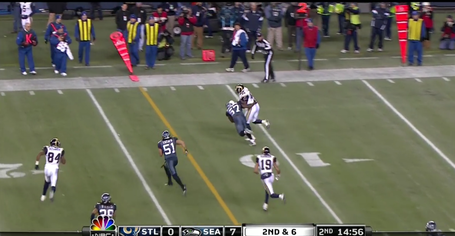 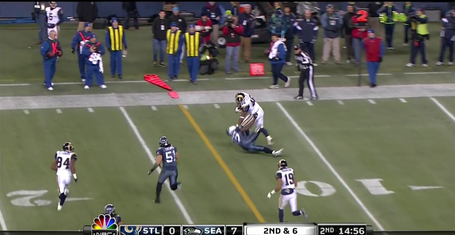 Daniel Fells administers a cringe-inducing stiff-arm to the face on Heater and runs for a few more yards before Hawthorne is able to trip him up. It's not like I enjoy watching a Seahawks player on the receiving end of something like that, but a well-placed and malicious stiff arm never fails to impress me.

As I mentioned before, I remember seeing Fells make some plays last season and thinking to myself how much I liked his style. He's ferocious on the field - this stiff arm is just one example - and I remember seeing him just plow through would-be tacklers on a few occasions. I wouldn't mind seeing this type of toughness on our side - I've never been a big fan of the finesse oriented offense the Hawks have fun recently. One of the main cruxes of running a west-coast style offense is that you must get yards after the catch. Short, timed horizontal passes to big, tough receivers and tight ends. This is how the 49ers of old made their money and how the offense caught on. If the Hawks plan on running this type of O, to succeed, your receivers have to be big and able to break tackles. The play above is a pretty classic west coast play - short passes augment the run game - and Fells does what he's called upon to do by getting the first down.

If anyone on our tight end corps has the ability to play like this I would think it would be Anthony McCoy, and Pete and JS seem pretty high on him - perhaps Fells has drawn similar interest? I know there are probably a lot of players with similar skill-sets as Fells, but this play stood out to me in that it was against my beloved Seahawks. Keep your eye on the Ram once free agency hits because he may be changing teams.