In part one of this mini-series I broke down some statistics on the use of 6OL and even 7OL sets in the Oakland Raiders' offense from 2010. Because Tom Cable undoubtedly had a large influence on the running game and the offense in general there, it stands to reason that some of those philosophies and schematics could come to Seattle.

6OL and 7OL sets can cause confusion on the part of the defense because it creates one, two, or more (depending on tight ends) extra gaps (a gap is designated as the 'hole' between the center and guard, guard and tackle, tackle and tight end, and the hole on the outside of the tight end) that the defense has to account for. Typically, the defensive linemen, linebackers, and safeties will all have a gap they're responsible for, and adding an extra offensive lineman or two can be a headache for the defense. When you have a tackle eligible for passes downhill, this exacerbates the confusion. When you add a tight end or two and a fullback and running back that can catch passes out of the backfield, you're really forcing the defense to quickly recognize assignments.

If you add the wrinkle into the offense that the quarterback could be a runner - you're really making things hard for the defense. Now, Matt Hasselbeck isn't going to scare anyone with his running ability but if you trot a guy like Isaiah Stanback or Michael Robinson out to take the snap from under center, that is just one more player the defense has to account for.

This ability is something that the opposing defense will have to account for and practice for - and will be useful for the Seahawks even if they only run it one time a game. The point is, that if a team has to prepare to face a look like this, they are spending less time preparing for what a team will be running a majority of the time. This is why sets like these and the Wildcat are still alive and will probably still be featured for several teams in the NFL. The surprise factor is always at play.

So, needless to say, I'm intrigued to see how the Seahawks use these sets and I'll look deeper into how the Raiders used them as well in the next week or two.

Cable used OT Khalif Barnes as his sixth offensive lineman most of the time and even had him report as an eligible receiver in some cases. Barnes caught a touchdown in week 9 against the Kansas City Chiefs in a pretty cleverly designed play. This was a fun example so I'll break it down for you here. Week 9, Kansas City at Oakland 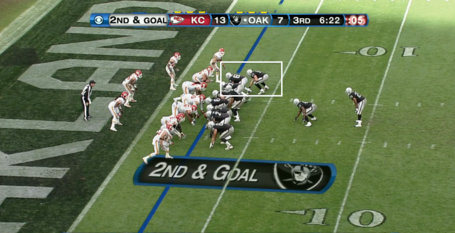 So as you can see above this is a JUMBO jumbo package. 6 OL, 2 TE. You've got 7 on the line plus a tight end just set up off the line. I've placed a box around the T Khalif Barnes, the far lineman on the top of the screen, and TE Brandon Myers, just behind him to the right.

You've got Marcel Reece at fullback and Michael Bush as the tailback. Goddamn, I love this set - if there's a power set more powerful than having 6 offensive linemen, two big tight ends, and essentially two fullbacks (one true fullback in Reece and one 'might as well be a fullback' in Bush) in the backfield I'd like to see it. I really hope Cable brings some of this to Seattle. 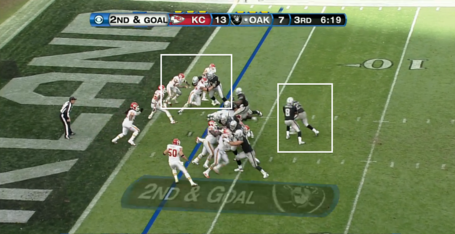 Ball is snapped and you can see it's a play action fake to Bush, with Marcel Reese streaking up the middle through the hole. Myers and Barnes set up with a delayed release by blocking their men to the inside of the field. 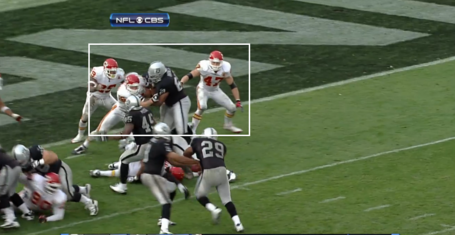 Here's another look at the play action fake. You can see the safety Jon McGraw eyeballing Michael Bush and Jason Campbell here, and he's making sure to set the edge. You can't really see Myers from this angle but he's directly in front of Barnes towards the endzone, blocking. 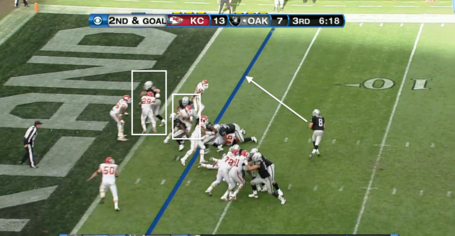 Campbell rolls out as Myers releases to a shallow corner route and Campbell sells that the tight end is his target beautifully. 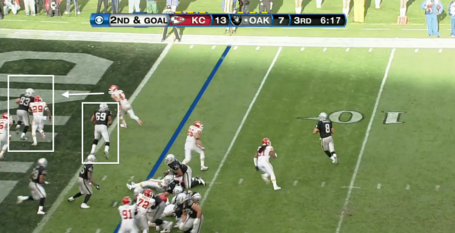 At this point, KC's DB McGraw breaks off pursuit of Campbell and looks to TE Brandon Myers, who is running a drag route about 4 or 5 yards deep in the endzone. Little does he know that OT Khalif Barnes, an eligible receiver on this play, has also released into a delayed drag and is now wide open. You can see in the above screenshot that McGraw has his eyes on Myers and doesn't see Barnes. 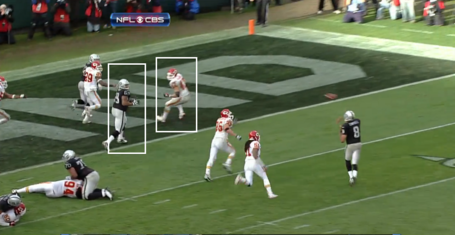 Here is Campbell making the throw. By the time McGraw sees Barnes it's too late.

This is a good example of the Jumbo sets that Cable liked to run in Oakland, because everyone loves a touchdown. It should also be noted that Khalif Barnes is a free agent, so you can't necessarily count him out as a target for Cable once the lockout ends.

Now, obviously this play would be the extreme outlier of the practical use of 6 and 7OL sets. The Raiders ran 6+OL sets 124 times in 2010 and in the vast majority of these plays, -specifically all but two-, Khalif Barnes did not catch a pass. In part three of this series, I'll try and highlight a few less glitzy plays to give you a better idea of how these sets could be used here in Seattle next season. Stay tuned.