Share All sharing options for: The Najeh Davenport Memorial Tournament aka The NFL's Worst Roommate Bracket

In 2002, Green Bay Packer Najeh Davenport snuck into a woman's apartment and pooped in her closet. I don't care what the context was; none is necessary for one human pooping in another human's closet. It is, however, my favorite athlete arrest of all time and it's high time it was honored as such. Closet-crapping is a lot funnier when it happens to someone else, however, and if Najeh is davenporting on other people's floors, one can only imagine how often he's done it at his own place. He would have to be among the worst NFL players to ever have to share a living space with.

So, it is with Davenport's fecal felony in mind that I present you -- the sophisticated, intellectually-elite readers of Field Gulls -- with the chance to vote in the NFL's Worst Roommate Tournament.

I believe that I am uniquely qualified to govern this tourney*, as my college years (and post-college "find myself" years) saw me share houses with over 30 different people. While the overwhelming majority of my roommates have been great to live with, my sample-size is large enough to have seen just about everything when it comes to irksome domestic characteristics. I am not exempt from some of those characteristics myself, but that doesn't mean I don't know a bad roommate when I see one.

*I believe I'm uniquely qualified to govern most things.

Now, some parameters: This tournament is limited to players who are currently active, which eliminates would-be contenders like Ryan Leaf, Keyshawn Johnson, and Mike Vanderjagt. Current free agents like Terrell Owens are eligible, however. Also, the reasons for inclusion in this tournament are open, so it's not limited to criminals or tools or whatever else immediately jumps to mind as a qualification. Lastly, this will be an eight-player bracket, to be voted on one match-up at a time. The winner receives the Jeff Reed Trophy, which is just a bottle of Smirnoff Ice.

I have chosen eight participants who will be revealed in couplets with each match-up article. However, I don't claim to have thought of the best (worst) eight, so suggestions are welcome in the comments section after you vote and I'm open to including them in the bracket.

Again, your reasons for voting are undefined for the purpose of this tournament, so please feel free to include your thought-process in the comments section as well. I'm also taking suggestions for future match-ups on Twitter, @JacsonBevens

Cortland Finnegan (CB, Tennessee Titans) -- I once lived with a guy who was pretty fun, outgoing, etc. He was also the roommate that not only knew what everyone else's buttons were, but reveled in pushing them. Accidentally use the wrong preposition? He'd bring it up to try and prove your intellectual inferiority the next time you had a disagreement. Insecure around girls? He'd ask you about it when a girl was over. Shit like that. He was just the kind of guy who you could never let your guard down around and that makes for a tense household. I mean, you'd still go pick him up if his car broke down, but only because he's your roommate, not because you're inclined to help him out. Finnegan would be that guy.

Finnegan's punk-ass side was revealed nationally when he went all Napoleon-syndrome on Andre Johnson. It was like watching a terrier bite the ankles of an unsuspecting rottweiler because it knew it's owner would step in before the big dog could do any real damage or an American League pitcher throwing at a batter's head because he knows he won't have to step in the box himself. When all-time Seahawks quarterback (and by all accounts, one of the most helpful guys in the league) Matt Hasselbeck, was signed by Tennessee, Cortland said, "I don't know if he fits what we need." I'm not saying he's not allowed to have that opinion, I'm just saying there's value in tact, especially in a team setting, and it's saying stuff like that that would make Finnegan a real pain in the ass to live with.

Also, what the shit kind of name is Cortland Finnegan? Sounds like Tom Bombadil's nephew or some kind of spritely aid in "Magic: The Gathering." Get a real name, dude.

Jay Cutler (QB, Chicago Bears) -- Jay Cutler is on here for a few reasons, not the least of which is that this is Jay Cutler's face:

Jay Cutler is the guy that sulks all the time even though he has no reason to. Guy, you're a starting quarterback in the NFL. You are a celebrity with millions of dollars. The vast majority of civilization would trade places with you tomorrow. Stop walking around looking like your girlfriend just dumped you on the same day your favorite emo band signed with a major label.

That picture above, by the way, is not one of an upset Jay Cutler. That's what Jay Cutler looks like all the time.

Jay Cutler (when he's stealing some of your cereal): 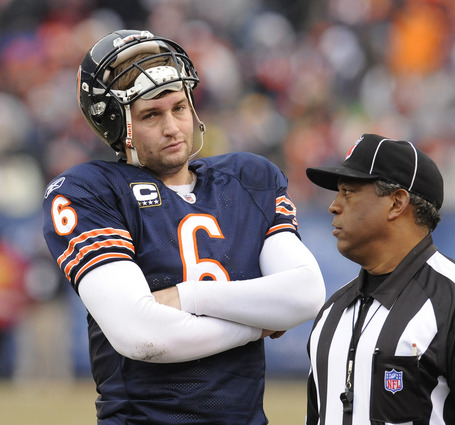 Nobody likes a guy who pouts the time, and no one pouts more than Jay Cutler. The reason we invented the Philip Rivers Drinking Game (one drink every time Rivers pouts or whines) isn't because Rivers is the most petulant QB, it's because the Jay Cutler Drinking Game would put the majority of the NFL's viewership in the stomach-pumping room of their local ER every Sunday.

So there you have it -- Cortland Finnegan vs Jay Cutler. Now vote!