The Seahawks Replay Booth: Alan Branch "Tore Us Up"

Share All sharing options for: The Seahawks Replay Booth: Alan Branch "Tore Us Up"

Though I'm sure one game didn't dictate the Seahawks' decision to aggressively pursue DT/DE Alan Branch in free agency, Week 7's matchup with the Cardinals definitely left an impression on the Hawks' coaching staff. Branch had a hell of a game against the Seahawks in Week 7, notching five tackles, two sacks, and a forced fumble. Pete Carroll acknowledged this while explaining why they wanted him so badly, noting, "Alan Branch was a really important guy to get. He tore us up last year. He is a guy that has not been maybe recognized yet and we're hoping to bring him out. He's one of those guys that needs to emerge into the talent level and the potential that he has. Hopefully we're going to be able to do that and he'll help us."

Like Carroll noted, Branch is a guy that needs to live up to his potential -- he was the 33rd pick in the 2007 draft out of Michigan but more or less busted in Arizona, starting only three games in four seasons there (all in 2010). He has played at the nose tackle position, the undertackle position, and even the defensive end spot so he's a scheme versatile guy that can be plugged in at different spots and in different situations. Whether Pete can bring out that potential is another question, but Branch has got the physical makeup to have some success in the Seahawks' system.

At 6'6, 338 he's definitely big enough to play on the interior of the line, and that's where the Seahawks have announced he'll be starting. He'll be next to Mebane at the 3-tech position for the most part, and he's done enough 2-gapping to play on the outside as the 5-tech if called upon to do so. Let's take a look at some of the reasons he may have been on the Seahawks radar this offseason -- the Seahawks' Week 7 matchup with the Cardinals, and I'll review three plays in particular.

On this play you see the Hawks in their goal-line set with three tight ends, Michael Robinson at fullback, and Marshawn Lynch at tail back. John Carlson goes in motion to the left, and the ball is snapped. Alan Branch has a box around him, and he's playing the 3-tech, shading the weakside guard. (after the jump...) 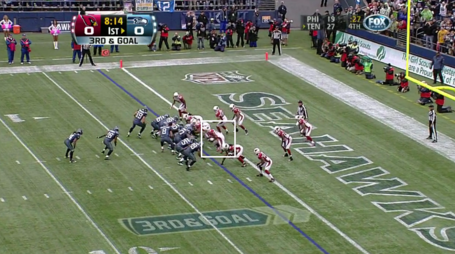 You can see Mike Robinson leading the way here below, and Matt Hasselbeck is about to hand it off to Marshawn Lynch. I've boxed where Branch has made his penetration. It's either a total miscommunication on assignments by the Seahawks, of just a slow get-off by Locklear, but Branch knifes through the line virtually untouched.

Below, you can see Lynch about to take the handoff but Alan Branch is already almost upon him. The play is already blown up by the quick penetration by Branch.

You can see below that the Seahawks are lined up in a 3WR set with Carlson and Forsett lined up on either side of Matt Hasselbeck. Unfortunately neither one of them helps out much on this play. Branch is the DE lined up at the bottom of your screen, or on the left side of the defense. It's a 3rd and 10 situation, which helps Branch in this case because he doesn't have to worry about the run as much, but regardless, he gets a good jump off the snap and easily beats Sean Locklear. 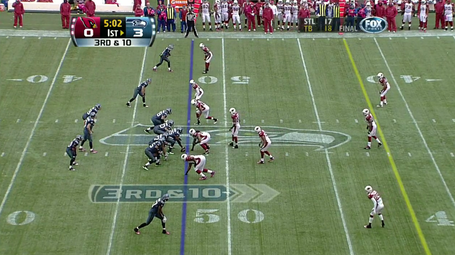 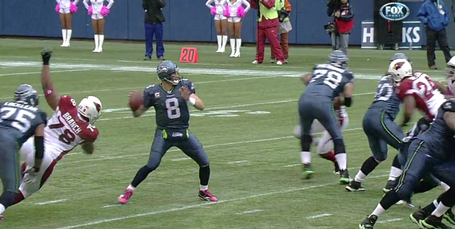 Here you can see Branch making the turn and displaying pretty impressive balance off the edge. This type of lean is associated with Robert Mathis and Dwight Freeney types when speed rushing from the defensive end spot but for a 338 pound guy to do anything resembling that, it's pretty cool. 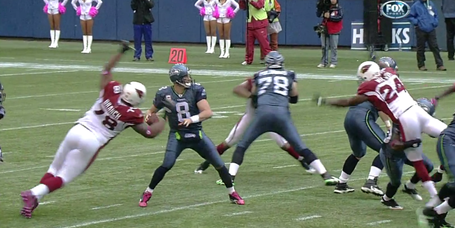 He never sees Branch coming. In Locklear's defense, not that he really deserves much here, Hasselbeck held on to the ball a tic or two too long, then failed to see the pressure coming, and failed to step up into the pocket. Branch strip sacks Hass and the Cardinals recover the football.

Another third down situation where Branch made a difference (and the second third and goal I've shown here). Hawks in a three receiver set with Forsett lined up next to Hasselbeck. Branch is lined up as a 3-tech, shading the weakside guard, and LB Joey Porter is to his right on the edge.

You can see on the snap that Forsett releases left into the flats as a check down option for Hasselbeck. I've placed a box around Alan Branch and linebacker Joey Porter, and pictured you can see Porter stunting under Branch as Branch gets a good push on LT Tyler Polumbus.

Below, you can see that LG Mike Gibson has picked up Porter quite well but Polumbus isn't having an easy time with Branch. Branch is into him and Polumbus is unable to anchor on this play.

Above you can see Branch essentially just push Polumbus back and again, Matt Hasselbeck has held onto the ball for much too long. At this point, you would have liked to have seen him throw the ball away.

Too late. Branch is upon him. Hasselbeck sort of throws it down the seam to John Carlson but it only gets about half-way there. I hate to point out mistakes by Polumbus because I feel like he did a pretty decent job last season filling in for Okung at left tackle, but this time the bullrush by Branch was too much.

Branch had one more sack in this game as well but I think you can see why the Hawks liked the guy. He didn't really perform consistently the rest of the season, but if Carroll and co can get him to perform like he did against us last season, we could be in good shape.

More realistically, I think you can hope to see Branch on the field in passing downs, much like he was used against the Seahawks in Week 7, trying to get into the backfield and generally being disruptive.