Ok, so I finally got myself situated with the game replay, so I'll provide some notes. I'll try to keep it fairly succinct, but try and pick out a few key plays the Hawks made. It is the preseason, but it's just good to be watching football again.

Seahawks start out on their own 20 yard line.

1st and 10: Marshawn Lynch runs right out of an unbalance 2TE set (Zach Miller, John Carlson). Miller chips off the DE, and trips before he can get to the second level. Lynch picks up two yards and the SD defense goes crazy like they just forced a turnover. Whatever, I'll take positive yards on a first down.

2nd and 8: Hawks in 2WR set (Isaiah Stanback, Doug Baldwin) with Lynch in the backfield and Michael Robinson at FB. It's a run right again, and FB Robinson does a good job picking up the defensive end. Lynch runs for about 2 yards again. Decent push by the O-Line.

3rd and 6: This is the 7 yard slant route catch by Doug Baldwin. Nice play all around. Tarvaris Jackson did well against the blitz by keeping his eyes downfield and connecting with Baldwin.

1st and 10: Hawks in 2WR set again (Stanbeck/Baldwin) with Lynch/Robinson in the backfield in an offset I. Robinson slides in motion to the left and the ball is snapped. Big James Carpenter lays out a nice little cut block on the DE that buys Jackson some time. He doesn't see his first read to the right, jogs left, and hooks up with Golden Tate in the flats (who has done a darn good job of coming back to the ball -- good to see). Tate runs for about 5 yards.

Carpenter dispatching his enemy. Moffitt standing over him saying "STAY DOWN, CHIEF."

2nd and 5: Hawks in 2WR, 2TE set with Lynch the lone back. Lynch runs left, finds a nice hole, and picks up 4 yards before getting met by the defense. Robert Gallery inexplicably ANNIHILATES Golden Tate, who is sort of blocking, sort of just standing there in the pile. See below: 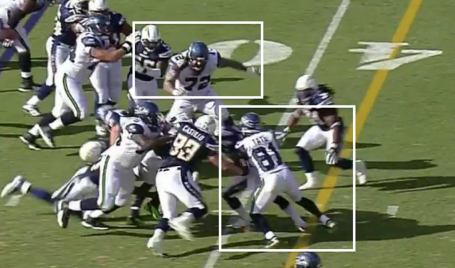 Here you can see Tate: "Dum dee dum dum, I'll block this guy... kinda, just getting involved downfield!" Above, you can see Robert Gallery in BERSERKER MODE on a mission to move the pile forward for a first down. 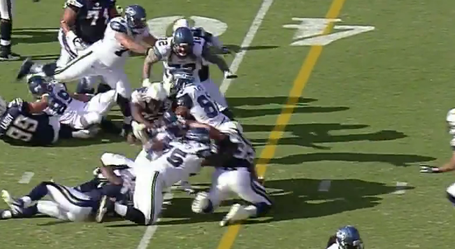 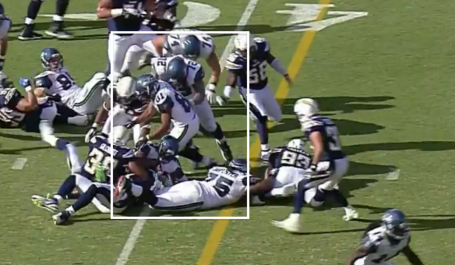 This is Robert Gallery in his patented "KILL MODE". Poor Golden didn't even see it coming. 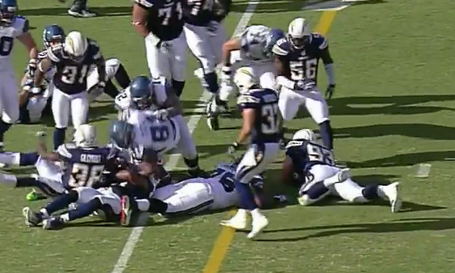 WHAMMO!!! Robert, what the hell are you doing?? I would loved to have been in Seahawks film-review meetings for this one.

Anyway, Lynch picked up 4 yards, and Tate picked up a ruptured spleen.

3rd and 1: Seahawks in a 2WR set with Leon Washington, Michael Robinson in the I-formation. Tate goes in motion towards the line from the right wing. You'll remember 3rd and 1 situations weren't kind to the Seahawks in 2010 so this is the type of thing to watch.

The play is up the gut with Robinson acting as the ramrod. 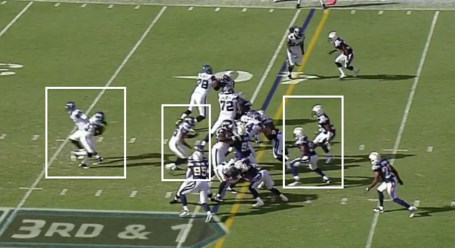 Decent push on the line, at worst each player holding his own. Then.... something happened. 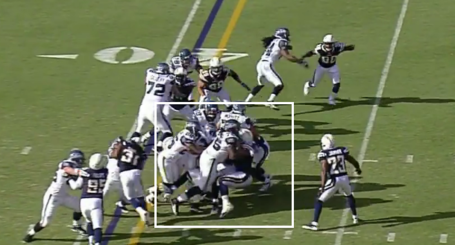 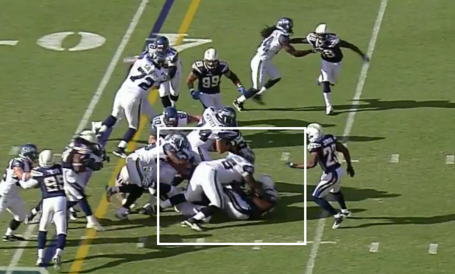 1st and 10: the Chargers jump offsides, free play. Tarvaris throws it deep up the middle but a little too high for Zach Miller to reel in.

1st and 5: Ugh. Good (enough) protection as Tarvaris drops back to pass. He doesn't see anyone open, so instead of stepping up into the pocket to buy some time and/or run/throw it away, he decides to run backwards about 15 yards and then intentionally ground it. Not a good play here.

2nd and 21: Jackson in the shotgun. Ball is snapped. Again, Jackson doesn't see anyone open and is flushed from the pocket. Uses his legs to pick up about 7 yards to the left.

3rd and 12: Draw play to Washington for about 7. Vanilla, but smart. The Seahawks punt.

Overall, the first drive wasn't terrible. Obviously, it didn't end in a score, but there were some good takeaways. The run blocking was decent. Really, the pass blocking was adequate as well. The sack/intentional grounding play really hurt the Hawks and if Tarvaris gets into a habit of that kind of thing we could have problems. I know this is one of the knocks on him so it will have to be addressed.

I'll continue to break down the game, but obviously with a little less detail going forward. (I did say I'd try to be succinct... didn't quite happen). I just wanted to focus on this first drive because the plays are typically scripted and it was the first team guys doing their thing.